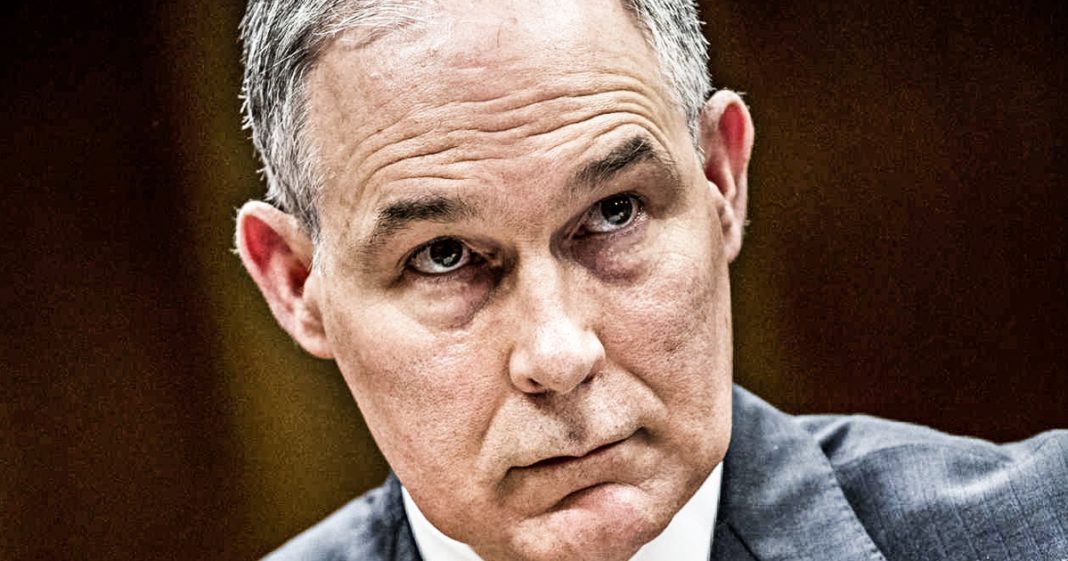 A new report from The New York Times says that aides working for EPA director Scott Pruitt view tending to Pruitt’s personal life as just a regular part of their jobs. And since the EPA isn’t working on actually protecting the environment, the entire agency at this point exists to cater to Pruitt’s every whim. Ring of Fire’s Farron Cousins discusses this.

Scott Pruitt, the administrator of the Environmental Protection Agency, is currently under at least 12 different investigations, and according to a recent report in the New York Times, aides, the people who work for Scott Pruitt at the EPA, have said that basically, running Scott Pruitt’s personal life is just part of their everyday job now, and since we now the EPA’s not doing anything to actually protect the environment, you could make the case that this entire agency at this point is only working on Scott Pruitt’s personal life. Let’s get one thing straight here: it is absolutely against the rules of these offices, the one that Scott Pruitt holds, to use your staff, who are being paid by the US taxpayers, to do your personal bidding.

Not one person at the EPA is in charge, or technically even allowed, to do anything related to Scott Pruitt’s personal life, and yet we know that he’s had them drive him around to different Ritz-Carlton hotels looking for a special hand lotion, we know that they’ve looked into buying a used mattress from Trump Hotel, we know that they tried to land his wife a job at Chic-Fil-A, and we know, we know, we know, we know all of these things that have happened, and now, according to this New York Times report that actually spoke to people that are working for Scott Pruitt, this is just part of their daily life. Breaking the rules of the federal government, being funded by the taxpayers, getting their salaries from the taxpayers and instead of using that to protect the environment, they’re using it to get Scott Pruitt lotion. They’re using it to go look for a house for him, to make personal phone calls, to reach out to donors, to get his daughter into a better college at one point was something they had to do. This is insanity.

I mean, I have been covering American politics for close to 15 years now, and I have to say, I don’t think I have ever seen the level of corruption and downright stupidity that we have seen out of Scott Pruitt. This is utterly amazing, how many rules this man can break, how flagrantly he can just flaunt the fact that he’s breaking the rules, and never ever, ever face any consequences for doing it. And do you know why that is? Well, Trump said it best last week, when he said, “Scott Pruitt is doing a really, really good job at the EPA.” And that sentence tells you everything you need to know about what this administration thinks him, about what the Republicans think of him. They will never do anything to remove Scott Pruitt from office. As long as he continues to deliver for their donors, as long as he takes away pesticide regulations, which he is, as long as he lowers air pollution standards, meaning they can spew more stuff into our atmosphere, they’re gonna let him stay, which he’s currently doing.

As long as he lets them dump more poisons in our rivers, lakes and streams and aquifers, they’re gonna let him stay, and he’s also currently doing that. Corporations love Scott Pruitt. Corporations give lots of money to Republicans. It doesn’t take a genius to put two and two together. Scott Pruitt can break all the laws he wants because as long as he delivers for these corporations, Republicans will never touch him.