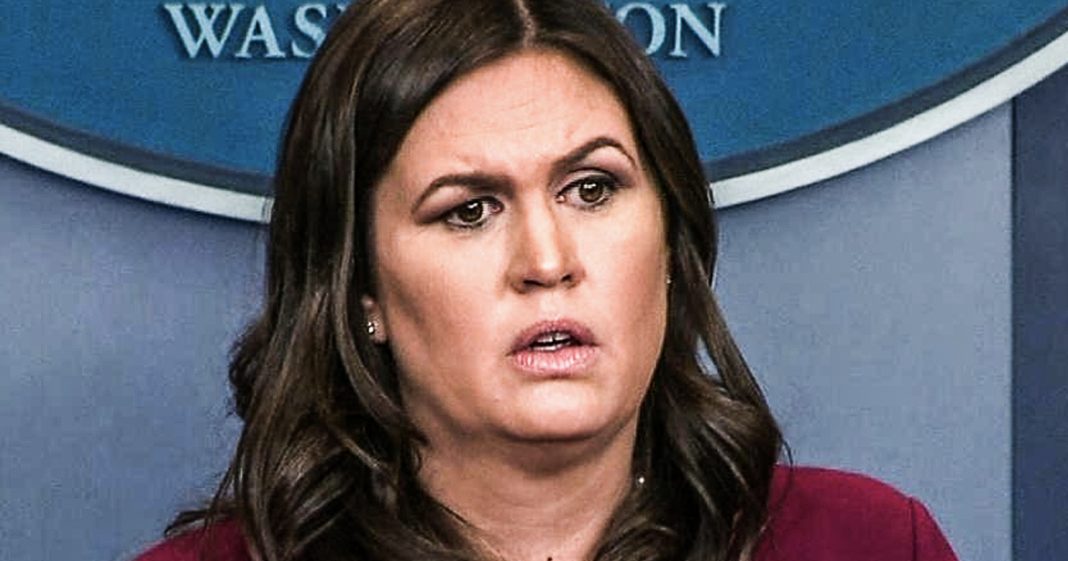 A recent Politico report says that the White House Communications Office, which is currently without an official director, is losing staffers at an alarming rate and suffering from very low morale. With more staffers planning to leave in the coming weeks, the last woman standing may be Sarah Huckabee Sanders, which isn’t going to work out well for anyone. Ring of Fire’s Farron Cousins discusses this.

After Hope Hicks left earlier this year as the director of the Office of Communications for the White House, she was never replaced. So this kind of makes Sarah Huckabee Sanders the defacto leader of that entire Office of Communications. What’s happened since Sarah Huckabee Sanders kind of became that defacto leader is that she is losing staffers left and right.

A recent report by Politico actually talked about the fact that this office seems to be bleeding staffers at this point, and the office is actually not able to replace them because there’s nobody that wants to take those jobs. They also are predicting several other staffers are going to be leaving in the coming weeks, which begs the question, is Sarah Huckabee Sanders going to be the last woman standing in the White House Communication’s Department? Is this why we saw the report last week that said she’s thinking about quitting? Because if I were here and you see all of the rest of the staff running for the exits, I would be packing my stuff up as well. Because if you’re the last one there holding the bag, understand that all of the blame, all of the fault, all of the responsibilities fall onto you.

Sarah, you’ve already proven that you can’t even handle going out five days a week and talking to the press for 45 minutes to an hour. You can’t tell them the truth. You can’t seem to do the job that you’re supposed to be doing so why on earth would you think that you can probably handle this entire department by yourself? My guess is that you don’t think you can, but that’s where you’re headed. Nobody wants to come work in that office, nobody wants to work for Trump, and more importantly, nobody wants to work for you. They know what kind of person you are. They know what kind of person you’ve become under Trump. I don’t know anything about your life, to be honest with you, before you joined this Trump administration. So I don’t know if this is who you always were or this is who you’ve become, but either way, what you are now is not something that other people want to be associated with.

Since you are kind of the leader at this point, even though you don’t necessarily have the title, you certainly have the most prominence. You have the most direct line to the president so that does make you the leader there. If you can’t hold onto your staff, if you can’t handle the position that you were hired to take on, and if you can’t bother to tell the truth, then you need to listen to those reports from last week saying that you were heading for the exits. Because at this point, you don’t want to be the last one to walk through that door to go on to a better life. You want to make sure you beat everybody else to it so that you’re not the one who gets that entire crap storm of all of the press, all of the negativity, and all of the attacks from the President of the United States.

Sarah, you need to go into self preservation mode at this point. Every time you walk out there onto that podium, you’re doing damage to your credibility and your reputation, which is going to make it very hard for you to find outside work once you leave the Trump administration.

So, again, the best advice I can give you, grab a box, put all the stuff from your desk in it, head out the exit, and never look back.