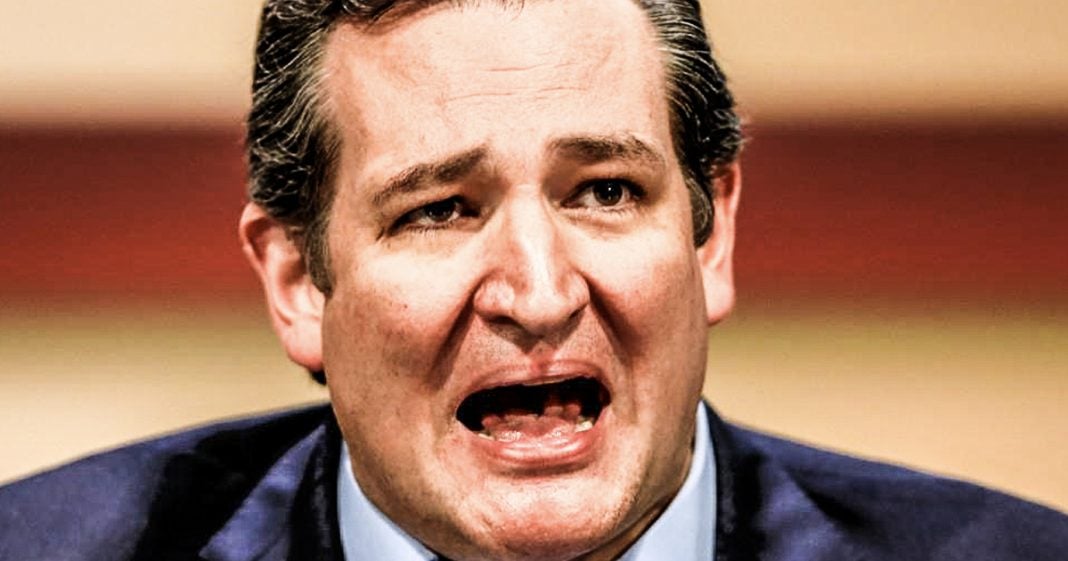 Ted Cruz and a small group of Republican Senators are trying to cut funding for the National Science Foundation because they believe that the scientific community is spreading propaganda. The propaganda in question is the science of climate change, and they point to an op-ed from 6 years ago to prove their point. There are about a million things wrong with their argument, but Cruz has never been one to care about the facts, as Ring of Fire’s Farron Cousins explains.

Texas Republican Senator Ted Cruz believes that science is propaganda or at least that is what he and three other Republican senators said in a recent where they’ve basically called to cut some funding from the National Science Foundation, and they want a criminal probe for potential violations of the Hatch Act into the National Science Foundation for doing nothing more than their jobs. Here is what has Ted Cruz so mad at the NSF, which he claims is now just a propaganda outlet. Ted Cruz and these other Republican senators, James Lankford, Rand Paul, and James Inhofe are all mad that the National Science Foundation is granting out about $4 million a year to help meteorologists around the country understand climate change and learn how to report on how it affects local communities.

That’s what has these senators so pissed off right now. That a science foundation is helping to fund science and educate people. They can’t stand it. Do you know why? I’ll get into all the specifics of climate change in just a moment, but here’s the thing. These Republicans, Ted Cruz, Rand Paul, Lankford, and Inhofe, they’re pissed off because the National Science Foundation is actually trying to educate people about what’s really happening to our planet. You know why it makes them mad other than the fact that these four receive more money from fossil fuel companies than other group of four senators in the country? It’s because if people become educated, if they learn about the issues, they’re less likely to vote Republican.

Republicans need stupid people because that is their base. Their base is stupid people. If they learn more, if they educate themselves, if we’re out there teaching them what science actually says, they’re not going to be stupid anymore and therefore they will be less likely to vote Republican and that’s what terrifies Ted Cruz. Now, he’s also mad that his donors in the fossil fuel industry, along with James Inhofe who takes more money than anybody from them, they’re mad that their donors might get pinged if everybody understands that we’re destroying the planet for fossil fuel production and consumption. But, that’s kind of secondary. The big thing really is they don’t want people to understand anything.

Back to the actual issue here. They’ve sent this letter. They want the office of ethics to investigate the National Science Foundation because they believe one of the groups that they are funding to provide some of this climate research and teaching is an activist group, advocacy group actually. They think it violates the Hatch Act because government agencies aren’t allowed to get involved in politics and they want an investigation even though this group has complied with everything regarding the Hatch Act since they started receiving federal money. In fact, they actually go through yearly training to make sure that they do not violate the Hatch Act. On its face, Ted Cruz’s claim falls apart.

They’re not funding propaganda. This group has been in compliance with every regulation available and they go out of their way to make sure that they do that. Can you say the same about the guy in the White House that you’re supporting? No, you can’t. Probably can’t even say the same about yourself, Ted and Jim and Rand and other Jim, but you guys don’t care about that. You want to let your donors continue to destroy this planet and you want to keep people in the dark about what science actually says because you think that somehow having a dumber populace, having a populace that gets poisoned by emissions from corporations, you think that’s somehow going to continue to win you elections.

Good luck with that strategy.