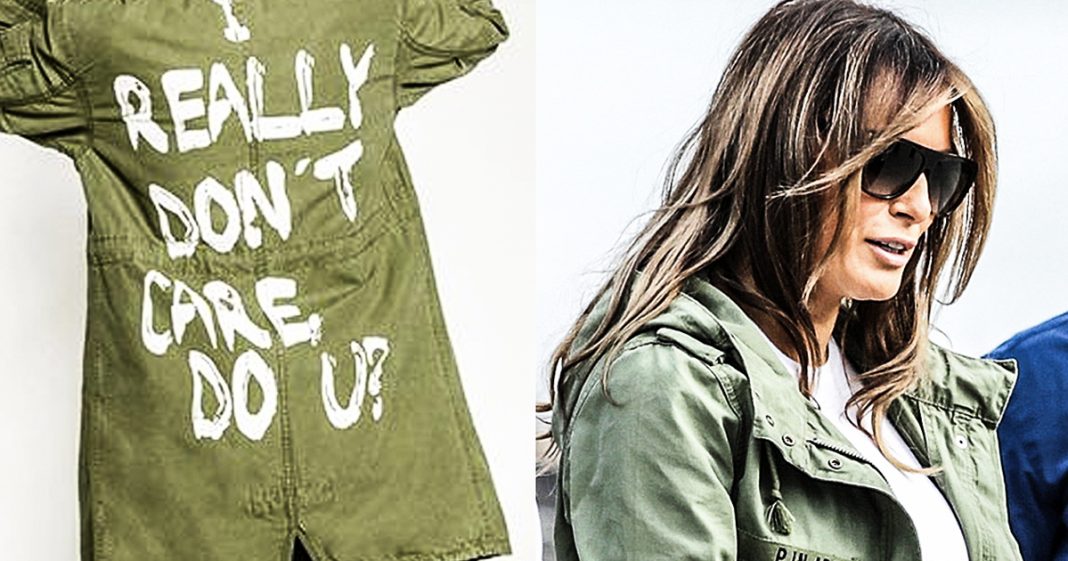 Melania Trump just destroyed whatever good will the American public had towards her when she boarded a plane to go visit detained migrant children wearing a jacket that read “I really don’t care, do u?” Her spokeswoman claimed that the jacket had no hidden meaning, while Donald Trump tweeted that the jacket was a dig at the media. Someone is lying, that’s for sure, but the bigger problem is that Melania is clearly just as heartless as her husband. Ring of Fire’s Farron Cousins discusses this.

I really don’t care, do you? That was the message scrawled across the back of the jacket that Melania Trump wore when she both boarded and exited a plane to visit detained children who had been separated from their parents, under Donald Trump’s policies. Now, she went there. She felt this would be a good photo op to meet with these children, to see what all the hubbub was about, and she couldn’t have screwed it up any bigger. All she had to do was show that she was a caring, compassionate human being. Or even less than that, just show up and not do anything completely heartless, and then she gets photographed in that jacket.

There’s several different things to discuss with this. First and foremost, her spokesperson for the Office of the First Lady, came out and said, “I’d hoped you guys would want to cover her visit with children today. It’s a jacket. There was no hidden message.” Well, yeah, I think we’re all pretty clear that there was no hidden message, because it was written in plain English across the back of her jacket. “I really don’t care, do you?”

And then, after they said there was no hidden meaning behind the jacket whatsoever, her moronic husband tweeted out the following, “I really don’t care, do you? written on the back of Melania’s jacket refers to the fake news media. Melania has learned how dishonest they are, and she truly no longer cares.” That tweet came from Donald J. Trump, President of the United States, husband of Melania Trump. One of them is lying. Either the spokespeople for the First Lady are lying that there was no hidden message, or Trump is lying about what that hidden message actually was.

The other thing we have to kind of discuss here, is the fact that Melania’s a former model. She does not put anything on that is not, at least somewhat carefully, thought about. This is the same woman that wore heels to go visit disaster victims. She always likes to look her best. There’s nothing wrong with that at all. This jacket, a $39 Zara jacket, how did she even manage to get this in her wardrobe? That makes no sense. This does not fall in line with any of the fashion choices that we have ever seen Melania Trump pick, so it is very weird. And the only thing you could really conclude from that, since it’s so out of the realm of what she’s done in the past, is that this jacket was chosen intentionally. Either that, or the other option is that a staffer had it as their jacket, and just kind of draped it around her without her even realizing it. Either way, the optics on this are absolutely horrible.

And yes, it may have been used as a distraction tactic to get people to stop talking about the actual policy, and instead, focus on the jacket. Whatever the reasoning is, whatever the rational, one thing is for certain: We no longer have to pretend that Melania Trump is not like her husband, is not like her step-kids, she is just as bad as every one of them. And all those times where I have said I have a little sympathy for Melania, I wish I could go and take all of that back, because I no longer believe that Melania is any kind of victim here. I think she is been both complacent and complicit with everything that her husband has done.