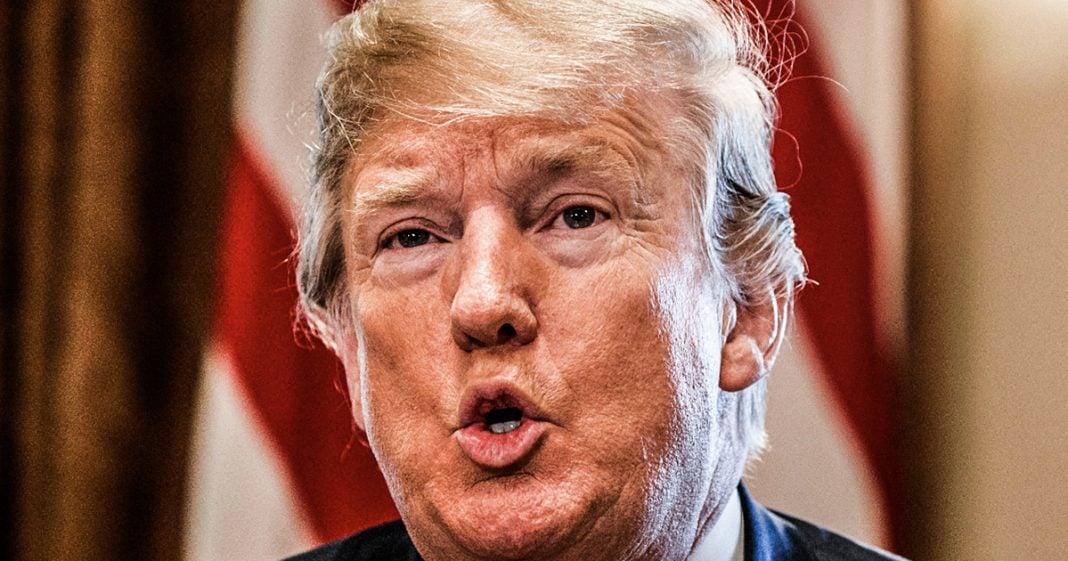 President Trump has signed an order that he claims will end his administration’s policies of separating families at the border. In reality, the order still allows for family separations, it will do NOTHING to reunite children who have already been taken from their families, and it still won’t allow legal asylum seekers to get into the country. Ring of Fire’s Farron Cousins discusses the order and why it won’t solve the humanitarian crisis that Trump created.

So on Wednesday, Donald Trump decides to sign an executive order to put an end to his administration’s practice of separating children from their parents at the border here in the United States. Some people praised this decision, said, “Yes, he’s finally doing the right thing,” but others looked at it for what it is: a very tiny and ineffective band-aid for a horrible policy that the president himself created. So let’s go through the list here. Let’s talk about what this executive order really does, and then we can decide whether or not Trump deserves any credit whatsoever for it.

First and foremost, children are still going to be put in cages, okay? That hasn’t changed, except the only difference now is that they’ll probably be put into those cages with their parents. I guess that’s better, but again, we’re still putting human beings in cages. We have government contractors, defense contractors that have already signed on to four-year, multimillion-dollar contracts to build more of these detention facilities and to staff them. So this policy’s not going away; we’re not going to stop putting human beings in cages.

Second problem: The current federal law only allows a child to be detained by Immigration for 20 days. So, if they’re locked in a cage with their family and they hit that 20-day mark, the kid has to go, but go where? So we’re still going to be separating children from their parents; they’re just going to get a few extra days to say goodbye.

And the third, and probably the most disgusting part of all of this is that there is no intention by this administration whatsoever to reunite the kids that have already been separated from their parents. They have no plan to do that. And worst off, according to an immigration court judge, these kids and their parents don’t know where one another is because the government didn’t tell them, and — gets worse still — the government has already lost track of them, some of them, hundreds of them, actually. Hundreds in the last few weeks, of children separated from their parents, and the government can’t match them up because they lost track of who is who and where is where.

So no, Trump doesn’t deserve any credit for allegedly fixing a problem that he created, that’s not actually fixed at all. We still have a massive humanitarian crisis. We’re going to see more of this happening throughout the next few weeks, months, years, whatever it’s going to be, and suddenly, we’re supposed to believe that it’s fixed because Donald Trump, who’d been lying about it from day one, finally did what everybody’d been begging him to, even though he said he wasn’t able to do that, though he finally did.

Kirstjen Nielsen at Department of Homeland Security actually said this past weekend they didn’t even have a policy that said they would be separating families from their children. And then yesterday, we find out, oh, she’s drafting a rule to change that order. This administration has lied to us every step of the way on this issue, every step of the way. There is not a single thing about this that they have not lied to us about. So if you believe that they’re actually going to be working on this problem and reuniting these kids with their families, then you are lying to yourself at this point. They have never been honest, they never will be honest, and they have no intention whatsoever of protecting these children and their parents.

Oh, and of course, we can’t forget the fact that they’re still not going to let legal asylum seekers come into this country. They’re still going to get locked up in cages too, even though they did do it legally, did everything by the book, but we’re still going to lock them up. At least this time, they’ll be locked up with their kids, instead of having the government ship them off to some other state and then lose track of them completely.