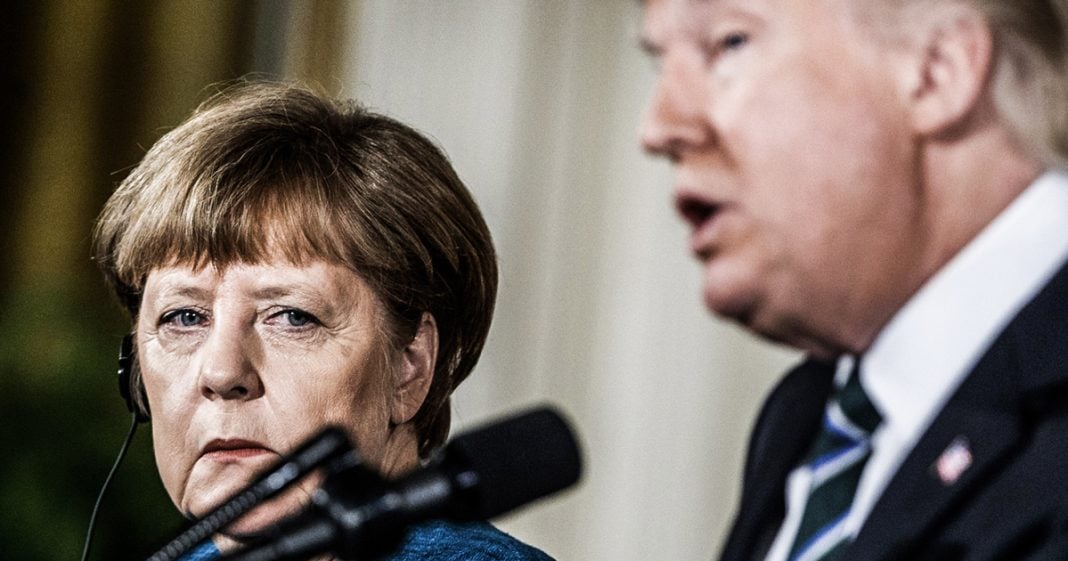 According to new reports, Donald Trump threw candy to German Chancellor Angela Merkel during the recent G-7 Summit, and proceeded to tell her “don’t say I never gave you anything.” What kind of behavior is this from a world leader? We wouldn’t accept this behavior from our children so why should we accept it from the President? Ring of Fire’s Farron Cousins discusses this.

The G7 Summit that Donald Trump recently attended in Canada may be ancient history at this point, but we’re still getting reports about how erratic and childish his behavior was at that summit. Now, I’m sure by this point, we’ve all seen the picture of German Chancellor, Angela Merkel, standing over the table with Donald Trump sitting there, arms crossed, and this pouty look on his face. Well, it turns out that there’s actually a little bit more to that story to the picture.

Shortly after that, Donald Trump finally agreed that he was gonna sign on to a joint communiqué of all the people there, saying they were gonna agree to a certain set of rules or whatever it was. It was a very informal type thing they wanted him to sign. After he agreed to sign it, according to those present at the meeting, which included six other world leaders, our allies, Donald Trump allegedly reached into his pocket, pulled out two Starburst candies, tossed them on the table towards Angela Merkel and said, “Don’t say I never gave yeah anything.” and then walked away.

There are so many questions that pop into my head about this story. First of all, does Donald Trump always carry a pocketful of Starburst? Because that’s a little odd for a 72 year old man to be walking around with something that you would expect your children to have. But, that is exactly what Trump is and that is what this story proves. I would never accept the behavior from one of my children tossing candies to another one of my children saying, “Don’t say I never gave you anything.” They would probably be put in a time out for a few minutes. They would get a stern lecture about how to treat other human beings, especially their siblings.

And yet, here we have Donald Trump, not in private, but at a meeting with other world leaders, acting like a five year old. And my apologies if I offend any five year olds out here watching by saying that, but that is basically what Donald Trump was doing there.

He is embarrassing the United States on an international scale at this point and the worse part is his supporters seem to think that, not only is it OK, but that it is needed. They think because he’s lied to them so much about it, that somehow these other countries are taking advantage of us. That they’re just being mean to us. And we need a standup guy like Donald Trump to walk in to those meetings and start throwing candy at people.

If Obama had done that, and I hate to do the what aboutisms, but seriously, if Obama had done that, Republicans would have been called for him to be thrown in Gitmo for the rest of his life. And yet, here they are actively embracing a man who has the maturity level of an elementary schooler and they think it’s perfectly fine to alienate, to mock and to insult the closest allies that we have here in the United States.