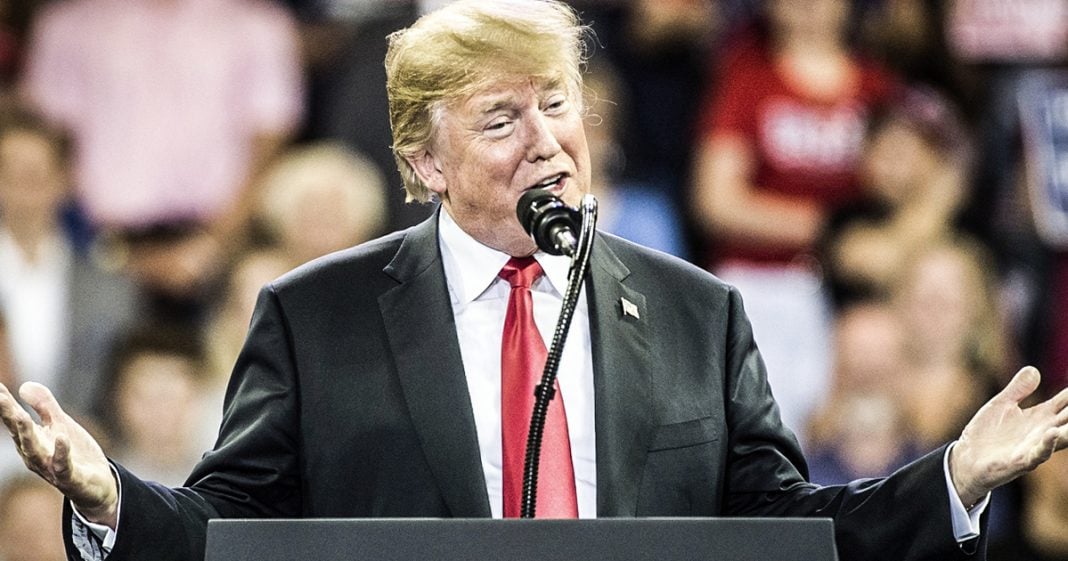 Donald Trump held a campaign rally in Duluth, Minnesota this week where he proved that there are still too many people in this country that are too stupid to realize that they are being brainwashed by a psychopath. During his speech, he removed a protestor after mocking him for allegedly living with his mother, and later on he proceeded to brag about how “elite” he actually is. Ring of Fire’s Farron Cousins discusses this.

On Wednesday evening, Donald Trump headed to Duluth, Minnesota, where he gave a campaign rally that really kind of highlighted everything wrong with this country, and with the president himself. He started off, before he even actually started the rally, before he even made it inside, talking about how many people were waiting outside. He was tweeting that out, showing pictures, all these people. Thousands of them, just thousands, which he also mentioned again when he was giving the speech.

At one point, a protester started yelling out, and that was at the same time that the crowd was going crazy with their build the wall chant, and rather than act like a civilized grownup mature adult human being, Donald Trump responded to the protestor this way.

Donald Trump: So, we’ve already started the wall, we got 1.6 billion. The wall has been started. San Diego and lots of different places, and we go, but boy it’s tough. They want to do anything they can to obstruct, and to make sure it doesn’t happen, but it’s happening. It’s happening.

Now, I wish that was the worst thing that happened in that rally, just Donald Trump being Donald Trump to someone. But, no, if you get the time, I suggest you got through, and watch the entire hour long rally, because it’s going to remind you of those old black and white films we used to see about Adolf Hitler’s rise to power. The parallels are unbelievable.

Later on in the speech, after insulting this protestor, who Donald Trump knows nothing about, has no idea if the guy lives with his mom, but he wanted to insult him in front of a couple a thousand people, so good job. That’s exactly what we want in a president, right?

But anyway, later on, Donald Trump took a swipe at democrats who republicans always call elite, which Donald Trump doesn’t like that term being used for democrats. Here’s what he had to say.

So, Trump has a better apartment. He’s smarter than these so called elite democrats, and he’s the president, and you’re not. Folks, you ever hit a point where you’re just like, I don’t even know how to properly convey all of the thoughts I have about everything that is wrong with this man, because that’s the point I’m at right now.

I feel like there’s almost nothing else I could say to just show how crazy this man is. So, let’s not talk about him. Let’s talk about that crowd, because that’s the scarier part. We know Donald Trump is insane. I mean, all rational people in this country assume there is something wrong with that man’s brain. But the people in that room, other than that protestor that was removed, those aren’t rational thinking human beings. Those are cult members, because that is what the republican party has become.

Trump’s behavior, yeah, we get it. You’re a psychopath, you’re a narcissist. But the people in that room, those are the people that we need to be worried about.