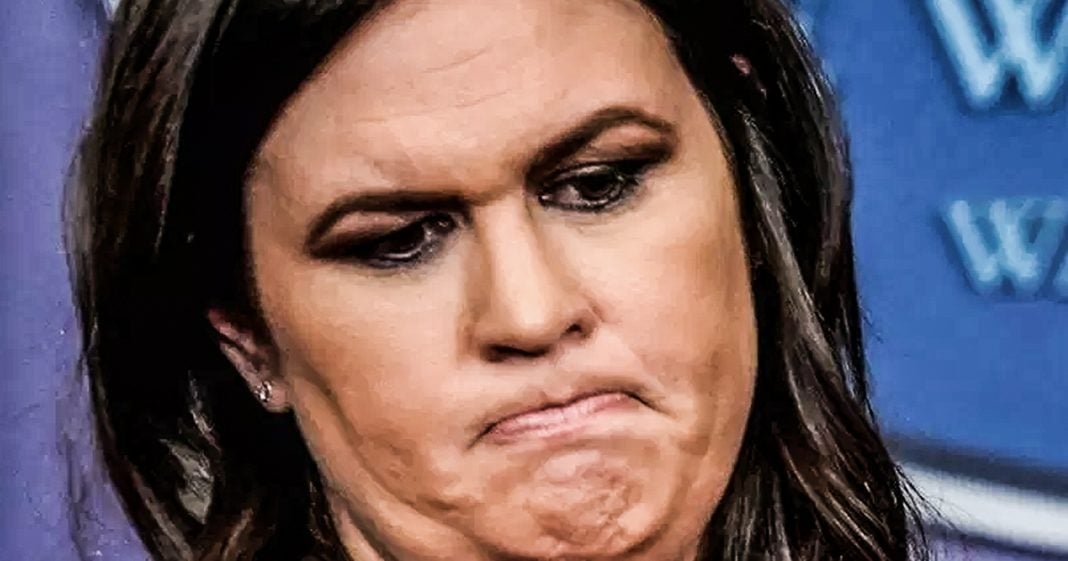 Reports say that Sarah Huckabee Sanders’ refusal to talk to the press for most of this week boils down to one reason: She’s sick and tired of defending Trump and his policies that she doesn’t support. Is this a sign that Huckabee Sanders is soon to be leaving the White House? Ring of Fire’s Farron Cousins discusses this.

It’s been a bit of an interesting week at the actual White House according to reporters. See, Sarah Huckabee Sanders has been reluctant to speak to the press at all this week because, according to those present, sources inside the White House, she’s tired of defending policies from the president that she does not support. Now, specifically in this instance from this past week, it was the child separation policy that the president repeatedly lied about, said the Democrats created it even though it was him and Jeff Sessions.

Sarah Huckabee Sanders has had enough. I mean, she got really hounded by the press last week for not standing up for it, for not doing anything to protect these kids, and in the same week, the one kid who asked her why she wasn’t doing anything about the issue of mass shootings. The children were actually starting to get to Sarah Huckabee Sanders to the point where she may have looked inside herself and realized this isn’t what I wanted to be doing as a human being. This is not the career I wanted. I do not want to go out there and support a president who not only doesn’t care about children, but he actually seems openly hostile towards them, and that is why Sarah Huckabee Sanders has been ducking the press all week. She was tired of it. She couldn’t do it anymore. To be honest, this shows us that there are cracks in the façade.

A couple of weeks ago, whenever it was that the CBS report came out saying Huckabee Sanders is going to be quitting by the end of the year, she denied it. Immediately said, “No, no, no. Absolutely not. Do you know something I don’t? Because I’ve never said that.” The next day she said that she was praying for clarity on the issue. Now, just a few days later, she’s tired of defending the president so she doesn’t want to do her job anymore. Sarah Huckabee Sanders will not be the White House press secretary by the end of this year. That is obvious. At this point, it’s going to be amazing if she even makes it to the end of summer. But to her credit, at least maybe, maybe she’s starting to develop a little bit of a conscience and it’s all because she finally realizes that she can’t just go around being a jackass to children like her boss does.

In spite of all the other horrible policies he’s enacted that she’s defended and lied about, maybe when it comes to the kids, Sarah Huckabee Sanders has the tiniest little bit of a heart.