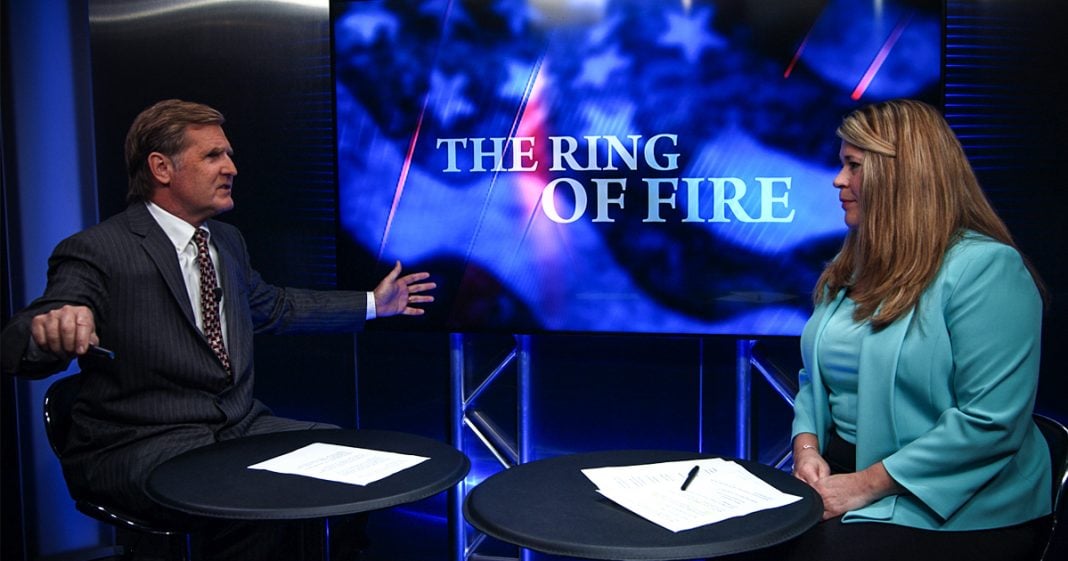 The #MeToo Movement has allowed victims of sexual assault to finally come forward and tell their stories. The high profile prosecutions and arrests of powerful men like Harvey Weinstein, Bill Cosby, and countless others have given these victims hope that, no matter how powerful the person carrying out the assault may be, they will be held to the same standard of justice as the rest of us. Ring of Fire’s Mike Papantonio and attorney Kim Adams discuss this.

Mike Papantonio: The “Me Too” movement has allowed victims of sexual assault to finally come forward and tell their stories. The high profile prosecutions and arrests of powerful men like Harvey Weinstein, Bill Cosby, and countless others has given these victims hope that no matter how powerful the person carrying out the assault might be, they’re going to be held to the same standard of justice as the rest of us.

But the criminal convictions are only half of the story and we’ve got Kim Adams with me now to tell the rest of the story.

Kim, let’s talk about one of the newest cases that we hear out there is the USC case. Oddly enough, it really hasn’t gotten that much attention, and I’m wondering, has the media … the media is like the shiny thing.

Mike Papantonio: Corporate media is like, “Show me a shiny thing, and then we gotta move on because we don’t have enough damn sense to analyze really what’s happening here.”

Mike Papantonio: So is this another shiny thing, or … you know, this is an important case.

Kim Adams: It is a very important case. I think it may be a shiny thing. I cannot understand how the media cannot respond to the outrage of these students and just the institution in and of itself and how much information has been hidden for so long. So it’s very difficult to understand why the media has sort of downplayed this case.

Mike Papantonio: Okay. You’re investigating it, you’re working on it, this is certainly as bad as anything I’ve heard.

Mike Papantonio: Tell me a little bit about that.

Kim Adams: So, Dr. George Tyndall has been with the school for a number of years. The reports of this, whether it was sexual assault, sexual harassment, or unethical practices, started in the ’90s and had continued up until he was discharged, probably in 2017 he was suspended. So we have looked at probably … I think there’s been eight complaints filed. The school has 52 complaints, another 400 … the calls are just flooding in of this doctor’s practices and they are really outrageous. Taking off his gloves during an examination. Reports of him preying on Asian students hoping that they wouldn’t understand the difference of the practice here in America versus what they had.

Mike Papantonio: Okay, what … okay, so he’s examining these women. He’s doing things like examination, as you point out, without gloves-

Mike Papantonio: … trying to say he can’t wear the gloves as he’s doing a vaginal investigation because he can’t feel things just right.

Mike Papantonio: And so, this case is the same we see all the time. It takes somebody coming forward and saying, “Dr. George Tyndall is a freak.”

Mike Papantonio: “He is a freak and he needs to … we need to do something about it.” It’s unbelievable … you will never convince me that this school didn’t know about Dr. George Tyndall long before this hit.

Kim Adams: They … clearly they knew. There are reports of them sending out surveys to students. Do you like Dr. Tyndall or do you not like Dr. Tyndall, and that was the extent of their investigation. I’m sure the litigation will reveal more things that we have not seen yet. He would take … but clearly taking pictures of student’s genitals while you’re in the examination room is unethical. Clearly him asking them, “Get completely undressed” without having any robe … most doctors step out of the room. There’s just a number of things that I think did raise concern for some of these nurses, but the school didn’t act on it.

Kim Adams: They shoved it under the table, and then these students continued to be exposed to this type of conduct.

Mike Papantonio: Yeah, what happens, and we’ve seen this time and time again, is the people especially … Penn State’s a great example. Take Penn State. At Penn State, the people knew that should have known, knew what was going on.

Mike Papantonio: I’ve been involved in cases where the university … this is very insidious. The university sets up a go-between, kind of ombudsman kind of organization, to handle the assault complaint. Now, why are they doing that? Because the kids come in there, they have to sign a release “I’m not going to talk about it, what I do is going to be kept quiet.” It is to totally self-serving. They’re doing it up at Yale, for example. Yale has … they have this nimrod organization, where they bring the people in there, these girls that have been assaulted and they say, “Well, you know what? We’re going to work it out, Mary. Sign this to where you can’t talk about it and we’re going to work it out.” You see this, don’t you?

Kim Adams: Oh, we do see it. Or “You misunderstood what happened in the examination room”, or “Everyone else really loves this doctor.” But you’re right. That’s exactly why they have created this ombudsman, which it was initially supposed to be that people would have a safe place to go and report these things. They would feel comfortable that it was going to get proper investigation, but that’s not what’s happening. What’s happening is exactly what you mentioned.

Mike Papantonio: Okay, so think of how insidious that it, okay? Now Yale is doing it right now.

Mike Papantonio: They have this same kind of set up, where somebody’s assaulted, the girl … woman comes in there, they try to talk her out of going forward.

Mike Papantonio: They try to talk … “Let’s keep it quiet. Let’s sing Kum Ba Yah. Yeah, we’re going to punish the guy, but we gotta keep it quiet.” The truth is, it’s all about cash.

Kim Adams: It is.

Mike Papantonio: … trying to protect themselves, and that is the ugliest part of this story-

Kim Adams: It is.

Mike Papantonio: … is these go-between organizations and the woman says, “Well, I … you know, I went and I reported it and they told me I couldn’t talk about it.” How ugly is that?

Kim Adams: Right. “Told me I couldn’t talk about it and not to worry about it, and we would take care of him.” It is ugly, and it’s … what’s even worse is you’ve got the head Dean understanding what’s going on and essentially approving it, which is why he has resigned his position. You’ve got USC, specifically, who had two other doctors that had been involved in similar instances, not to this degree clearly, but … so they clearly know what needs to happen. They clearly know the training. They know that they have a problem in their school, but they can’t mess up enrollment. That would kind of reduce that.

Mike Papantonio: Alright. Well, look. The truth is, you’re on the case. Don’t give them any breaks, I know you won’t. And I think … I got a prediction of what you’re going to find. You’re going to find some bureaucratic, you know, administrative type who has been working … beyond just the dean, who’s been working diligently, not to protect students, but to protect their job and protect the cash there at USC. And the only way they’re going to get the message is to take that cash away and say, “You messed up. Don’t do it again. This is an example.” I’m … you know, and as we go forward, Kim, good luck with the case.