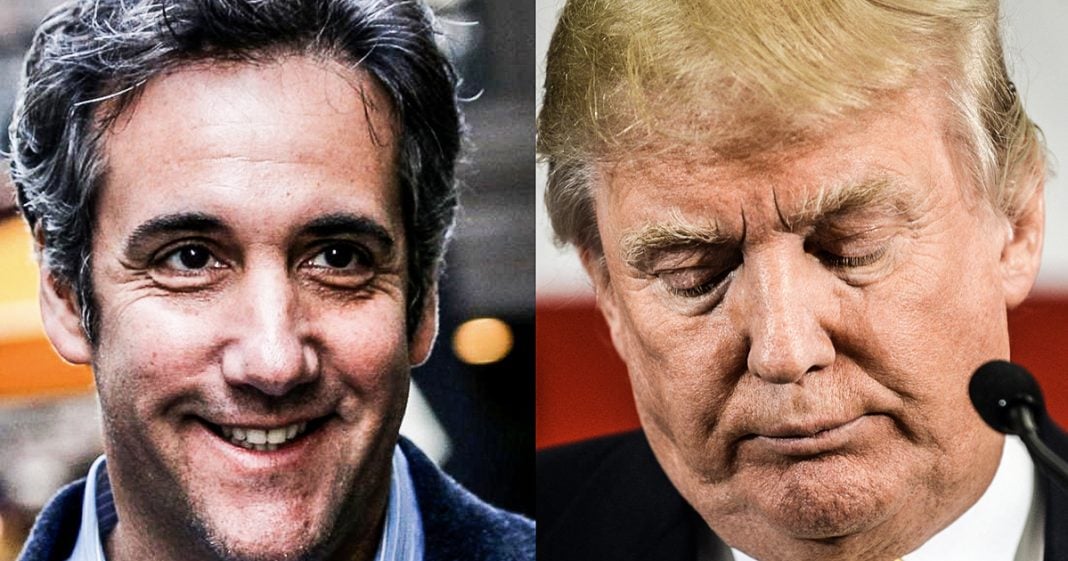 According to a close friend of Michael Cohen, Trump’s former lawyer is fed up with the fact that President won’t defend him or pay his legal bills, so Cohen is prepared to cooperate with Robert Mueller and give him everything that he has on Donald Trump. This could be the beginning of the end of the Trump administration, depending on what Michael Cohen has to offer. Ring of Fire’s Farron Cousins discusses this.

A close friend of Michael Cohen, Donald Trump’s former attorney, has told CNN that Michael Cohen is ready to cooperate with Robert Mueller and turn over the information that he has about Donald Trump and Donald Trump’s businesses. Now Cohen has not yet made the decision and said, “Yes, I am 100% going to do that,” but his friend and ally says that he is at the point where that will likely be his next move.

There are several reasons for this. The first, according to the report from CNN, is because Cohen feels isolated. He is mad that Donald Trump has not come out to publicly defend him as he has so many others that have been embroiled in these investigations. And two, because he’s not offering to pay Michael Cohen’s legal bills that are actually destroying him financially. Now if Donald Trump did agree to pay those, that would obviously be a massive conflict of interest. You could even argue that that would be considered witness tampering by the prosecution, so Trump probably has good reason for not coming out and doing that.

But there is a third reason why Michael Cohen is likely to flip on Donald Trump now, and that is because he has no more options. At this point, given the information that these prosecutors and investigators have, the only chance Michael Cohen has to not spend the rest of his life in prison is to start turning over evidence, work with the state and with federal prosecutors in order to turn in other people to get a reduced sentence.

Now I don’t think it’s possible whatsoever for Cohen to avoid jail time completely, but if he decides to work with them and hands over everything he has on Trump, assuming it’s something that’s relevant to these investigations and not just records that show no wrongdoing, then Cohen is pretty much screwed at this point. But most of us obviously don’t think that that’s the case.

If Trump has committed any kind of wrongdoing, whether during the campaign, or even just while he was in New York as a regular businessman before he entered politics, Michael Cohen is the guy who is going to know about that. He helped with Trump’s finances. He was a mainstay at Trump Tower. He was in there with those deals. He knows what kind of shady things did or did not happen.

Michael Cohen knows everything, good or bad, and if he is willing to flip on Donald Trump, then that’s probably going to be very bad for Donald Trump, and maybe that helps explain some of his more erratic behavior in the last week or so. After all, he has been outspoken about everybody in the Mueller investigation, and yet has remained almost completely silent about the Michael Cohen investigation, and it’s because he knows there’s something there.

He knows that he doesn’t want to get involved with that because he may say something that makes worse for Cohen, and then Cohen at that point could flip and make things worse for Trump. When Trump is silent about an issue, that’s pretty much as bad as it gets. So his silence on Cohen, this silence that has left Cohen feeling isolated according to his friend, is ultimately going to end up being his undoing, assuming Cohen has something that Robert Mueller would actually be interested in.