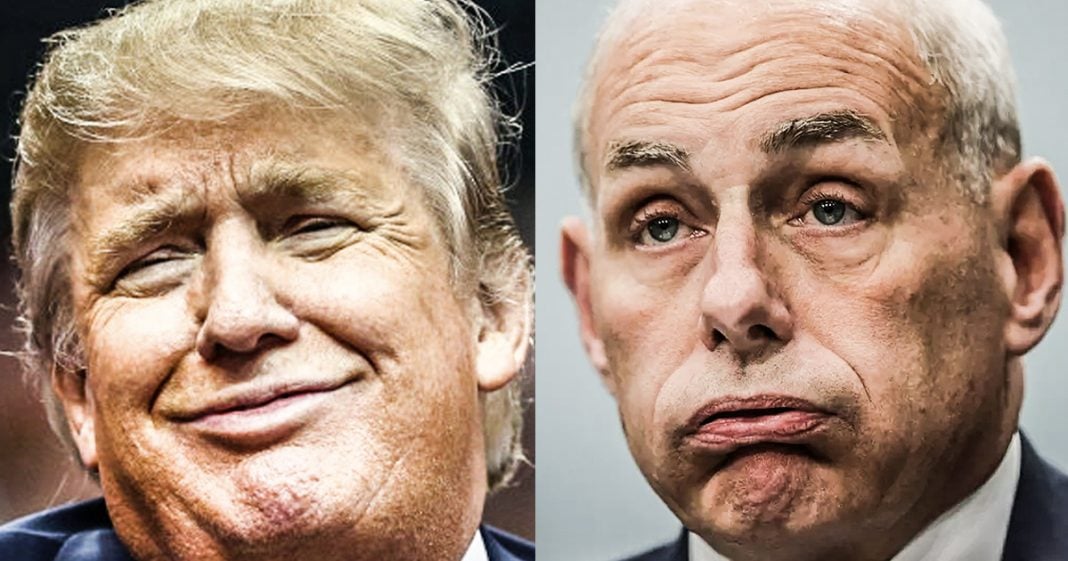 According to a new report from Politico, people inside the White House are saying that Trump and his chief of staff John Kelly are barely tolerating one another, and that Kelly has decided to just let Trump do whatever the hell he wants to do, even if it leads to his impeachment. This makes sense, considering how unhinged Trump has been in the last few weeks, as Ring of Fire’s Farron Cousins explains.

Donald Trump’s of Chief of Staff, John Kelly no longer cares what the President does, or at least that’s what several sources inside the White house told Politico recently. According to these sources, both Donald Trump and John Kelly barely tolerate one another at this point. They try to interact as little as possible and John Kelly has conceded that he is never going to be able to change the President’s behavior or the words that he says, or even some of his most horrendous policies.

So, John Kelly according to these aides has basically just said “Screw it.” He doesn’t care what happens to the President and according to these people inside the White House, he doesn’t even care anymore if Trump gets himself impeached. Now that’s a pretty big statement to make, and I am hoping that these sources inside the White House talking to Politico, I’m hoping that they’ve actually heard John Kelly say that, because that is exactly what Donald Trump is doing at this point.

Every time he goes out there and talks to the press, talks to a business group, gives any kind of speech, he is giving information about one, how unstable he is mentally and two, about how terrified he is of these investigations. We know that there was no bias in the decision to launch the investigation into Donald Trump. The IG report last week explicitly said that. I know Republicans are still saying that “Comey should be locked up, and Hillary should be locked up and that there was bias,” but those idiots haven’t read the actual report that says, “Nope, no bias in the investigation.”

So, John Kelly has decided at this point, I can’t handle this, I can’t reign this mad-man in. I’m just gonna let him go out there and sink his own ship by repeating these lies about the investigation, by enacting these horrible policies, and by basically acting like a crazy person anytime the cameras are rolling.

So, good for you John Kelly, I’m actually more proud of you for staying in this position with a screw-it attitude, then I would be if you’d quit. Because if you quit, Donald Trump might get somebody in there to be his Chief of Staff that might actually try to stop him again, that might reign him back, but not you. You’ve decided that you’re gonna sit there and have a front row seat for this Donald Trump sinking ship, and for that I admire you.