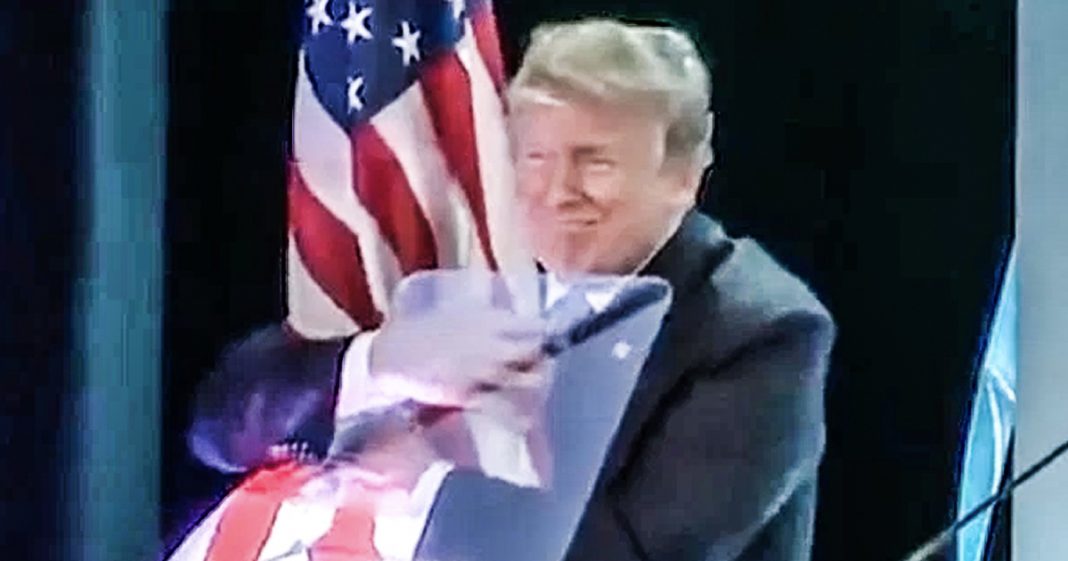 Following a speech to business groups where he discussed illegal immigration into the United States, Donald Trump slowly sauntered over to a nearby flag and proceeded to hug it awkwardly while the crowd cheered. While this isn’t the first time the President has physically wrapped himself in the flag, it shows just how easily manipulated his followers can be. Ring of Fire’s Farron Cousins discusses this.

On Tuesday, Donald Trump gave a speech to the National Federation of Independent Businesses, and he ended the speech in a way that he’s actually done a few times in the past, by basically walking up and hugging the American flag. Take a look at what happened at the end of his little speech here. (singing) Okay, here’s the thing. That’s not something a normal human being does. Honestly, think about it. When was the last time you ever saw somebody that had their full mental faculties about them walk up and hug an American flag? I can guarantee you you’ve never seen it. Why? Because that’s something that a crazy person does, but Trump wasn’t just doing it because he’s crazy. No. He’s doing it because his followers are crazy and stupid.

You know, I am tired of being nice. I am tired of trying to dance around using these words, but that is exactly what they are. They’re either crazy, stupid, or racist. Those are Trump followers, and they love to see him walk up there and hug that flag, because it proves to these morons that he just loves this country so much. Look at him embracing the flag. If you fall for that, you’re an idiot. If you think that Donald Trump gives a damn about anything in the United States, you’re an idiot. I think it’s time that we just start calling people that. Call it what it is. Stop being nice. Stop dancing around the harsh language. They’re literally going around and stripping infants from people and shoving them in cages, and we’re supposed to be nice? We’re not supposed to call them crazy when they hug the American flag, or when they applaud a man hugging the American flag? No.

Things in this country have changed a little bit, and it’s okay to be mad. It’s okay to call them out on it. It’s okay to get in their face if you have to, just don’t do anything violent or illegal, but Trump is manipulating these low-information people who still support him. That’s what that flag hugging incident is all about. They love that. They think this man actually loves this country. They think this man actually gives a damn what happens to them in their lives. Nothing could be further from the truth. He understands how to manipulate people. That’s the only intelligence that Donald Trump has, is making people think that he actually cares. Yeah, guess what? That is 100% the trait of a psychopath, not a sociopath, a psychopath, and that is exactly what Donald Trump is. We can’t be afraid to call him that because we think we should be using nice language right now. Those days are gone. Call it what it is. Donald Trump is exhibiting psychopathic behavior, and his base is too stupid to even realize that.