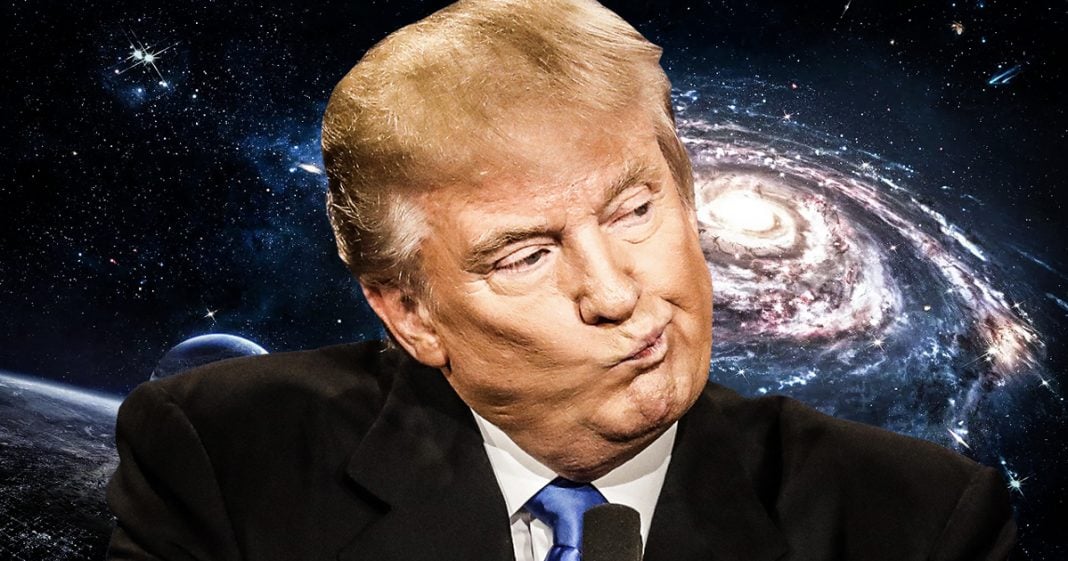 Donald Trump this week said that he was directing the Pentagon to create a 6th branch of the military that will be a “space force,” carrying out strategic missions in outer space in the name of the US military. Not only is this idea another vanity project for Trump, but it is also going to cost more money than the United States has ever seen. Ring of Fire’s Farron Cousins explains what we COULD be doing with that money if Trump wasn’t such a horrible president.

A few months ago everybody had a good laugh when Donald Trump said he wanted to create a space military. You know the big questions were who’s going to pay for this? Why do we need it? What are they going to do? And then the issue kind of died off, but on Monday of this week Donald Trump made it clear that we are absolutely 100% going to have a space military operated out of the United States. Trump says that he has directed the Pentagon to create this so called space force and that it will be the 6th branch of the United States military. It’ll kind of work in conjunction with the Air Force, but as Donald Trump said “It’s going to be separate but equal.” I don’t think it’s an accident that he used that term either. I think it’s been something that’s kicking around in his head for several months, and he finally got the opportunity to use it.

But that aside, here’s the thing. A space military will obviously require some kind of space travel, right? I mean you’ve got to have outer space vessels, rocket ships, whatever you want to call them, spaceships. Otherwise, it’s just the Air Force flying really, really high. So, we’re looking at billions, possibly even trillions of dollars just to create this let alone keep it running. I’m sure private defense contractors, Elon Musk, everybody’s probably salivating right now thinking about how sweet those government contracts are going to be to create this outer space military. But, here’s the thing. We have been told repeatedly by the Republicans running this country that we cannot as a country afford universal health care. We can’t afford debt-free college. We can’t afford to give teachers raises, or fix our infrastructure, or fund after-school programs, or fund the food stamp programs, or fund Medicaid and Medicare and Social Security, and everything else. It’s too expensive.

You liberals are out there promising stuff that we can’t ever afford, but fuck yeah we’re going to create a space military because screw it, we want it. This is a vanity project for Donald Trump, okay. He wants this to be his legacy. He knows we can’t afford it, but he wants it done because he wants his name on those rocket ships going up there being the Trump Space Force. That’s what this is about. If we’re going to spend another dime as a country it needs to be on something that actually benefits the people here in the United States. A Medicare for all. A single-payer system. A debt-free college. Something, anything for the average citizens in this country who have been told time and time again that taking care of their basic needs was just too darn expensive for Republicans.