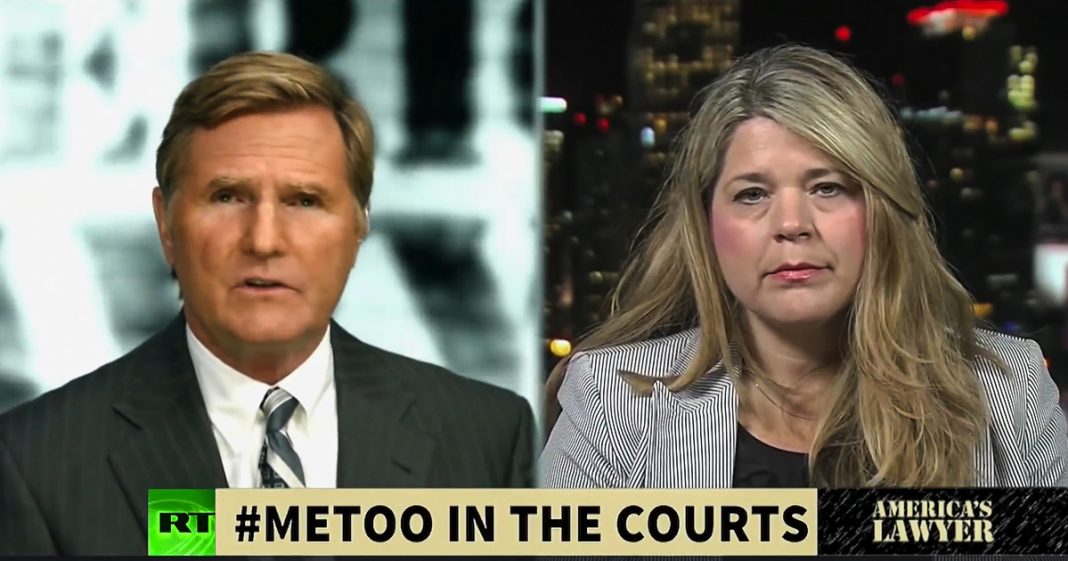 With the surging #METOO movement, perpetrators of sexual abuse are finally being held accountable for their actions. Now organizations are finding out that turning a blind eye to this kind of criminal behavior comes with a very hefty price tag.

To learn more about the case against Dr. Tyndall and USC, visit USC Sexual Abuse Lawsuit, a comprehensive webpage maintained by Levin Papantonio.

Mike Papantonio: Over the past 20 years, victims of sexual assault and harassment have finally begun seeing their perpetrators face justice in the form of criminal prosecution, and large jury verdicts and settlements. With the surging #MeToo movement just last year, more than 200 powerful people, celebrities, politicians, CEOs and even college administrators have been the subject of sexual harassment or assault allegations, and finally they’re being held accountable for their actions.

But while most of the media attention has been focused on the criminal aspect of sexual assault, there are plenty of civil lawsuits against organizations and institutions that helped to cover up years of abuse. Because we have to remember that it wasn’t just the people committing the assault, but also the organizations that helped cover it up and prevent victims from coming forward to tell their stories.

One of the more highly publicized cases was the story of Larry Nassar, the former medical trainer at Michigan State University, who also worked with USA Gymnastics training Olympians. Nassar is currently serving out the beginning of his 300 year sentence after abusing young women for more than a decade. The institutions that employed Nassar have reached a $500 million settlement with his victims, because they simply chose to ignore the complaints against him.

The list is endless, with the Penn State, the Catholic church and the University of Southern California being just a few of the organizations that either covered up abuse or just chose to ignore it. But as more women and men come forward to expose their abusers, these organizations are finding out that turning a blind eye to this kind of criminal behavior comes with a very hefty price tag.

Joining me to talk about sexual assault litigation is attorney Kim Adams. Kim, most people probably understand the criminal aspect of what’s happening, but they don’t understand the civil litigation side. In general, tell us how these sexual harassment assault lawsuits are being filed, and where do they go after the filing?

Kim Adams: You know, you’re right. Most people understand criminal aspect, criminal conduct equals getting your liberties taken away. On the civil side, which often happens with sexual assault or sexual harassment cases, the victim is permitted to file an assault claim, which some might refer to as the swing, a battery claim, which others will refer to as the actual hit, and then intentional infliction of emotional distress for just outrageous conduct causing emotional distress.

So you’ve got a claim against that actual perpetrator. The problem is sometimes there’s not any money there, right? Insurance policies aren’t going to cover intentional acts. There are other often culprits involved, which you kind of alluded to. Institutions, schools, businesses, and so there’s another arm of that claim. Those allegations normally are negligent hiring or supervision, where schools and/or other businesses and entities knew of a person’s background and sort of put people in harm’s way. Also, you might look at failure to protect the people. They knew that things were happening on their campus, criminal activity, and they failed to put someone there to protect them.

Then the third aspect of ways that you enter the civil system with sexual harassment, would be against employers. There are allegations of quid pro quo. Let me ask you for sexual favors, so that you can keep your job or advance in your job. Also, maybe a hostile work environment, where there’s some kind of sexual demeaning or hostile environment that’s been put upon an employee. Those are ways that you can sort of enter into the civil system.

Mike Papantonio: Nobody’s really talking that much about the University of Southern California. It’s a very important case. Actually, full disclosure were somewhat involved with … Explain that case a little bit.

Kim Adams: Yeah, it’s hugely unfortunate, and it is a very important topic, because people are sending their children to these universities. This doctor was hired to do the gynecological exams for the entire university. He’s been there, and these allegations have been swirling for 15 plus years. The allegations are not just minimal allegations. Yeah, there were some allegations that he had made sort of inappropriate jokes. Okay, maybe that’s unethical, but is it criminal or actionable? But it does further than that. He’s taking his gloves off to perform these exams, he’s taking pictures of these college girls genitalia. He’s making sexually explicit comments about their bodies, all over the last 15 years. These allegations from the nurses that are actually in the room continue to go undocumented, uninvestigated.

So this man’s been able to allegedly perform these acts for a very, very long time. I think you’re going to hear a lot more as the evidence is uncovered on this Southern Cal case.

Mike Papantonio: When I listen to the facts, this is a case that actually developed late. What I mean by that, there was already all of this information out there about Penn State. There was this information out about what was going on with the Catholic church in very specific kinds of ways. There was a ton of information that should’ve said to the people at this university, “Get control of your own university”, because it’s happening right here, and it sounds like it was ignored. It’s very apparent to me that people there understood what was happening. What’s your take?

Kim Adams: Their initial comment and reaction was, “Wasn’t our job to report this criminal conduct. It wasn’t our job to sort of move forward with that. I think that’s clearly just idiocy of not understanding and not having the desire to actually protect the very students that are paying to go there. So I think you’re absolutely right. As this evidence is uncovered, we’re going to see a lot of these actions, and I think Southern Cal’s got a lot of answering to do.

One of the questions that may come up with the #MeToo movement is why the victim didn’t come out publicly sooner. Tell us why women are often afraid to come forward after they’ve been clearly assaulted.

Kim Adams: Right, you hear that a lot. I think there’s numerous psychological articles that are published on it. I think there’s a few things. First, when a woman is violated in that manner, that the shame starts to set in. People don’t really understand it, I don’t think, until you’ve lived it. I think that with that comes, they start to sort of blame themselves. Hey, I smile, I’m friendly, maybe I gave the wrong impression. So they start to shame themselves in that way.

They also start to minimize the efforts of their perpetrator. They say, “Well …”, and sometimes even feel sorry for them. “Well, maybe he had drank a little bit too much, or I should not have put myself in that position.” But I think when you touch on getting past that emotional and that psychological aspect, and you look at the fear, yes, the consequences women fear, losing credibility and losing their credibility by coming out.

They don’t want to be blackballed in their industry because they called out their buddies or their employers or their school’s doctor. They don’t want to be looked at as a troublemaker. “Oh goodness, here now we’re going to have trouble for our organization because you’re alleging these issues happened.” So I think women do tend to keep it close to the vest for a number of reasons. Fear is just one of those.

Mike Papantonio: Do you think the fall of powerful men like Weinstein and Cosby will encourage more women to come forward as part of the #MeToo movement, Kim?

Kim Adams: So, I think that maybe. What #MeToo has done is it’s sort of given a platform for women to understand where the lines are drawn. You mentioned Southern Cal. The doctor’s saying, “I’ve gotta take my glove off because I can’t feel this, that or the other. So they don’t know the differences, right? The nurses know the difference, but the students maybe not know.

So I think that you may see women come forward. You may also see just women start to feel a little more comfortable. The motto for #MeToo was empowerment by empathy. So both men and women now feel like, “Hey, okay this is sort of a safe place for me to go ahead and say, ‘I’ve been exposed to these things,'” And #MeToo has also catapulted that next movement, which is time’s up. We’re not going to tolerate this anymore. Now everyone needs to understand where are the guidelines, where are the boundaries, and this is where they are.

So I think #MeToo has given some positivity. I think there’s been a tad bit of backlash, because unfortunately when it came out on social media and these social media platforms, people were blurring very distinct lines between a clumsy come-on … I think I read one person describe it, and a rape. Those people were being treated the same. I think that we have to be very careful to keep those lines distinct, because they are not the same.

Kim Adams: So then you know they have an action. They have a recourse. I think first off, some steps is to make sure you document the event document the date, the time, people who may have witnessed it. I think if you get notes, memos, letters, text messages, phone calls, save the evidence. I think understand your workplace’s sexual harassment policy, and make sure that you follow those guidelines, report it. The law permits an employer a chance to correct the incident, correct the wrong. So you need to make sure that you report it. If you don’t report it, you’re not giving yourself much leg to stand on. You’re also not preventing this from happening in the future.

For workplace issues, you have to file complaints with the EEOC. Then maybe hire an attorney to make sure you’ve got an unbiased third party to evaluate the facts that you’re giving them.

Mike Papantonio: Kim, keep up with the Southern Cal case as it develops with you. Keep us in touch with what’s happening. I think it’s going to be a lot more interesting as this develops.