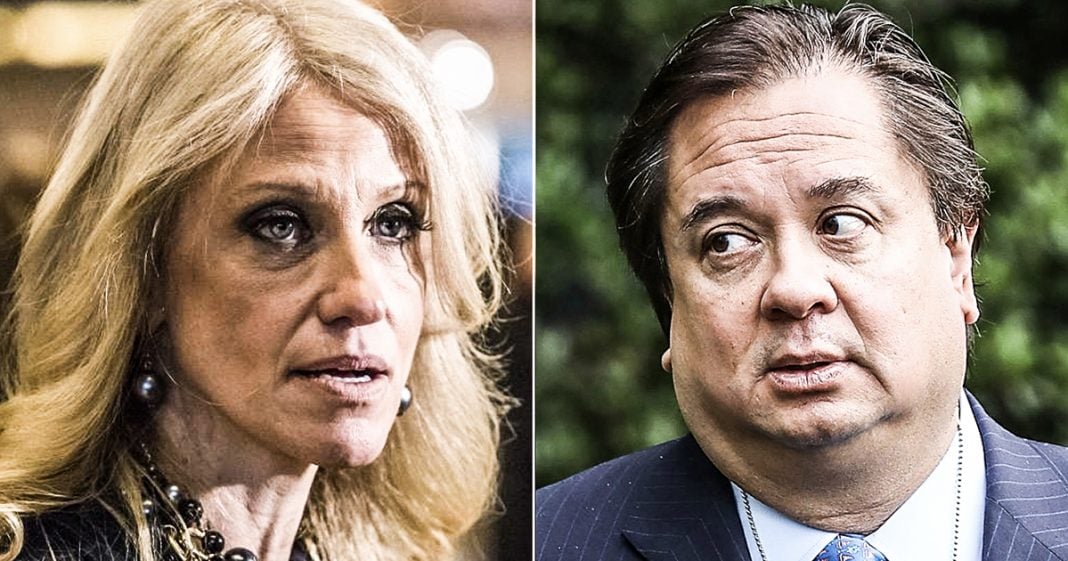 George Conway, the husband of White House counselor Kellyanne Conway, believes that a new criminal investigation of his wife’s boss should be launched to determine whether the President and his children broke the law with their charity. Conway makes a good argument, and there is certainly enough evidence to warrant an investigation. Ring of Fire’s Farron Cousins discusses this.

Looks like we’re in store for even more problems at the Conway household. George Conway, Kellyanne Conway’s husband, tweeted out, this week, that Donald Trump should be referred for criminal investigation to the state of New York. Here’s what happened.

George Conway was tweeting out about the story about Trump charities and the new charges coming from New York attorney general, Barbara Underwood. Conway, a lawyer himself, understands that these are very serious allegations. He said that this case should absolutely be referred for criminal investigation.

Now, this is not the first time in recent weeks that George Conway has come out and, basically, attacked his wife’s boss on Twitter. Right here, in this particular instance, George Conway has a very good point. This story about Trump charities being sued by the New York attorney general and being referred for possible criminal prosecution is one of the biggest stories in this country right now, and yet you cannot find coverage of it anywhere. Yes, obviously, we have a very massive problem with the detainment of children, in this country, but we also have a problem of a man who has likely committed crimes serving currently as president of the United States.

These are verifiable, okay. The New York attorney’s general office has emails. They’ve got all kinds of evidence to show that Donald Trump, himself, and his children, Ivanka, Trump Jr., and Eric, were all involved in a massive fraud scheme to rip off their own charity, use it as their personal piggy bank, which is the first illegal act. The second one is to use it in order to manipulate voters, which was using a charity for political purposes, which is also illegal.

This is a pretty cut and dry story here. The evidence tells it very well. There’s emails from Corey Lewandowski directing the charity to make a donation to a veterans’ fund the day that Donald Trump was going to speak to a veterans’ group so that he’d have something to boast about. You don’t get more politically involved with a charity than that.

Yeah, George Conway has a very good point. This just adds on to all of the other investigations going on with Donald Trump, himself. In my opinion, I think this charity one has the most potential. We know there’s going to be some things that come out of Robert Mueller investigation. We know there’s going to be some things that don’t come out that I think a lot of people are waiting for. They may not ever come to fruition. This one, in the state of New York, an area where Donald Trump could not pardon anyone if they were convicted of a crime, even if they’re his children of himself, this one has the very real potential to put Trump and possibly even his corrupt little children in prison for a very long time, or, at the least, remove the man from office.

To be honest, I think that’s what George Conway wants too. Yeah, he’s a conservative. He’s always been a hard core conservative. At least he’s one of those conservatives that happens to understand that Donald Trump is causing irreversible harm to the Republican Party. Conway want him gone, even if it means his wife loses her job.