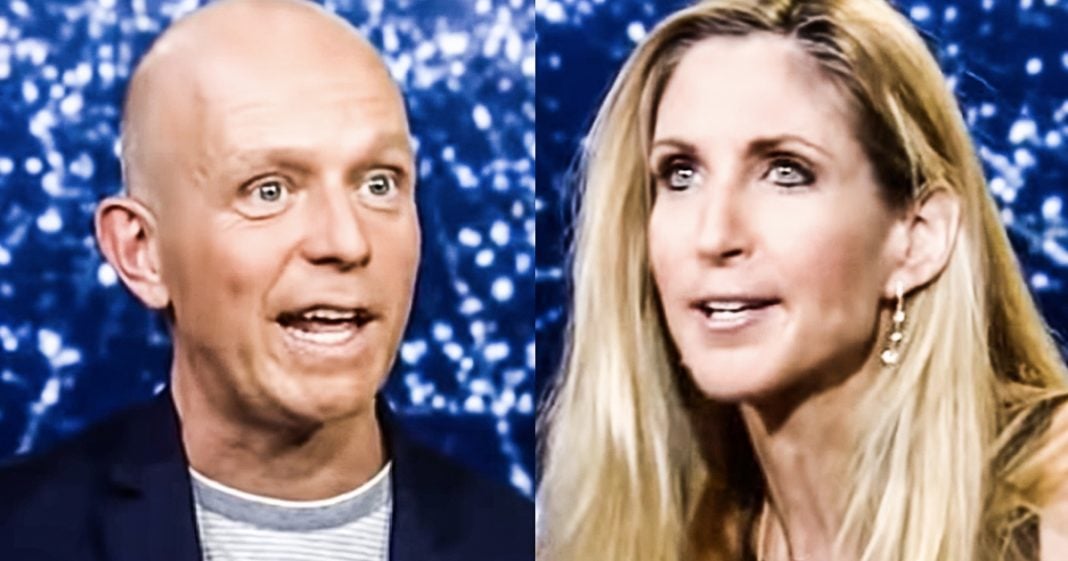 Ann Coulter is desperate to stay relevant, and with immigration being the biggest news in the country, that gives her a perfect opportunity to bring her unique blend of hate and stupidity back into our lives. During a recent appearance on Fox News, Coulter claimed that the children being into detention centers were actually “crisis actors” who were being coached by liberals and the media. Ring of Fire’s Farron Cousins discusses this.

Recently Ann Coulter, the right-wing queen of hate talkers, made her way back onto Fox News, where she was talking about immigration here in the United States, and the administration’s policy of stripping children from their parents and housing them in these detention facilities. And Coulter, true to form, managed to say one of the most outrageous and outlandish things there that was so crazy it actually shocked the host of that program. Take a look.

Ann Coulter: Their strategy, “Don’t let people think about immigration, don’t let them know any facts.” Anchor baby, there is nothing racial, there is nothing sexual, it means you anchor the child here, and then the child can bring in all the relatives. It’s a boating metaphor. So yeah, they’re upset about it because it allows people to discuss immigration.

Kimberly Guilfoyle: And then chain migration.

Ann Coulter: And chain migration. But look, back then Posner said, “As long as you incentivize people to come here from south of the border, they’re going to keep dying crossing through the desert.” As long as you keep that magnet on, and what greater magnet than citizenship, medicare, medicaid, free health care. That’s why people voted for a wall, and I’m would also say one other thing, these child actors weeping and crying on all the other networks 24/7 right now, do not fall for it, Mr President. I get very nervous about the President getting his news from TV because I also have an idea of America in New Yorker.

Ann Coulter: An New Yorker article, New Yorker is not a conservative publication. They described how these kids-

Steve Hilton: See, I told you we wouldn’t get a word in. Told you.

Ann Coulter: These kids are being coached, they’re given scripts to read by liberals, according to The New Yorker. Don’t fall for the actor children.

Okay, so several things to point out about that clip there. First of all, host Steve Hilton was just amazed that she even said that, and I love the part where he’s trying to say, “Yeah, I don’t think that that’s what happened.” Referring to that New Yorker article about these children being given scripts to read by liberals, which as far as we can tell, doesn’t even exist. But, none the less, Ann Coulter right now is doing what she does best, and she’s trying to dehumanize these children, dehumanize these immigrants coming into the United States. Why? Because it makes it easier for republicans to ignore the issue. It’s the same thing they do after there’s a shooting in this country. They come out, they say that these people are crisis actors, that they weren’t really involved, it’s all staged, so you can distance yourself and dehumanize the opposition, without ever having to actually feel anything close to empathy for the people in this country who are suffering.

That is what Ann Coulter does best, just like Alex Jones, except Coulter, unlike Jones, has been much more outspoken with her hatred of all non-white people here in this country. So obviously this immigration debate that’s happening right now, and the human rights violations that are happening are Coulter’s perfect opportunity to come back into the limelight and spread her very unique and disgusting brand of hate to anyone willing to listen.