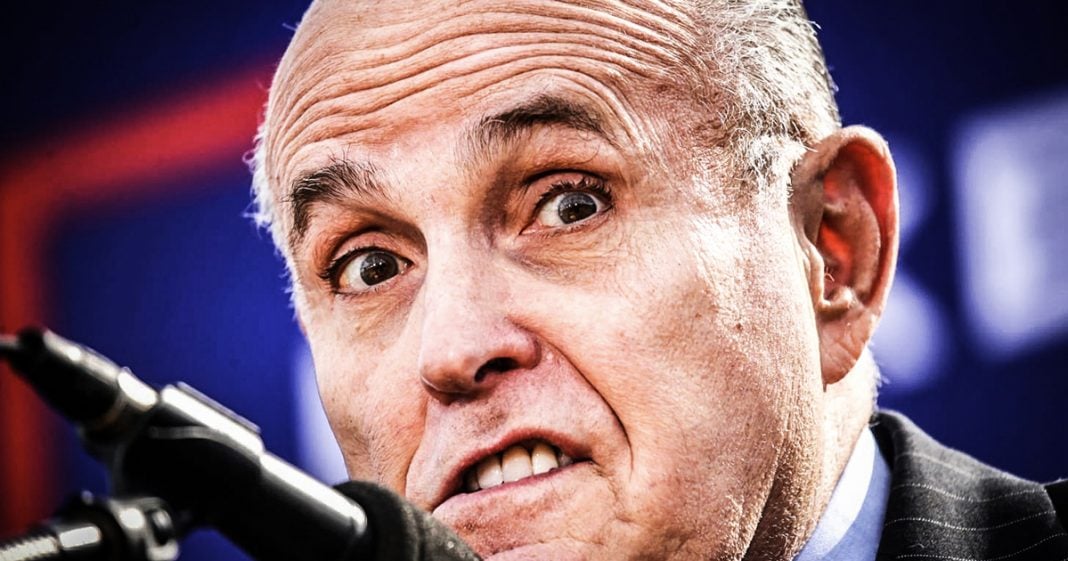 During a campaign stump for Republican Dan Donovan, Trump lawyer Rudy Giuliani went off script and started attacking the investigators looking into the conduct of the Trump campaign and said that these individuals are “wackadoodles” who belong in psychiatric wards. Giuliani appears to have lost what was left of his mind, and his gross incompetence is going to sink this administration for good. Ring of Fire’s Farron Cousins discusses this.

Over the weekend, Rudy Giuliani appeared at a campaign event for Republican Congressional candidate Dan Donovan up in New York. And during his little stump speech for Donovan, he kind of went off the rails a little bit, and decided to talk about the recently released Inspector General’s report, and things very quickly went off the rails from there. Take a look.

Rudy Giuliani:
Well, what they’ve been doing to them is heartless, it’s cruel.

Rudy Giuliani:
It’s an investigation made up of a bunch of distorted human beings who cried … Imagine FBI agents and prosecutors crying when Hillary Clinton wasn’t elected. I think if I could get those pictures of them crying instead of investigating President Trump, they should go to Bellevue.

I think “Whackadoodle” is actually the correct term, but I don’t think it applies to any of the agents that were listed in that Inspector General report.

“Whackadoodle,” though, is a perfect descriptor for Rudy Giuliani himself. This is a guy who cannot go out and give an interview as Donald Trump’s lawyer without implicating him in further criminal activity. This is a guy who, when he was running for president, Joe Biden described it best as his senses were composed of a noun, a verb, and the phrase “nine-eleven.”

Rudy Giuliani is a one-trick pony who can only talk about nine-eleven because that was the only time in his life he ever did something that was halfway decent. If you look at the rest of his political career, if you look at his career as a private attorney, or consultant, or whatever the hell he wanted to call himself during those years, he was nothing but an absolute and complete scumbag. And here he is slandering those people listed in the Inspector General’s report, making stuff up, baiting that little crowd to where you can hear in the video them chanting “Lock ’em up,” as if members of the Trump administration and Trump campaign weren’t the ones being locked up right now.

But still, they believe somehow [Peter Struck 00:02:22], [Lisa Page 00:02:23], and any of the other ones listed in there committed some kind of crime against the United States. What Giuliani should’ve actually also mentioned during his little speech there was the fact that buried in that IG report is the fact that there were Giuliani allies working at the FBI offices at New York that were so anti-Hillary that they were the ones that made the whole Anthony Wiener laptop thing resurface and essentially force James Comey to come out a few days before the election and make that announcement. Giuliani and his little lackeys are the ones that are the “Whackadoodles,” the ones that couldn’t stand losing, the ones that were politically motivated and actually helped change the course of the presidential election.

But, yeah, go out there! Say that these people belong in psych wards. Say that they’re “whackadoodles,” because most people in this country understand that those are things that apply to you more than they do these FBI agents.