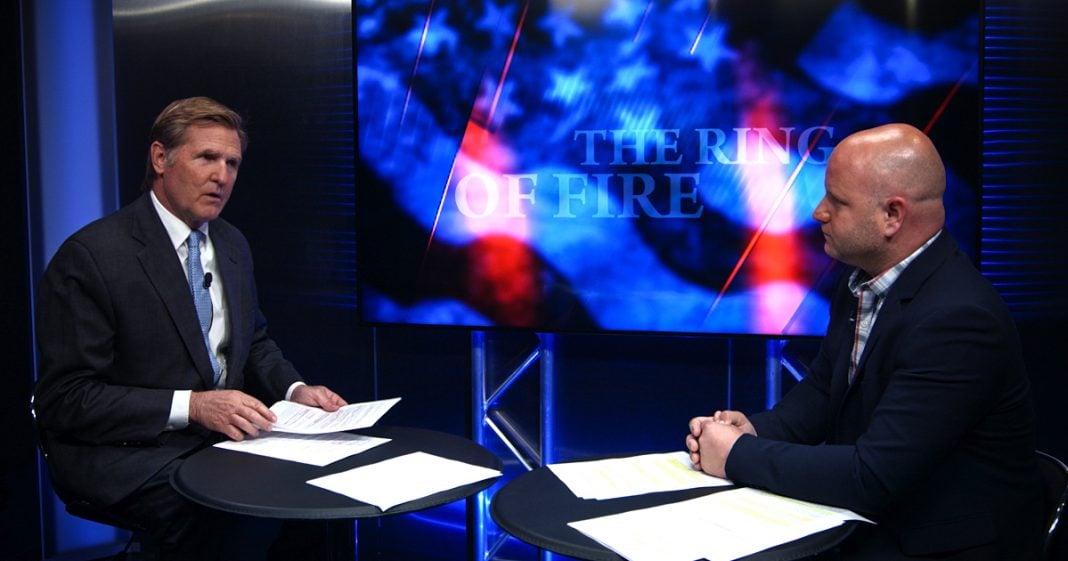 Bayer has won approval for its plan to purchase agriculture giant Monsanto. But what does this mean for consumers? Ring of Fire’s Mike Papantonio and Farron Cousins discuss this.

Mike Papantonio: Okay, so now we’ve got Monsanto teaming up with Bayer. All right, now, how ugly can that possibly get? You’ve got the two companies on the globe that are probably in the top five companies sued more than any company on the globe. Now, they’re coming together to start BS, BASF, because the truth is the rap on these companies is so bad, they have to hide behind a new name.

Farron Cousins: Well yeah, Bayer … I think it was like two days after the DOJ here approved the merger … it still has a little bit more to go through, but Bayer immediately came out and said, “Hey great, we’re gonna drop the Monsanto name. We’re not gonna use Monsanto.” As if that’s somehow going to exempt them from all of the liabilities that that company has built up over the last few decades. It won’t. They’re still-

Mike Papantonio: Well, that’s what they do, right? Matter of fact, I’ve caught DuPont, as we’ve talked about before, poisoning the water up in the Ohio River Valley. What DuPont tried to do was create another company and say to that other company, “You’re responsible for all the liability, all the death, all the poisoning, all the problems that you’ve caused internationally, you’re responsible for that now. And oh, by the way, you probably don’t have enough money to pay for all of it, so declare bankruptcy and we’ll tie the whole thing up in bankruptcy court.” That’s kinda what we see happening here. Monsanto knows the gig is up. They know people are dying from Non-Hodgkin’s Lymphoma, blood cancers, a whole host of physical problems, so that’s their next move.

Farron Cousins: Well, it’s a corporate shell game, really. DuPont’s done it. We’ve seen companies here down in South Florida do it when they buy an area where the water was just contaminated because they bought the corporation. They’ll spin off a shell company, say, “Okay, you own the liability on this water thing but we’re gonna fund you $100 million dollars, but you’re facing $2 billion in liability.”

Farron Cousins: And I guarantee you … we have not seen it yet, but Bayer is gonna try to do the same thing with Monsanto, and maybe create Bayer-Mon Chemical, and they’ve only got a hundred delays.

Farron Cousins: 30 years ago … 30 years ago, Nestle’s permit in San Bernardino expired. 1988. So at that point, they should not have been able to take a single drop of water out but instead, not only did they keep operating for those 30 years, they were taking tens of millions of gallons extra per year than what their other permit had even allowed-

Mike Papantonio: And it was … that permit wasn’t even in play, yeah.

Farron Cousins: So, they’re breaking the law, operating without a permit. They’re taking more than double what the permit would have even allowed had it been renewed. But they just said, “You know what? We don’t need to bother with renewing this. Nobody’s paying attention obviously, so let’s just pump.”

Mike Papantonio: This is … if you had a well in your home, okay? And your neighbor just says, “Okay, I’m gonna use his water. I’m just gonna pump his water out.” That is theft. That really is a charge. You could be charged with theft. Here you’ve got Nestle, this Swiss company, doing business over in the United States … you know there’s been zero charges on this? There has been zero criminal charges on this taking place. They’ve been stealing for 30 years, and if you went back … if these regulators or the maybe the Attorney General or maybe the Department of Justice would go back in the emails of Nestle, I promise you what they would find is they would find Nestle bragging about the fact that they have this cash cow in California. And yes, we know we’re affecting the water aquifer. And yes, we know we’re taking the water without paying for it, but life goes on.

Now, you’ll hear people talking about fracking … and fracking is horrendous what it does to the water table. It just poisons the water table, and it makes it useless. Well, Nestle here, it’s the same thing as fracking. Only they’re stealing the water. They’re stealing it from taxpayers. And the government says, “Oh, okay.”

Farron Cousins: Well, you know, here’s the thing too. A couple years ago, you had the CEO of Nestle come out and try to say that water is not a basic human right-

Farron Cousins: Even though human life cannot exist without water, it’s not necessary because Nestle wants to go all along the globe and do what they’re doing in San Bernardino, which they pretty much are doing all around the globe, take as much water as possible, bottle it back up, and sell it back to these communities for an astronomical profit. And if they run out of water, okay, Nestle can move to the next place but those people that live in those areas can’t. They’re stricken with drought, crop damage because all the water’s been pumped-

Farron Cousins: Right. And that’s what Nestle wants to do. And again, they only agreed to stop pumping water for 30 days while they work out their new agreement.

Mike Papantonio: While they work out their new agreement. No discussion from anybody that shouldn’t we put these thugs in prison? Shouldn’t somebody be arrested for this? Well let me tell you … we have about a minute and a half. I wanna tell you this other part of the story. You and I have covered this. First of all, the water in Nestle’s bottled water is horrendous. What they’re finding in this bottled water is they’re finding plastic pieces, little shaved off pieces by the tens of thousands in bottled water. So, that’s the first hit.

And it just so happens, Nestle is like way high on the list of having the most contaminated … the water that’s most contaminated with these little plastic shards … they’re microscopic. You can’t even see them, but if you’re drinking that water all day, it’s staying with you. And it becomes systemic at some point.

Farron Cousins: Right. And you know, first of all, there’s no health studies on what these microplastics do the human body. They know it’s not good but they haven’t been around long enough for people to be able to study them. And two, as you pointed out, Nestle is worst of all. But three, and this is the worst part of the story, when they pump that water out of the ground, it doesn’t have those plastics in it. So, whatever Nestle does when they take it back to their bottling facility is what’s adding that plastic. You know, whether it’s intentional … I don’t think that would be intentional but-

Mike Papantonio: They’re gonna save a little bit of money by not getting it out, so they save some money. And consumers, again, become the victims.