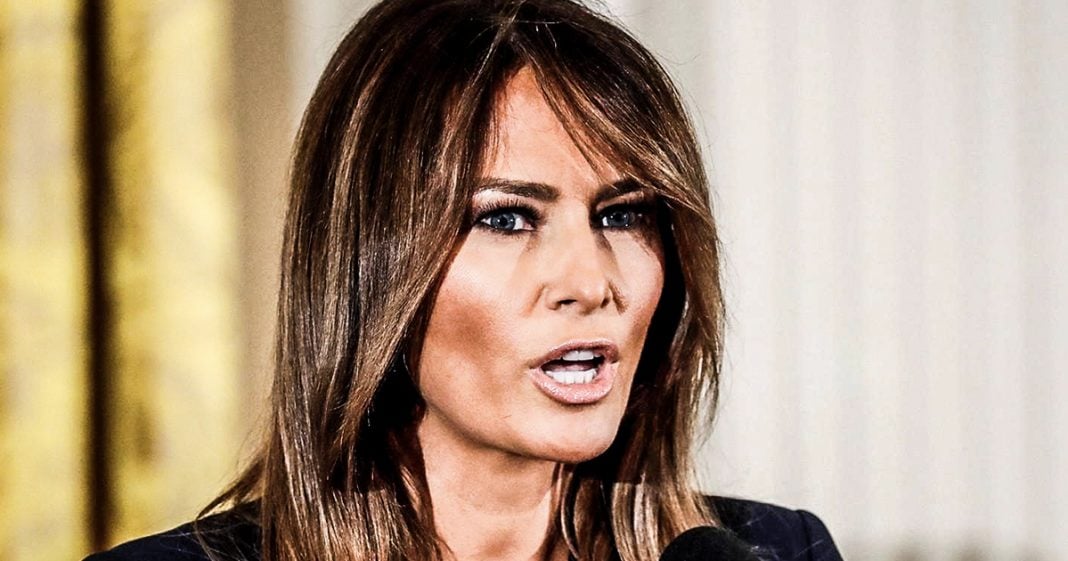 In an official statement from her office as First Lady, Melania Trump said that she “hates” to see children ripped from their parents as part of her husband’s immigration policy, but then she proceeded to push the blame onto the Democratic Party. This is a Trump policy – he owns this, and the Democrats are the only ones trying to fix it. Ring of Fire’s Farron Cousins discusses this.

Over the weekend Melania Trump, First Lady of the United States, her office released a statement saying that Melania absolutely hates to see children separated from their parents when crossing the US border. Now, this is a sentiment that most of us here in the United States share. We hate this policy, we hate to see it, and most of us strongly dislike the man who implemented it, so it’s not a surprise that Melania Trump would finally come out and say hey, I hate this too. Then, after her spokesperson, Stephanie Grisham, said that Melania absolutely hates this policy she then went on to go ahead and do what most Republicans have also done and, basically, blame the Democrats for making this problem. She said that, “Democrats and Republicans need to find a way to get together and end this. The Democrats have to be willing to work to get this done, so we can just stop doing this.”

Guess what, Melania? While you were sending out these idiotic statements through your spokesperson Democrats in DC were actually working on legislation that will put an end to this practice and not one single Republican was willing to sign onto it. Not one! Democrats are doing everything that they can in their power to end this separation of families at the US borders, but Republicans are not willing to do it. Meanwhile, you have people like Melania Trump, and her husband, and every other member of this administration going out there trying to tell the public that this is somehow the Democrats’ fault, or worse you have the Secretary of the Department of Homeland Security, Kirsten Nielsen, who actually came out and denied that the policy even exists even though we have a memo from Jeff Sessions saying, “This is what we’re gonna to do, we’re gonna to take the children away from their parents if they cross the border illegally.”

It is the policy of this administration, it was created by this administration, Donald Trump owns it, Jeff Sessions owns it, the Republicans own it, and the Democrats, to their credit, are actually trying to put an end to it. It is the cans who are obstructing this. It is the Republicans who are not willing to sign on and put an end to this. Now, we have the UN Human Rights Council telling the US that we have to stop this.

Everything coming out of this administration right now, including the words of the First Lady, are a lie. The Democrats are trying to fix it, the Republicans want to leave it in place because they think it’s going to eventually help them politically, but as more and more people get to tour these detention facilities and report on what’s actually happening in there, and more and more of those photos come back I have no doubt that this is going to sink the entire Republican Party.