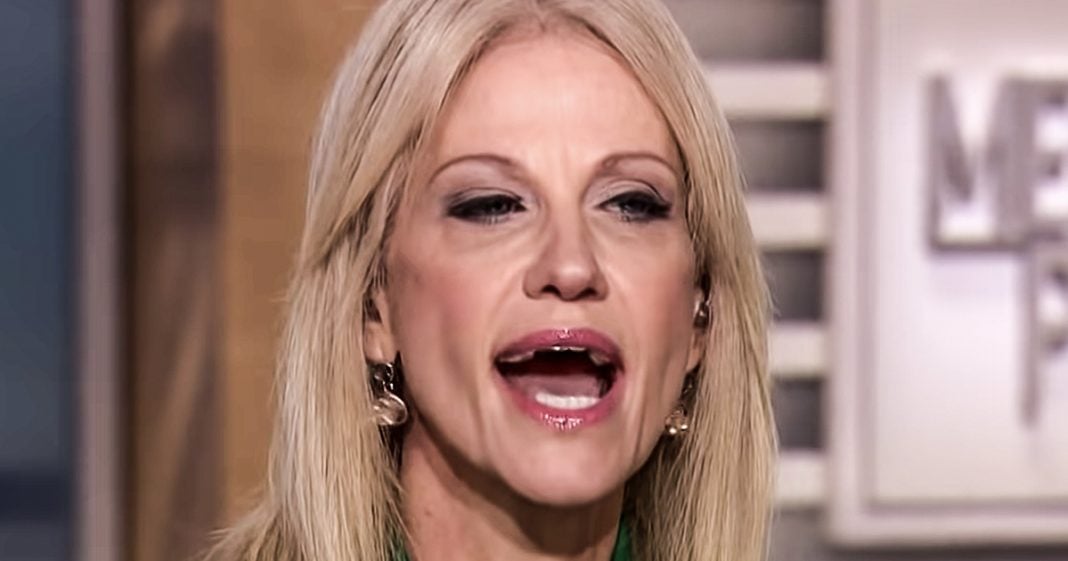 During an appearance on Meet The Press this weekend, Kellyanne Conway told host Chuck Todd that the Democrats should have stopped Donald Trump’s policy of separating immigrant families before it ever began. After Chuck Todd pointed out that this would have been impossible since they didn’t know it was coming, Conway again tried to blame Democrats rather than admit that she was lying. Ring of Fire’s Farron Cousins discusses this.

NBC thought it would be a good idea this past weekend to bring on Kellyanne Conway to speak with Chuck Todd on Meet The Press. And obviously, the biggest issue in the country right now is the Trump Administration’s policy of separating children from their parents if they illegally cross the border. And Kellyanne Conway actually had some very interesting things to say about not only the policy, but the reason that it is in place. Take a look.

Kellyanne:
Chuck, I don’t remember a single Democrat, I could be mistaken, maybe one rumored it. But in the one hour meeting back in January, in the Cabinet Room where the President invited Senators and Congressmen from the Republicans and the Democratic parties to the Cabinet Room, I believe that your cable station covered it live [crosstalk 00:00:47]-

Kellyanne:
In full. One hour. Did this issue come up? The Democrats only want to talk about DACA, the Dreamers [crosstalk 00:00:53], why aren’t they mentioning this?

Chuck Todd:
But in fairness, kids weren’t being separated from their parents then. This policy [crosstalk 00:00:58] got implemented in April, the Zero Tolerance policy where every migrant-

Chuck Todd:
Every asylum seeker is treated as a criminal.

Kellyanne:
It’s adjudicated, it’s adjudicated. What they should’ve said is look, we had a surge over the border in 2014, Mr. President under President Obama and it shocked everyone, and we simply didn’t have the capacity. We want to avoid that in the future and work with you.

Look, the Democrats outta just sign it, why don’t they say we’re for open borders? But they have to be serious. Look-

So there it is. If the Democrats had just been psychic, and would’ve known to have brought up a policy that they didn’t know about during a meeting that happened several weeks before the policy was put in place, then they somehow could have stopped this.

Now perhaps Kellyanne Conway spent her entire weekend binging on Back To The Future movies, I don’t know. Maybe she was watching X-men or something and thought hey, those guys, some of them can see into the future, they could read people’s minds, they know what’s gonna happen, why can’t the Democrats do that?

Maybe I can use that to blame them for everything horrible in this country. Because, that is exactly what she just did there. She took the worst policy from this administration and somehow twisted it into being the Democrats’ fault for not stopping it before they knew it existed.

Something they could only pull off if one; they were psychic, or two; they had a time machine. Kellyanne Conway is absolutely bending the very rules of logic and reality here, in order to defend this monstrous policy. It’s the same thing that Melania Trump has done, it’s the same thing Trump himself is doing.

And again, we have to mention the fact that the Democrats have actually put forth legislation to stop this, to put an end to it. And no Republicans have joined in. Not one, not even the Moderates. The alleged Moderates I should say. There are no Moderates in the Republican party, let’s end that myth right now.

Susan Collins, she won’t sign on to it, she sides with Trump. And now, Kellyanne Conway is going out there trying to blame the Democrats for them ’cause she thinks it’s going to hurt them in the mid-terms, and maybe get to bend a little bit and give Donald Trump the money that he wants to build his wall.

Because, at the end of the day, that’s what this is about. This is the Trump administration holding these children hostage in cages, until he gets the funding for his border wall. Here is my advice to every media outlet in this country, and I know Fox won’t listen to it, but to everyone else.

Do not put on another Republican. Do not put on any member of this administration until they end this disastrous policy. The one thing they want more than anything else on this planet is the loudest voice in the room. And the media right now has the power to take that voice away from them.