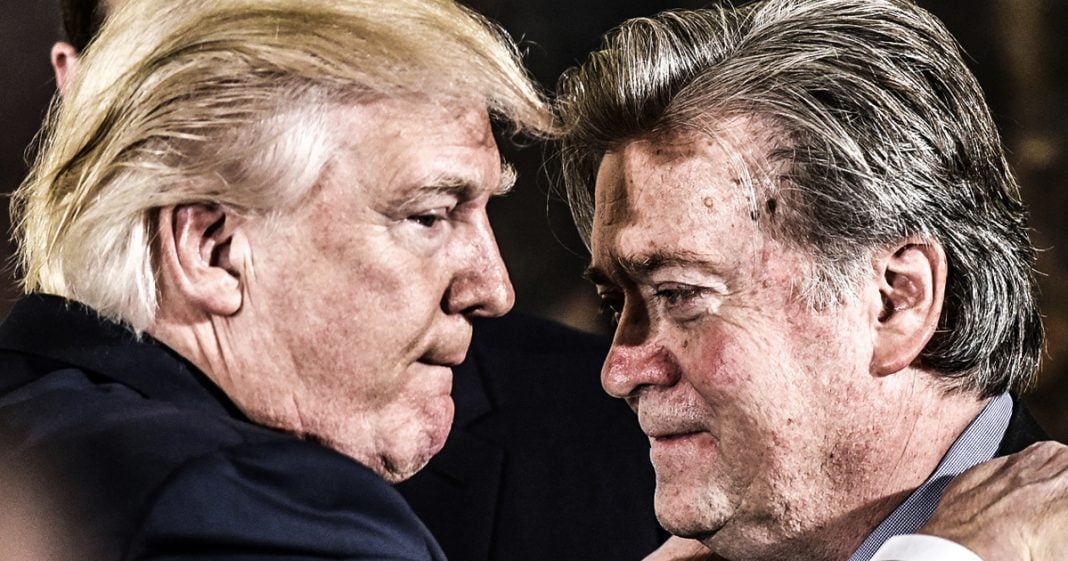 Former Trump advisor Steve Bannon appeared on ABC’s This Week on Sunday and said what might be the biggest lie that anyone has ever said about Donald Trump. Bannon claims that Trump has never lied, a claim that has been repeatedly debunked on a near-daily basis. Ring of Fire’s Farron Cousins discusses the cult of Trump worshippers and why they try to push this myth that Trump is a god-like figure who is incapable of doing wrong.

Donald Trump’s former Chief Strategist, Steve Bannon, appeared on ABC’s This Week, this past Sunday. Where he admitted that he doesn’t think the president has ever told a lie. According to Steve Bannon, a guy whose spent several years watching Donald Trump, spent a lot of close time with him personally, says that Donald Trump, to his knowledge, has never told a lie, except actually, that one time he called him “Sloppy Steve.” According to Bannon, that is the only lie that Donald Trump has told.

Now here the thing, we obviously all know that Donald Trump tells lies. He’s average a little over six and a half lies per day, and in fact, this past Friday, managed to tell more then 14 lies to the public, before noon. One day. 14 lies. Before noon. Donald Trump does lie. And you know what? Let’s be honest for a second. Everybody, in the world, lies, or has lied. Okay? It’s not a unique phenomenon. Donald Trump didn’t create it, he didn’t perfect it, he just does it more then most people.

But for a guy like Steve Bannon to go out there and essentially try to deify Donald Trump, say that he is something greater then human, a man that is incapable of telling a lie, is absolute cultist behavior. And it’s what we see from the hardcore Trump people, in this country. They look at Donald Trump as if he is a god. He is infallible. He is incapable of making any kind of mistake. He doesn’t lie, he doesn’t engage in corruption, he doesn’t do anything wrong ever, he is a messiah to these people, and yes, that would make them a cult.

And why ABC thought it was a good idea to being Steve Bannon on it and even talk to him in the first place, is beyond me. Let alone, let him go out there and spread this cult propaganda for the entire country to see. Steve Bannon has nothing of value to say to anyone, at any point, at any time. There is no reason for us to ever turn on a television and see Steve Bannon giving an interview. The man, just like Donald Trump, is an absolute liar.

We shouldn’t have to listen to anything that he says. Yet ABC decided to put him on anyway and give him a platform to spread this Donald Trump cult propaganda. And maybe, if Bannon’s lucky, record, recruit a few more members to this insane cult of personality, that he helped create for Donald Trump.