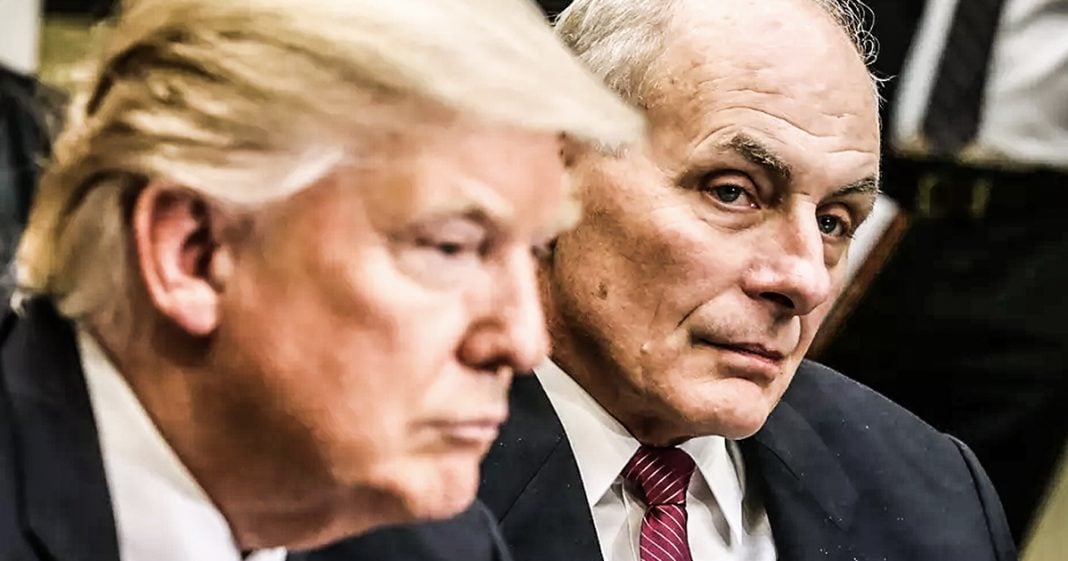 According to a new report in The New York Times, Donald Trump’s chief of staff John Kelly feels like the White House is a “miserable place to work.” Part of the reason Kelly describes the White House as such is that he is unable to get control over an increasingly-unpredictable President and his staff, making his job chaotic and unmanageable. Ring of Fire’s Farron Cousins discusses this.

Let’s be honest, a lot of people in this country don’t like their jobs. Maybe you don’t get paid enough, maybe you don’t get the respect you deserve, maybe it’s not challenging enough for you. But either way, there are a lot of people in this country who just really don’t like their jobs. And you know who we can put into that list? John Kelly, Donald Trump’s Chief of Staff.

According to a New York Times report that came out this past weekend, John Kelly told a group of Republicans recently that the White House is, “A miserable place to work.” Now, the reason that Kelly gave as to the White House being a miserable place to work is first and foremost, Donald Trump. John Kelly was supposed to come in, be the so-called “adult in the room,” that’s how everybody was describing him at the time. But instead, he has found it nearly impossible to reign in Donald Trump to get him under control, and to make him understand that he can not behave the way that he is currently behaving. John Kelly, by every possible measure has completely failed. And it’s not just that he’s failed, it’s that everybody in this country has watched him fail from day one. There has been no change whatsoever in Donald Trump’s behavior from when they brought in this so-called “adult in the room”. John Kelly was so overhyped that he could not possibly live up to that. So he knows that not only did he let himself down, but he let down everybody in this country, who basically vouched for him, saying that he was gonna reign in Trump, and make things less crazy.

But it’s not just Donald Trump. It’s actually also everybody else in the White House who John Kelly has lost complete control over. With the constant leaking, the constant infighting that we’ve heard about from these people inside the White House, the staffers, the communication’s department, the fact that nobody’s on the same page, Sarah Huckabee Sanders’ non-stop lies. John Kelly put his entire reputation on the line to come into the White House, and make it better. And instead, it has steadily gotten worse ever since he became Chief of Staff, and I don’t think it’s because of him, I think it’s in spite of him. I think John Kelly thought he could be effective, when in reality, there is no person you could bring in to this administration to make them act like grown-ups. Donald Trump has never had to be a real adult, a real human being actually, throughout his entire life. He has had everything handed to him, he was born a millionaire, he’s always gonna have money, he’s always had money, he’s always been able to do whatever the hell he wants without anybody telling him no. So what made John Kelly even think that he could come in there and tell him no? Or tell him to change?

Trump wants to do things his way, and as disastrous as that is, there’s nobody in this country that’s gonna be able to convince him otherwise. Kelly needs to leave. And according to the New York Times report, Kelly wants to leave. So the big question I have now is, what’s stopping you? You’re not doing anything in that White House that is effective in any way, whatsoever. The best thing you could do, if you wanna walk away from this with a little bit of credibility, with a little bit of public adoration, whatever you have left, that you haven’t squandered yet, the best thing you could do is tender your resignation, walk out those White House doors, and never look back.