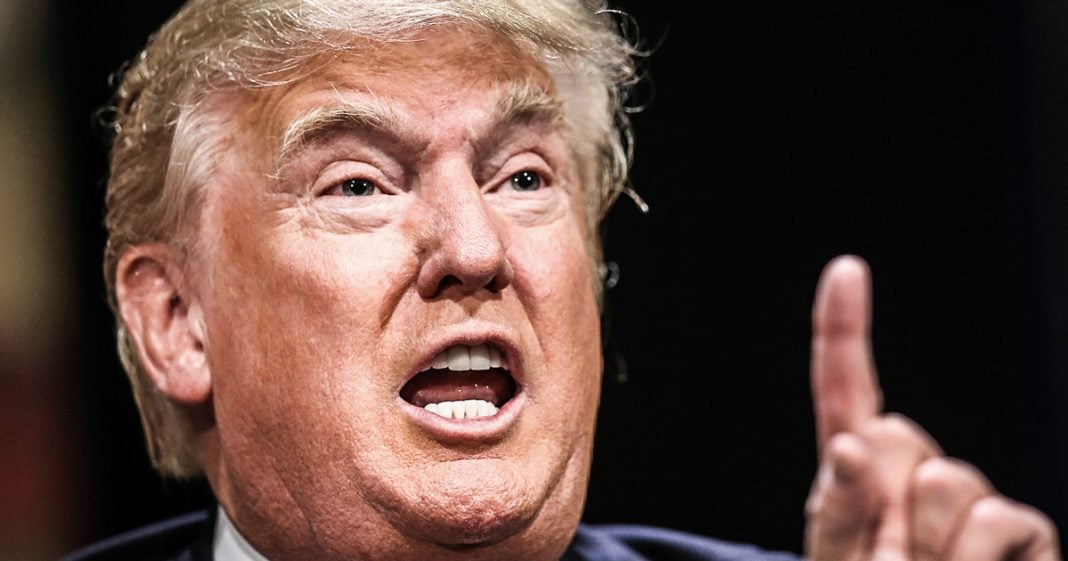 This week, legislation was proposed that could have put an end to Donald Trump’s disastrous tariff policies and taken that power away from him, but it was blocked in committee by Republican Senator James Inhofe. Republicans are showing just how weak they are and how little they care about the future of this country by constantly bowing to Trump, as Ring of Fire’s Farron Cousins explains.

Democrats and Republicans actually came together this week to do something that would actually benefit people here in the United States. What they did was they drafted an amendment. This was actually led by Republican Senator Bob Corker. They drafted an amendment to the National Defense Authorization Act of 2019 that would prevent Donald Trump from imposing tariffs using the national security banner that he’s been using to impose these tariffs, which is complete nonsense.

Basically, what they wanted to do was, they crafted an amendment to strip Donald Trump of his ability to impose these tariffs that have already cost U.S. farmers over half a billion dollars, so far. World Bank is telling us they’re going to cripple our economy. Goldman Sachs is telling us they’re going to cause a massive recession, so Democrats and Republicans, a few of them, had said, “You know what? We have to stop this before he tanks the economy.”

Then Republican Senator Jim Inhofe, the chair of the committee where this amendment was proposed, blocked it. He just said, “No. I’m not even going to bring this up for a committee discussion.” That effectively killed that amendment to the NDAA of 2019. Dead, gone. Jim Inhofe said, “Hell, no. I’m not going to let you take this power away from Donald Trump. I’m not going to even entertain the thought of it.” Perhaps Inhofe had more snowballs to go find, so that he could prove that climate change wasn’t happening. Jim Inhofe is, by far, the dumbest person serving in the United States Senate today. And he’s a very close second to Paul Ryan, in the House, of being the dumbest person serving in Washington D.C. today.

But I have nothing but contempt and disdain for a guy like Jim Inhofe, not only on the issue of climate change, but on this issue as well. We have been warned by private institutions, by government institutions, and by independent economists, some of whom who have won Nobel Prizes and Pulitzer Prizes, that these tariffs are going to cause a recession here in the United States. A crash on the level of what we saw in 2008. Those are the words they used, “On the same level as 2008, possibly worse.” And these idiot spineless Republicans blocked a measure that would have stopped these tariffs in their tracks.

Remember that. Remember that when you go to the polls this November and you see what’s happened to the economy. Because, again, half a billion dollars just in farming goods lost, in less than a month of these tariffs being in place. Can you imagine what kind of damage they’re going to inflict by November? July, August, September, October, November. We’ve got half a billion in a little under a month there and we’ve got five more to go before the midterms.

Again, Jim Inhofe, you’re a complete moron. You, along with Trump, himself, by imposing these tariffs, are helping to tank your own party in the midterms. To be honest, for that I want to thank you, but, at the same time, it’s not even worth watching the Republican Party crumble, if it also means crumbling the United States economy, ruining the lives of countless people who will lose everything because of these tariffs. But it’s all because you, and many other Republicans like you, lack the guts to standup to a sycophantic want-to-be dictator, like Donald Trump.