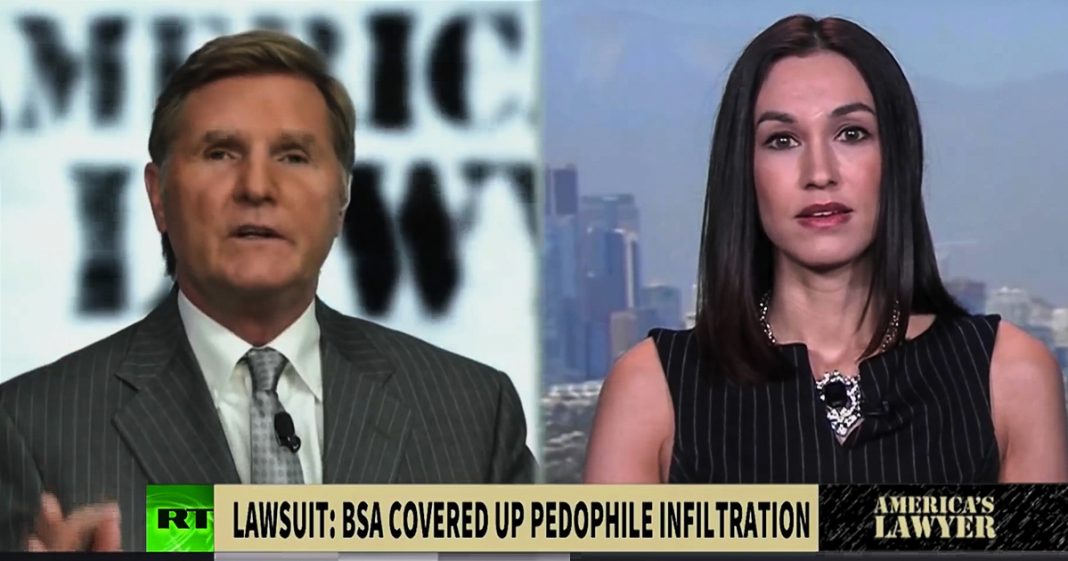 Via America’s Lawyer: Mike Papantonio and Brigida Santos reveal the details of a case that accuses the Boy Scouts of America of covering up a pedophile scandal.

Mike Papantonio: The Boy Scouts of America are being accused of allowing known pedophiles to volunteer as scout leaders for the organization. The accusations are being made by a former member who says one of those pedophiles was relocated after allegedly sexually abusing boys in Georgia.

Joining me to talk about this is RT correspondent, Brigida Santos. Brigida, the person accusing the boy scouts of these charges. He has actually filed the lawsuit. What does the lawsuit say happened to the former member?

Brigida Santos: So the lawsuit says exactly what you said, that the Boy Scouts of America and knowingly allowed a scout leader named Samuel Otts to relocate from Georgia to Arkansas. While he was in Georgia, he was accused of sexually assaulting young boys and when he got to Arkansas, that’s when the plaintiff in this case, William Stevens, says that Otts sexually abused him at least eight times, beginning in 1979 when he was about 10 years old.

Now, Stevens is alleging that the Boy Scouts of America has done a huge campaign over the years to hide any allegations of sexual assault as well as known pedophilia cases within the organization from the members, their parents and the public, so he is now seeking monetary damages from the organization as well as the Arkansas chapter for negligence and abuse. As for the scout leader who was accused of sexual assault in this case, he is believed to be deceased.

Mike Papantonio: Yeah, I mean this is unfolding the same way that it does for Hollywood, the same way it does for the Catholic Church, the same way it does for the University of Southern Cal, I mean it’s all the same kind of mechanism. If you take one of these issues and lay it on top of the other, it always looks the same. We heard early reports that were kicking around about the same problem existing in the Scouts and now something called The Perversion Files. Literally, that’s what it was called, was made public a few years back on that particular organization, the Perversion Files. What are those documents reveal and how does it relate to the recent lawsuit, Brigida?

Brigida Santos: The Perversion Files were initially called the ineligible volunteer files and they were a list of volunteers who had been flagged and mainly for allegations of sexual assault. Now, they were only made public in 2012, thanks to a court order and still the Boy Scouts of America has done a great job at trying to hide it. The LA Times actually put the entire list out in 2012, but a lot of members are still unaware of the existence of this list.

And the reason why it is relevant in this case is because the plaintiff William Stevens says that he first learned about the fact that the Boy Scouts of America knew and had listed his abuser on the Perversion Files list.

Mike Papantonio: And apparently they’re doing the same thing the Catholic Church does. They get caught for some kind of perversion on one place and then they move that person to another place and nobody talks about it.

Well yeah, they’re going to lose their job. They should lose their job. Same things happen at USC. The issue is the same. It plays out the same way every time, and then this other issue, the statute of limitations, for example, keeps coming up as a barrier against former scouts who want to take their abusers to court. For those not familiar with that, explain what that is and how it’s established, this idea of statute of limitation, especially in a sexual abuse case of a minor.

Brigida Santos: So the statute of limitations are laws that are put in place that put a maximum timeframe after an event for which somebody can bring forward a lawsuit and they are initially implemented with the idea that people should file a lawsuit within a reasonable timeframe in order to preserve any type of evidence that might be there. But in this case, the plaintiff says that he had no way to know that the Boy Scouts of America acted negligently and fraudulently until after he had read the publication himself listing the name of his abuser in it. So he is now able to sue on those grounds.

Mike Papantonio: Well, let me point … There’s all kinds of ways to get around the statute of limitation, all kinds of ways. First of all, this is a story that that developed slowly. There’s no … Nobody was put on notice on day one that the … There’s a bunch of perverts running around in the Boy Scouts and that there are sexual abuse issues are taking place around the country. That didn’t just happen all on one day. It’s a progressive amount of information that is fed out to the country.

The second part of it is you look to see what did that organization do to prevent that information from getting out? If they intentionally presented that information getting out, that affects statute of limitations. So just because something happened years ago and you’re just now saying, “Well, I want to do something,” don’t assume that there’s not a case there, I think is the point I’m trying to make. What has the organization done in recent times, Brigida, to deal with these allegations? How have they handled it?

Brigida Santos: They mainly settle. In fact, just this week they settled with another former member who had been sexually assaulted as well, but mostly they just put these people on a probation list. They are still trying to pretend that these files don’t exist. At one point, there were 20,000 people on a secret list of known pedophiles that had infiltrated the organization. So this is a widespread problem and it’s absolutely disturbing that these are children that are in the hands of these pedophiles.

Mike Papantonio: Here’s the real bad news. I used to be a prosecutor. I can attest to the fact it’s very, very difficult to rehabilitate a pedophile. Out of all of the rehabilitation analysis, the pedophile is virtually … It’s very difficult to rehabilitate a pedophile, so nothing gets better simply because you put them away for a while or you put them out of the way. It’s there and it’s a problem. Brigida, thank you for joining me.