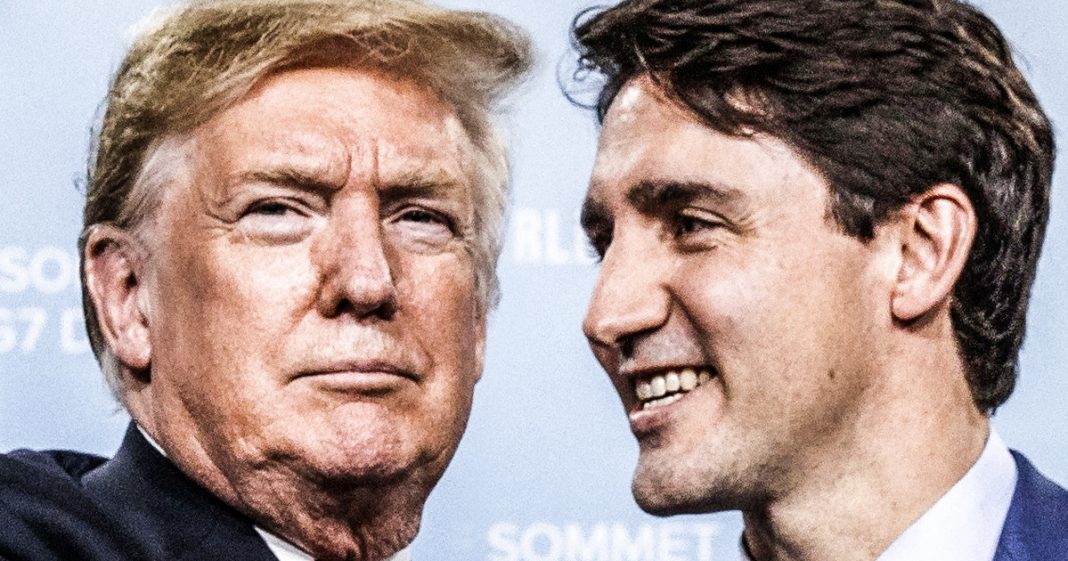 It has certainly been a weird few days for the United States. Shortly after Trump’s meeting with Kim Jong Un, Trump gave an interview to ABC where he said that he actually trusts Kim. This is an odd statement from a man that recently left a meeting with our closest allies at the G7 Summit and acted like he hated everyone in that room, including Canadian Prime Minister Justin Trudeau. Ring of Fire’s Farron Cousins discusses this.

Now that Donald Trump’s whirlwind foreign policy tour has come to an end I think it’s important that we actually analyzed what the president was able to accomplish and all of the harm that he inflicted upon the world with his visits to both Canada and Singapore.

Let’s start with North Korea. In an interview with ABC’s George Stephanopoulos after he met with Kim Jong Un, Donald Trump said that, “I trust him, I trust him very much,” when referring to Kim Jong Un. Now this is a man, Kim Jong Un, who is a brutal dictator from North Korea, has murdered countless members of his own society, leaves the rest to starve, to live with absolutely nothing and Donald Trump says, I trust him. He had nothing but the highest praise for this man, put him on his same level with the rest of the world to see and praised him.

So let’s rewind the clock a few days before Donald Trump even got to Singapore, where was he before that? Canada. He was in Canada meeting with Prime Ministers of Japan, Canada, Germany, France, everybody, the G7 right, our allies. The people that we depend on if we need some kind of military aide, or we need humanitarian aide, or we need trade agreements worked out, these are our buddies and our friends, and Trump treated them like he should have treated Kim Jong Un.

In that same interview with Stephanopoulos Donal Trump said, oh the media’s lying about what happened at the actual G7 summit, everybody left there in a really great mood and really happy with each other but then Justin Trudeau came out and was so insincere, just so wrong about the whole tariff situation and he just made everything horrible,

Not to mention the fact he pissed of Angela Merkel, he pissed off Emmanuel Macron from France, he pissed everybody off because he was acting like a whiny, petulant child at that G7 meeting. Nobody left there happy about what he said, or what he did, or that he was even there. Trump is lying about that and we know it based on the statements they’ve given ever since he left that meeting.

But it should give everyone in this country a little bit cause for concern about the fact that Donal Trump can get along swimmingly with some of the most murderous dictators in the world, yet struggles to be friends with people who have been allies of the United States for decades. That’s not how foreign policy works, unless of course you yourself as Fox News accidentally called him, are actually a dictator.