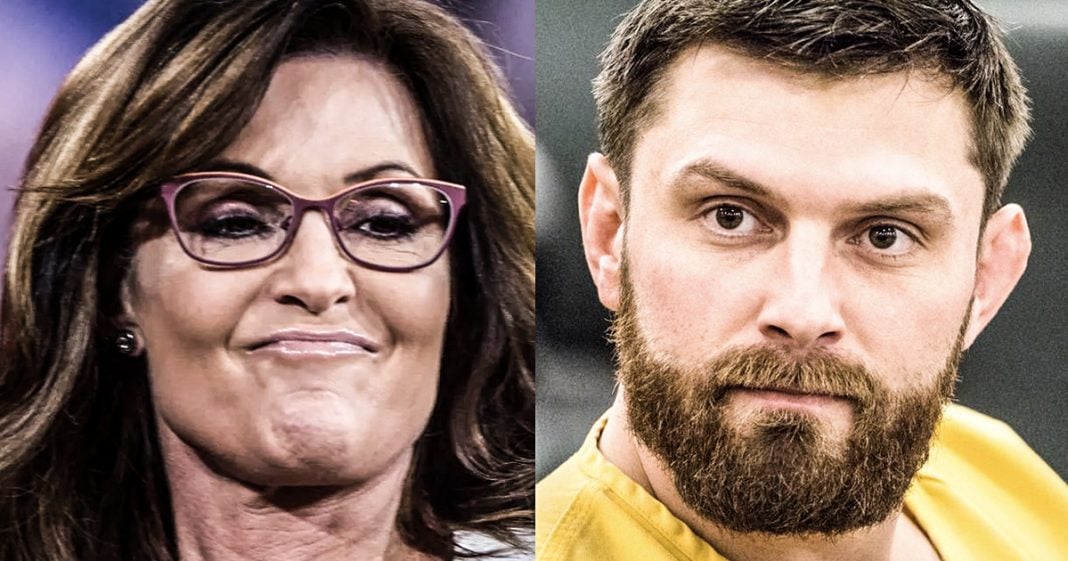 A Veterans’ Court judge has denied a motion by Track Palin, the son of Sarah Palin, to deny media access to the courtroom during his upcoming assault trial. Palin claimed that the media being present would be a distraction for the other vets coming before the court, but the judge said that banning them would be a violation of their rights. Ring of Fire’s Farron Cousins discusses this.

Track Palin, the son of former Vice Presidential candidate, Sarah Palin, was in court recently for assaulting his father back in December. Now when he went to court, he and his lawyer, before they entered a plea, before they ever made a single argument about his guilt or innocence, actually tried to get the judge to ban the media from being able to come inside that court room. According to Track and his lawyer, they didn’t want to distract all the other veterans that were in that court room. You see, the reason that’s important is because Track’s not going to a regular send you to jail court. No, he gets to go to a special veterans court where they don’t necessarily send people to jail. They just work on rehabilitation, getting them the mental services that they need to help, the counseling and all that, so Palin doesn’t have to worry about going to jail. They tried to argue that because this is a special court, we should get rid of the media so that these other veterans waiting in line, they don’t have to deal with the circus. It’s not fair to them.

Well, the judge said, “Yeah, I don’t buy it, so I’ll ban cameras for you, but reporters are still gonna be allowed to come in here and document everything that happens, and then go and report on it because if I ban them, I’m then denying them their constitutional rights.” Good on this judge for not letting Track Palin hide his disgusting behavior from the American public. Is it relevant what Track Palin does? Hell yeah, it is. Sarah Palin still sometimes shows up at Donald Trump rallies. She goes out there in the media talking about conservative policies. If this is the kind of family she raised, then I think we need to know about who this woman truly is and what her family is actually doing, rather than taking her at face value when she goes out there and spews Republics/Donald Trump talking points.

Now, in case you’re unfamiliar with what Track Palin did, let me give you a quick rundown. I’ve read through the police affidavits on this, and it’s a pretty disgusting story. Track Palin shows up. Well, actually first, he calls his parents back in December. He said he had been drinking. He had been taking some medications. They didn’t know what, but he said, “I’m gonna come over there. I gotta take the truck.” Todd Palin, Sarah’s husband, said, “No, you have been drinking. Do not get in the car and drive.” Responsible for Todd there, good job. Track says, “Nope. I’m gonna come over there and I’m gonna beat your ass.”

So, Track shows up at the house. Todd Palin is at the door with his gun. So Track, then, goes around back, breaks a window, comes in, overpowers his own father who has a gun, beats the hell out of him, and then this is where things get a little interesting here. Todd Palin, who still has his gun, manages to get away from his son. According to the police affidavit, exits and then flees the house. Sarah Palin was still in the house. Todd Palin, the good guy with the gun, that Republicans like to say, said, “To hell with this. I am not going to protect my own wife against this psychopath in my home. I’m gonna leave and save my own ass.” That’s important. That’s a part of the story that most people haven’t heard yet. The man fled, even though he had the weapon, knowing that his son was unhinged and was going to hurt them, still left Sarah in the house to fend for herself.

This is Track Palin’s second domestic violence incident in less than two years, but nonetheless, it kind of shows us a lot of things. First and foremost, we’ve got to work on veterans’ health. We’ve got to get mental health counseling for these veterans. I agree with that 100%, and not doing that is a dereliction of duty for the United States, but second of all, also kind of blows open that whole Republican talking point that all these psychopaths out there are the result of bad parenting, doesn’t it? Because they say that. They say that after there’s a mass shooting. They say that after there’s a massacre. Oh, where were the parents? Where were Sarah Palin’s parents? Where was that good guy with the gun who allegedly was there? We know he was there, we know he had the gun, and we know he ran away and didn’t bother to protect his wife.

So, there you go. Not only are the Palins complete hypocrites, but this whole little incident managed to dispel at least two massive Republican talking points about mental health here in the United States.