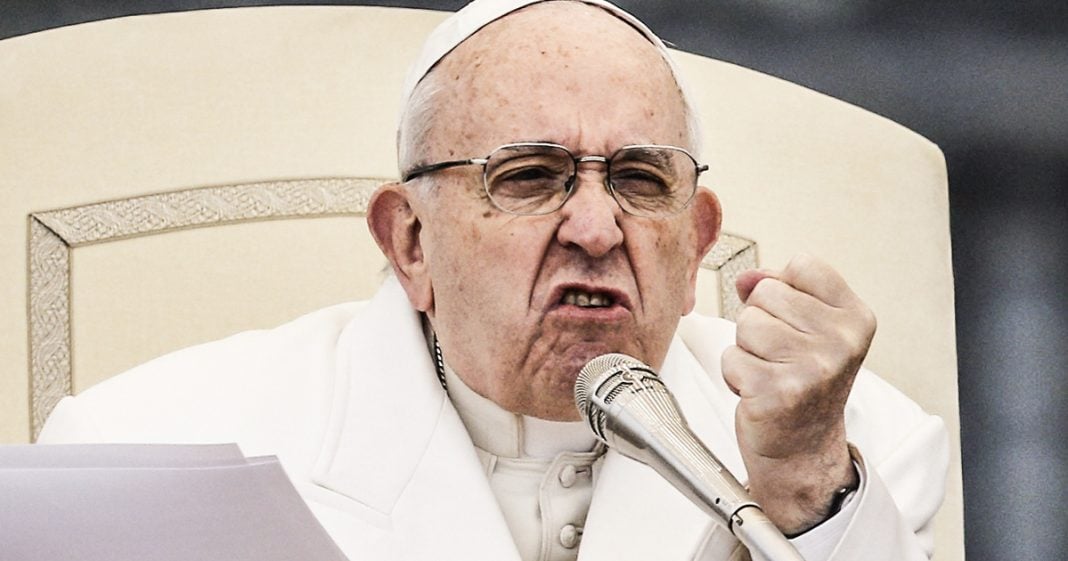 At a recent gathering of business leaders at the Vatican, Pope Francis warned those in attendance – which included executives from some of the world’s largest energy companies – to stop delaying action on climate change. Will these business leaders continue their pursuit for endless profits over the words of a man that is supposed to be a prophet of God? Time will tell, but the dollar is much more tempting to people who lack any kind of moral compass. Ring of Fire’s Farron Cousins discusses this.

Last weekend, Pope Francis invited business leaders from around the globe to the Vatican, which included a lot of people from the fossil fuel industry. We had a lot of fossil fuel CEOs attend this meeting at the Vatican, where Pope Francis proceeded to basically scold these business leaders for doing absolutely nothing except making the problem worse on the issue of climate change.

Now I’m sure these business leaders probably had a little bit of an inkling as to what was going to happen at this meeting but they decided to show up nonetheless. Rather than being told by Pope Francis that you should give money to the poor, you should help out people, he scolded them, got onto them because this is a smart man about what they’re doing to the planet.

Honestly, I don’t think the people who attended this meeting were quite expecting that. Because it’s one thing to walk outside your office and be confronted by activists. It’s one thing to have Hollywood celebrities talk down to you for destroying the planet. It is an entirely different thing when you have a man who is arguably the most holy man in the world, the Pope of the entire Catholic faith, telling you that what you’re doing is wrong, that what you’re doing has to stop, and that you’ve got to make it better.

That’s a kind of scolding or lecturing that you can’t just walk away from and shrug off. That’s the kind of negative PR that’s going to plague you forever and I am beyond thrilled that Pope Francis decided to do that. Because in terms of climate change, if you want to look at it from a purely religious perspective, and I understand a lot of people aren’t religious, that’s fine. Nothing wrong with that at all. There’s nothing wrong with being religious, just don’t shove it in anybody’s face. But if you are religious and you support the destruction of the environment, then aren’t you going against God’s will?

I wrote a paper a few years ago where I went through and I found all these Bible verses about the importance of protecting the environment. Of making sure we do not sully what God had given us. And that is what Pope Francis is trying to say. You cannot both be a good religious person and at the same time support people like the CEOs present there, including the Exxon CEO. You can’t support them. You can’t support politicians who support these people. You cannot support anyone who advocates environmental destruction while at the same time calling yourself a Christian.

Pope Francis understands it. We have about five politicians here in the United States that actually understand it. But these business leaders who met at the Vatican don’t get it and they probably never will. Because I’m sure it was hard to shake off that tongue-lashing from the Pope, but I’m willing to bet that as soon as these men and women go back to their businesses and see their hordes of cash and check their bank account balances, they’ll forget all about that little lecture on saving the planet that they just got from the Pope.