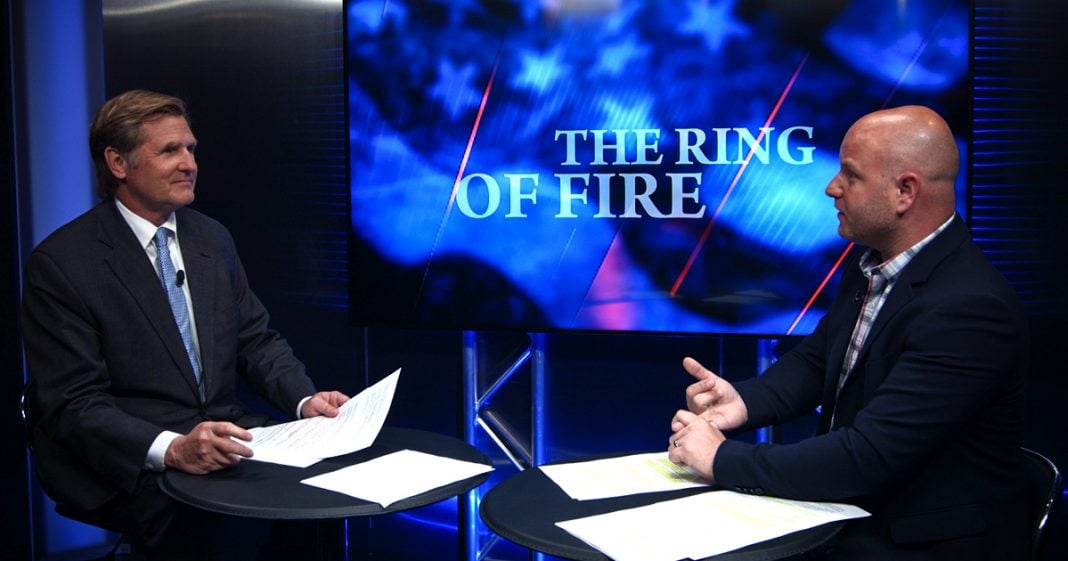 A federal judge has ordered the EPA to release their scientific evidence showing that climate change is NOT caused by human activity – evidence that Scott Pruitt swore he had during an interview. Ring of Fire’s Mike Papantonio and Farron Cousins discuss the case.

Mike Papantonio: A federal judge has ordered the EPA to release their scientific evidence showing clearly that climate change is not caused by human activity, according to Pruitt. There’s no connection in his clear mind. Well, Scott Pruitt swore that during an interview. He swore there’s just no connection. Environmental groups say, “Well, we want to see what in the world that bone head was relying on.” Basically, that’s what they’re saying.

Farron Cousins: Yeah. See, I wrote about this the day after he went on CNBC, which was last year, back in 2017.

Farron Cousins: He went out there and he said, “Listen. I can’t tell you everything that we have but, I will say the science is not settled on this. We do have documentation that clearly disputes that human beings are in any way involved in climate change.” And the next day, this group, PEER, says, “Well, that sounds fascinating, Mr. Pruitt. Can we see those documents too?” And at the time, obviously, he said, “No, no, no, no, no. These are my super secret EPA documents.” And so they had to file the FOIA request and here we are a year later, because they’ve been fighting it tooth and nail, and a judge finally rules on this and says, listen if you allegedly have this science, these papers, that would really blow the lid off the whole climate change thing … if you have proof otherwise, tell us so we can start addressing this.

Mike Papantonio: So, here’s the ending to this. A, he doesn’t have proof.

Farron Cousins: No, he doesn’t.

Mike Papantonio: Clearly he was lying. Again. B. We seem to, again, look the other way and say, well, this is Scott Pruitt, you know he’s not well balanced, something’s wrong with the guy. We’re going to let this ride. And the Administration does not have the good sense to say enough is enough with this guy. You’re causing us so much problems, we already have problems in this Administration. And now, along comes Scott Pruitt, who seems to be … I mean, he’s some type of serial liar.

By the way, how about the story where he’s talking about … There’s so many stories about Scott Pruitt but, the one that hits me is one I think we covered last week where we find out that he’s being rented this condominium in Washington, D.C. that’s worth a lot of money every month, and he ends up … What’s he paying for it?

Mike Papantonio: $50 dollars a night in this condominium. Now, why is that important? Because the people who gave him the condominium are a lobbyist group who have gone to him and asked for favors. And at this point, he seems to think, “Well, I don’t have to explain all this.” He says, “Well, it’s just old friends helping old friends.” Isn’t that basically his explanation?

Farron Cousins: That’s exactly his explanation. And you know, last week everybody’s talking about … ’cause you know, Scott Pruitt, he had the pen scandal, ’cause he’s spending hundreds of dollars on each individual pen.

Mike Papantonio: Talk about it. Some people may not know about this.

Farron Cousins: He got popped spending … I think the cheapest pen was about $120 dollars. For a pen. Some over $200.

Mike Papantonio: And I’m sure we’re going to find women’s shoes, the same way. He has a fetish for women’s … This guy’s a nut.

Farron Cousins: And then we find out he uses a staffer on the taxpayers dime, to go look at buying a used hotel mattress for God, I can’t even imagine why any human would want to buy a hotel mattress. Then he had the staffer, again, and this is illegal, you cannot have your staff doing …

Farron Cousins: And try to find information, so my wife can buy or run or start a Chic-fil-A franchise. And while all this is happening, ’cause that’s what the media’s talking about, Scott Pruitt, he’s ridiculous, he’s breaking the law, which is true.

Farron Cousins: Two major regulations last week, he worked on repealing and put that in motion. One has to do with air pollution standards, which means …

Mike Papantonio: But we’ve covered those.

Farron Cousins: Right, we have. And the second one, we talked about last week as well, was this chemical safety thing. We’re not going to make people go through chemical safety training so you can poison yourself.

Mike Papantonio: Okay. What’s the flaw? The flaw is we have a corporate media that sees shiny things. Now, this is an important part of the story because right now, if you’re watching this you’re watching YouTube TV. Okay, that is the new trend. I mean corporate media is on its dying leg and here’s why. They cut any kind of money that would go towards real journalism, they’ve cut it. You just can’t get it. Well, let’s cut the news department, it’s not making us money. Yes, we have this passive agreement with the public, that we have this right to broadcast because we’re going to bring you news. There is no more news. You got reporters that are doing their damnedest to tell stories but they’re told not to tell stories because advertisers don’t let them tell the stories. That’s why you don’t see the stories, some of the things we’re reporting right now.

You don’t see things about Nestle and Bayer and you don’t see that stuff because those are huge advertisers. That’s another problem corporate media has but the biggest problem that they have at this point is they simply don’t have a sustainable kind of reputation. Right now, you’ve got millennials that don’t even watch corporate media.

Mike Papantonio: They watch skinny bundles, you know, they’ll watch exactly what they want to watch. They don’t watch the nightly news. They don’t know what’s on the nightly news, they find their news on places just like this. This is where they’re going to get their news. That’s the trend. It’s really interesting, Cenk Uygur, who’s a dear friend of mine, has been for many years, all the way back to the Air America days, started the Young Turks and, actually we’re part of that Young Turks program that shows up on YouTube TV. That is the way that you get stories and your point about Scott Pruitt, proves exactly that. It’s the only way you can get news because the media is out looking for shiny things and because of that, you’re going to get you’re better stories out of things like Alternate, Ring of Fire, The Young Turks. You’re going to find places like that, that you have to go to get the news.

Farron Cousins: Well, and it’s also because the corporate media has forgotten how to properly tell a story to the people in this country. Because when you talk about something, air pollution for example, or the water bottle issue we were talking about earlier about the particulates and the micro plastic, people hear those terms and they tune out and that’s the public’s fault, not the media’s but, the media doesn’t know how to maybe jazz it up a little bit because sometimes you do have to smack people over the head with a headline that says corporate America is poisoning you. Nestle is the culprit.

Farron Cousins: Things like that are going to get people’s attention and yeah, you do have to do that sometimes so that people understand that, yes, this is an issue that does affect all of us. Monsanto’s Round Up, you may not be a farmer, you may not go to the store and buy it for your own yard, but, guess what, it’s in the Cheerio’s you just ate but, MSNBC can’t tell you because …

Farron Cousins: Right, because Cheerios are coming up during this commercial break but …

Mike Papantonio: Interesting thing I’ve seen developing may even see it on this show, where if we’re talking about Monsanto, Monsanto will come up with an advertisement right before we talk about Monsanto. So, at any rate, at least you’re hearing news that you really won’t hear anywhere else because, truthfully, as Cenk has always said, corporate media is dead. They are absolutely dead. And all you have to do is follow the nightly news and you’ll kind of start understanding that.