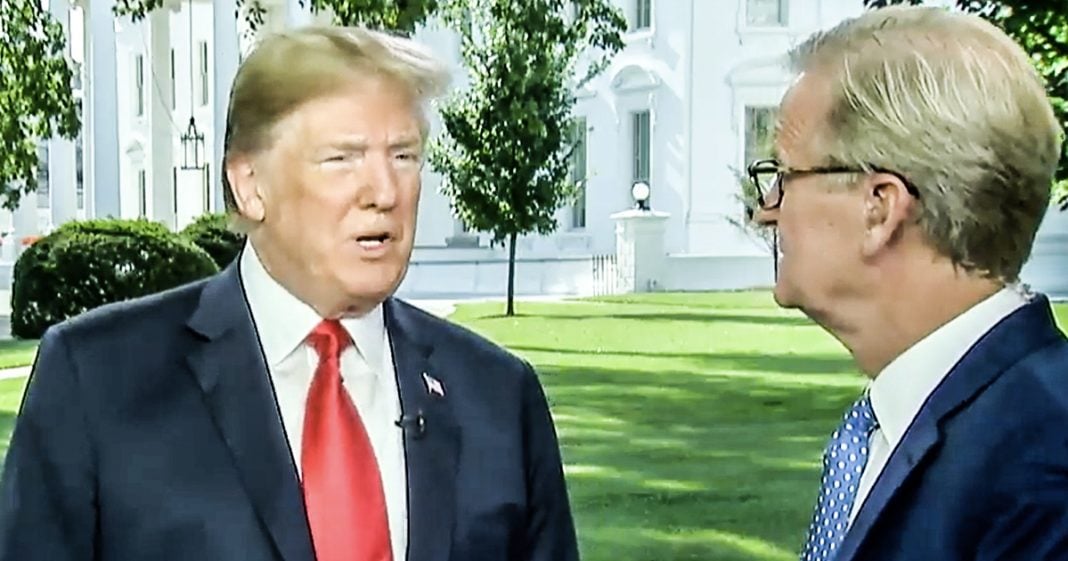 On Friday morning’s Fox & Friends, Donald Trump had some more praise to heap onto North Korean dictator Kim Jong-un, but he also mentioned that he would like “his people” to treat him like Kim’s people treat their leader. Trump wants to be a dictator, make no mistake about it, so let’s drop the whole farce of Trump meeting with Kim to stop a nuclear war – that’s not what this meeting was about. Ring of Fire’s Farron Cousins discusses this.

On Friday morning Fox & Friends decided to broadcast their show live from the White House lawn, and while they were on the air Donald Trump tweeted out that they were there and that maybe he’s going to pop down and do a quick little interview. He did. He did go down. He did do the interview and he said quite possibly one of the worst things that you could ever hear an American president say. Take a look.

Steve Doocy: Are we close to seeing Mr. Kim here at the White House?

Donald Trump: It could happen. I mean …

Steve Doocy: You talked about that yesterday …

Donald Trump: Yeah, I would have him. Yeah, I think it’s something that could happen, yeah. Hey, he’s the head of a county, and I mean he is the strong head. Don’t let anyone think anything different. He speaks and his people sit up at attention. I want my people to do the same.

But Donald Trump just laid all his cards on the table right there. He basically just told us that he wants to be a dictator. He wants to be respected as one. He wants people to cower in fear in front of him and that’s how he wants to run this country.

So please, for the fifth time this week, can we stop praising Donald Trump for speaking with Kim Jong Un for allegedly averting this nuclear war that he himself was threatening to unleash? I mean, he created the problem and then he pretends to solve it.

He did not go to Singapore to get North Korea to denuclearize. He went to North … Excuse me, Singapore to talk with Kim Jong Un about real estate deals and basically to get a roadmap on how to be a dictator back here in the United States. Since he has come home he had admitted to Fox & Friends just this morning that he likes the way people obey Kim Jong Un and he wants his people to do the same. He has attacked the press as the greatest threat to American democracy.

What more proof do you need that Donald Trump wants to be what these other men are? He wants to be a Kim Jong Un or a Vladimir Putin. He wants to be somebody who knows that he can hold this position of power for the rest of his life and there is not a damn thing anyone else can do about it. This summit wasn’t about peace. It wasn’t about denuclearization. It was about Donald Trump learning how to become a dictator here in the United States.