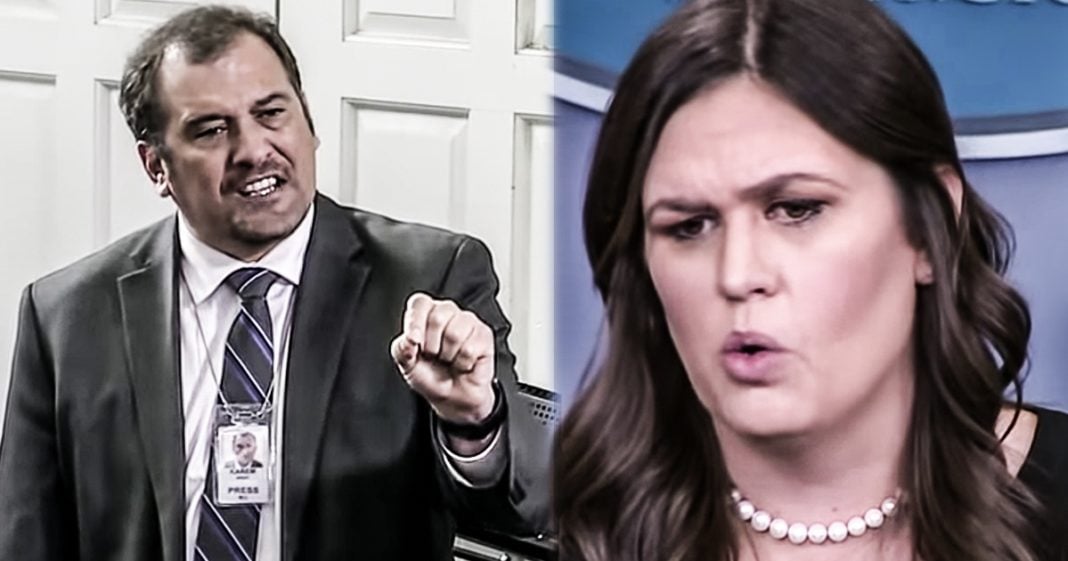 The Trump administration gave some pretty crazy explanations for their horrible immigration policies yesterday, and Playboy White House correspondent Brian Karem channeled the anger of every American citizen during Thursday’s press briefing to let Sarah Huckabee Sanders know that she is being absolutely inhumane in both her defense of these policies and her refusal to acknowledge that these are human beings. Ring of Fire’s Farron Cousins discusses this.

At Thursday’s White House press briefing, Sarah Huckabee Sanders really had, quite possibly, one of the worst days that she has ever had as Press Secretary here for the United States. First and foremost, actually, one of the things she did was say that she was praying for clarity when asked about the reports that CBS had the day before saying, she was going to quit by the end of the year, a claim she that vehemently denied, and now she says she’s actually praying for clarity. We know she actually lied in that tweet, just one to add to the pile.

But the most important thing that happened yesterday was a reporter from Playboy, their White House correspondent erupted at Huckabee Sanders in a way that every other reporter in that room should have been doing for months. Take a look.

Sarah Sanders: That’s been this administration’s policy since the day we got here.

Reporter: No. Jeff Sessions made a decision in April that he was going to move from handling it as a civil matter to a criminal.

Sarah Sanders: Our administration has the same policy since we started on day one that we were going to enforce the law. I know it was something that wasn’t high on the priority list in the previous administration, but it is on ours. We’re a country of law and order and we’re enforcing the law and protecting our borders. We would like to fix these loopholes and if Democrats want to get serious about it instead of playing political games, they’re welcome to come here and sit down with the president and actually do something about it. Jill.

Brian: Don’t you have any empathy?

Brian: Come on Sarah. You’re a parent. Don’t you have any empathy for what these people are going through? They have less than you do.

Sarah Sanders: I’m trying to be serious but I’m not going to have you yell out of turn. Jill.

Brian: They’re telling us it’s a law and they have, these people have nothing. They come here with nothing.

Sarah Sanders: Brian, I know you want to get some more TV time.

Brian: It’s not that.

Sarah Sanders: That’s not what this is about.

Brian: It’s not about that.

Sarah Sanders: If I want to recognize you.

Brian: Honestly answer the question. It’s a serious question. These people have nothing. They come to the border with nothing, and you throw children in cages. You’re a parent. You’re a parent of young children. Don’t you have any empathy for what they grow through?

Now obviously this reporter is upset rightfully so about the fact that this administration enacted the policy to rip immigrant children from their parents, and house them in separate detention facilities. Every reporter in that room should have that same kind of visceral reaction to Huckabee Sanders and the rest of this administration, defending this policy. Even worse, as Huckabee Sanders also did during the press conference, defending these policies by trying to use the bible as some kind of justification. In fact, Jeff Sessions, Attorney General did the same thing earlier in the day, except for the fact that the quote he used was the same one that was used in Germany to justify locking up all the Jewish citizens and sending them to their death. It also happens to be one that was actually in support of slavery.

But Sarah Huckabee Sanders didn’t know that because she doesn’t know very much at all. So she used the same thing to defend this disgusting policy. But what that reporter did there was point out to everybody in that room how to do it. Sarah Huckabee Sanders needs that kind of reality check during these press conferences. I mean, she insulted Jim Acosta during that same press briefing, which if you get the chance, you need to watch the entire press briefing from Thursday because it’s absolutely abysmal. But she told Jim Acosta that he can’t read big sentences.

I mean, come on people. Stop being nice to her. Stop playing along. Stop asking questions and when she doesn’t answer just huff and oh, she didn’t answer. Stand up. Get loud if you have to. What’s the worst that’s going to happen? They’re going to escort you out of a meeting where everybody’s doing nothing but lying to you. Oh well. Deal with it. This woman is pure evil. A lying sack of crap, up there at that podium every day, insulting you and telling you things that aren’t true. Anyone who doesn’t repeat what this Playboy White House reporter did yesterday, that doesn’t stand up and get angry on behalf of everyone in this country, and confront her over both her lies and her complete lack of empathy, then you deserve every lie and every insult that Huckabee Sanders lobs at you.