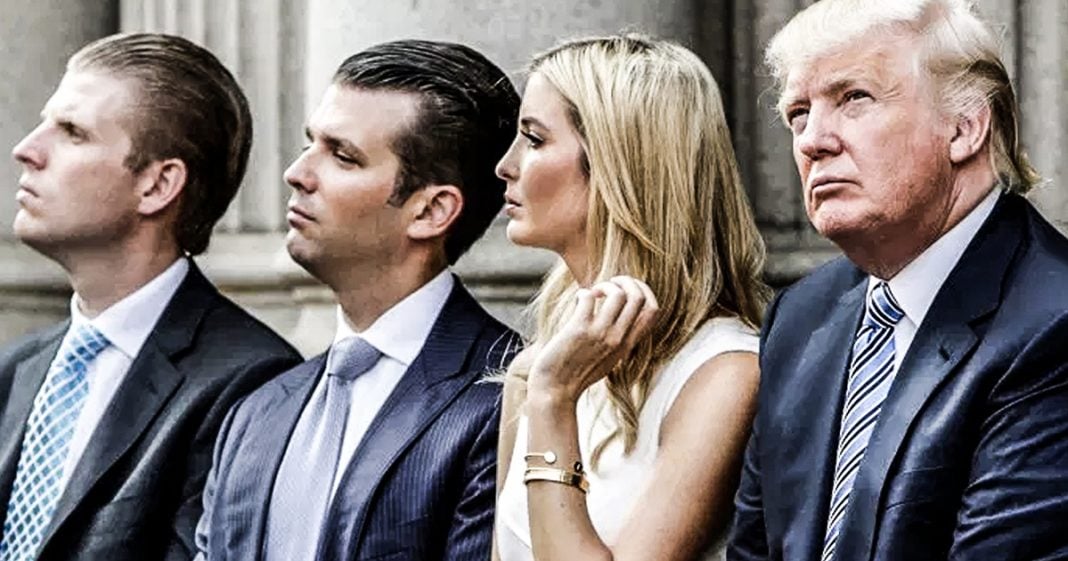 The entire Trump family has been named in a lawsuit regarding charitable fraud by New York Attorney General Barbara Underwood for allegedly using The Trump Foundation as both their personal piggy bank as well as a campaign tool to fool voters. Both of these activities are illegal, and since this is a state crime, Trump wouldn’t be able to pardon himself or any of his family members should a conviction take place. Ring of Fire’s Farron Cousins discusses this.

The newly empowered Attorney General of the state of New York, Barbara Underwood, filed a suit yesterday, on Donald Trump’s 72nd birthday, against Donald Trump and his children for the potentially illegal use of their charity in order to both enrich themselves and to aid their father’s campaign. And I say newly empowered because Barbara Underwood is the woman who took over after Schneiderman was revealed to be quite the scumbag and Underwood came in, undertaking a massive task, and not only has she succeeded in it, but she has far outpaced and excelled her predecessors in this job in what she was handed and what she is able to do. This is a phenomenal woman doing phenomenal work out there.

So, this lawsuit though, pretty complicated but let’s try to strip it down to the most bare points of it. The lawsuit charges that Trump, and members of the Trump family, used the Trump Foundation in order to bolster his political standing during the 2016 election. Specifically, and they actually tweeted out emails that prove this from Corey Lewandowski, they wanted the Foundation to make payments before Donald Trump would go and speak to certain groups. If he was going to be talking to a bunch of veterans, Lewandowski would email and say, “Hey, go make a donation to a veteran’s foundation ’cause it’s really going to help him with this crowd.” Now, that’s part of it. That is illegal, the FEC has been alerted that they need to look into this by Underwood.

The second part of it is that Trump, and members of his family, were using this charity as their own personal piggy bank. As Underwood says, “As basically their own checkbook to do whatever they wanted to without having to give the money over to the actual charities they were raising monies for”, also illegal. She has asked other investigative bodies to help look into this as well. But, here’s what’s really interesting about this, if this case does proceed, because they’re seeking about $2.8 million in restitution on this, it’s likely something Trump might settle very quickly, just to get it to disappear because this is a very big deal.

If any member of the Trump family, or Trump himself, or any of his little underlings that were involved, like Lewandowski, if they get convicted or even indicted or arrested for this, Trump can’t pardon them. These are state crimes, not federal crimes. They’re not crimes against the United States, itself, therefore, a presidential pardon cannot apply. That’s what’s so important about this. That’s what’s so powerful about this and that is why it shows that Barbara Underwood is doing the job that the American people need her to be doing.

She is going out there, she built this phenomenal case, with these impressive charges against the Trump family for things that most people had suspected for a very long time and she did it in a way that they can’t weasel themselves out of. That is the kind of brilliance we need to see in Attorney Generals all across this country.