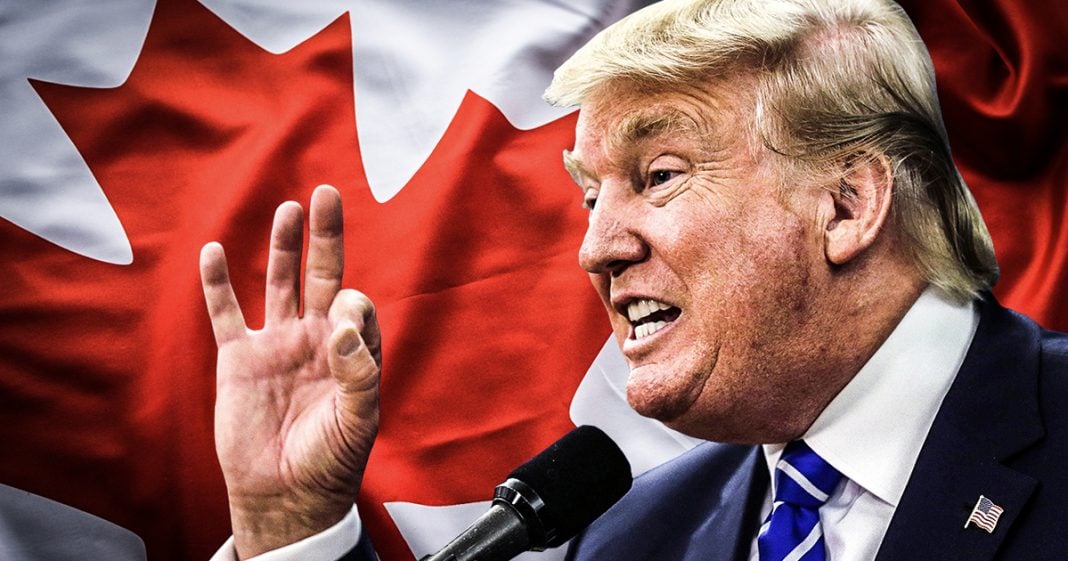 Canadian Foreign Minister Chrystia Freeland has said that her country is open to imposing sanctions on Donald Trump’s businesses in Canada in a retaliatory move for the tariffs that he is putting in place against the country. Apparently Canada has Trump all figured out – if you want to get your way with him, you have to go after his money. Ring of Fire’s Farron Cousins discusses this.

Canadian Foreign Minister, Chrystia Freeland, when talking to reporters recently after Donald Trump left the country, mentioned that one of the things they may be considering, maybe wanting to enact in the country of Canada, is sanctions against the Trump organization in response to the massive tariffs that Donald Trump is trying to put in place against the country. You see, what this tells me is that Canada has Donald Trump 100% figured out. Right? They don’t want tariffs on their goods coming into the United States because it hurts them. We don’t need tariffs on the goods we need to bring in or our goods leaving this country because it hurts us. So Canada found a clever way to get him to stop. They’re going to go after his personal money. Because do you think Donald Trump cares what happens out there in the farmland in this country, that’s already lost over half a billion dollars because of the tariffs in less than a month? No, he doesn’t. That doesn’t affect him one way or the other. He’s not losing any money.

Now, for the record, she has not said that this is what they’re going to do or what they’re planning to do. It is something that, at the moment, is just on the table. And, to be honest, I don’t think they’re actually going to put any sanctions on the Trump organization but I think they’re out there saying this because it’s a shot across the bow. They understand that even the mere appearance, you know, the threat that Donald Trump could lose money could be enough to get him to lift these disastrous sanctions so that we’re not hit with retaliatory sanctions. This trade war started by the President is being opposed by damn near everybody you can imagine: Republicans, Democrats, trade organizations, businesses, every other country that’s involved in it, foreign governments, people here in the United States. Everybody knows it’s a bad idea except Donald Trump. And luckily, we have good friends in Canada who know exactly how to fight back against Donald Trump.