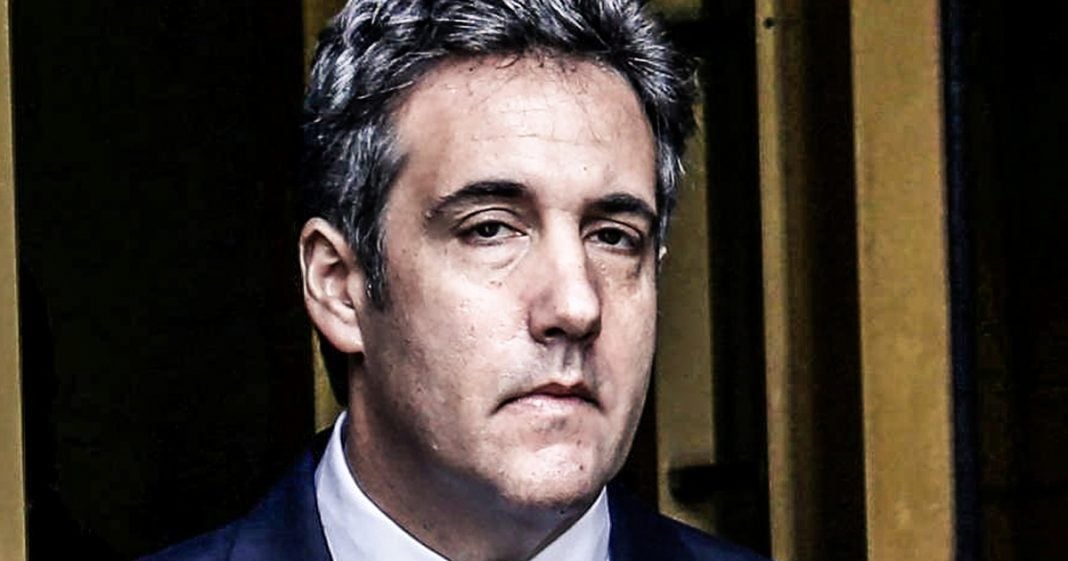 Michael Cohen, the embattled former lawyer of Donald Trump, may have no other option than to flip on Trump. This week, it was announced that his current legal team would be leaving his case after they failed to adequately go through documents and basically sunk his entire defense. Cohen is out of options, Trump is eerily silent, and Ring of Fire’s Farron Cousins explains what this could all mean.

Donald Trump’s former lawyer, Michael Cohen, is having a really bad week and actually, as this week continues, it’s probably going to get much, much worse. But we found out on Wednesday of this week that not only is Michael Cohen losing his legal counsel, they have decided they are not going to represent him going forward in his case, but also reports are saying that Michael Cohen at this point really has no other option other than to flip on Donald Trump. To turn over evidence, whatever he may have, somehow make some kind of deal with prosecutors so that he doesn’t spend most of the rest of his life in prison.

So first things first, the legal counsel. This is the legal counsel that was in charge of going through those 3.7 million documents and other forms of communication that had been confiscated from Michael Cohen’s office, his hotel, everywhere else. They were supposed to go through those and they had ’til tomorrow, Friday the 15th, to determine which of those 3.7 million were absolutely confidential, attorney client privilege, cannot be released to the public, cannot be used in the trial, and which ones were okay to use. They’ve only gone through a couple hundred thousand at this point, and they’ve got about 24 hours left to go through several million. So it’s not surprising that this law firm would want to drop him. They failed him. I mean, when you’re looking at it just by the letter of the law, the duty that a lawyer has, they have absolutely failed Michael Cohen, which means through their failure, more of these documents, including some that probably shouldn’t be released, are going to be released. That is going to destroy Michael Cohen’s defense. It’s going to destroy every legal argument he has. And it has the potential to destroy the careers of people like Donald Trump and Sean Hannity, which trust me, would be phenomenal if it actually happens.

But this law firm now says, “Yeah. We’re going to go. Good luck with the rest of these documents. See you in court on Friday.” And now Cohen is out there shopping for a new legal team, but at this point it’s going to be really hard to come by ’cause not only is he running out of money, he’s running out of time. But the damage is already done. And that is why the best hope that Micheal Cohen has to keep himself out of prison for a very long time, he still probably, given what we know so far, going to spend some time in jail. I think at this point that’s completely unavoidable for him. But he can avoid a longer sentence by turning over information. And who do you think the prosecutors are going to want to go after, ’cause remember Cohen really only had three clients during this time period, Elliot Broidy, Sean Hannity, and Donald Trump. You think these prosecutors give a damn about Broidy or Hannity? I mean, they should, but in reality, they’re probably after the bigger fish here.

So that’s a really interesting development in this story as well. Bottom line is that Cohen’s got no options. Most of the rest of your life in your prison or turn over all the evidence you have on Donald Trump. I think any respectable, intelligent person at this point would be working on self preservation. You know that Donald Trump would. You know he wouldn’t look out for his buddy and risk going to jail for him. And I have no reason to think that Micheal Cohen won’t do the same.