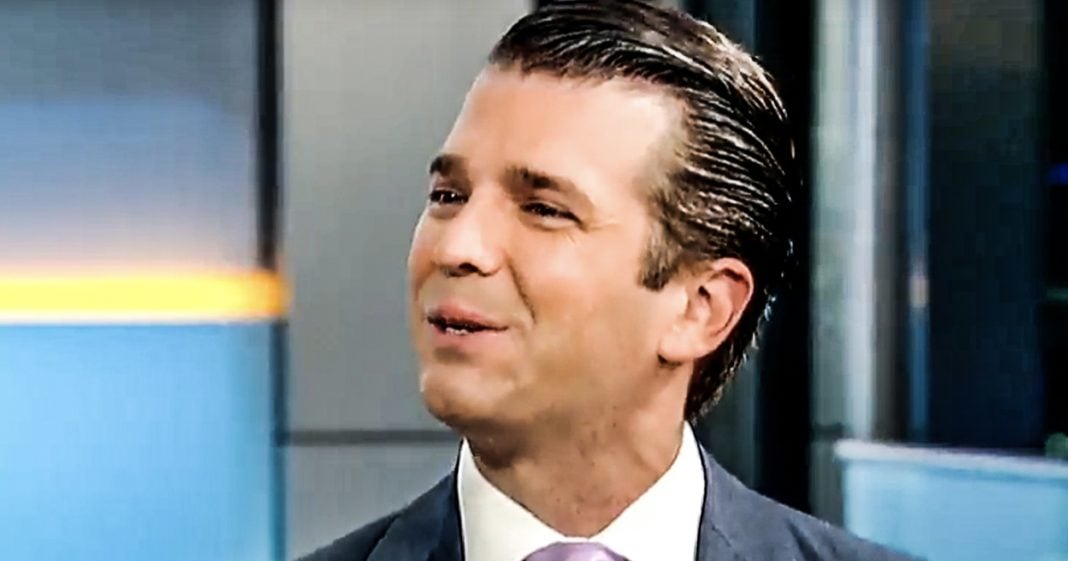 According to Donald Trump, Jr., the reason his father appears to be running a cult is because he might actually be, but that’s a GOOD thing because Republicans like winning. Junior must not have had very good schooling when he was younger, because history tells us that no cults end pleasantly for anyone involved. Ring of Fire’s Farron Cousins discusses this.

Recently, Republican Senator Bob Corker said that Donald Trump, with the Republican party, has become under Donald Trump, is basically a cult. It’s cult-like mentality. They’re very cultish. So, Donald Trump Jr. went on Fox and Friends where they asked him about Corker’s statement. Trump Jr., instead of outright saying, “No. Absolutely not. This is not a cult in any way possible.” This is what his response was.

Fox Host:
I just want you to hear what Bob Corker said yesterday, who’s up for secretary of state, up for running mate, at times been a critic of the president, here he is calling out what he told me was leadership, yesterday, in saying this.

Bob Corker:
We’re in a strange place. I mean, it’s becoming a cultish thing. It’s not a good place for any party to end up with a cult-like situation as it relates to a president that happens to be purportedly of the same party.

Fox Host:
He says, because leadership doesn’t buck the president, they’re a cult.

Donald T. Jr.:
Listen, I think that’s ridiculous. I think, you know what? If it’s a cult, it’s because they like what my father’s doing. You see real Americans actually winning for a change, conservatives actually getting things done. I saw this. I saw this during DACA, when Schumer folder initially. I had multiple congressmen call me, “Don, what just happened?” I go, “What do you mean?” “What just happened, Don?” I go, “Well, we won.” I quote, “We don’t win. We give up,” because the other side calls us a name, they do this. I think Americans … I addressed this yesterday on my Twitter to Corker. Americans want to see someone who’s actually going to have conviction, not just talk about it with great soundbites. Then, when it comes game time, they sit there and fold. They want someone who’s going to be like my father and fight and actually want to win. How about actually want to win election?

So, let’s focus on one part of that little video, where he says, “If it’s a cult, it’s because they like what my dad is doing.” Isn’t that what a cult is, where you blindly follow somebody because they make you lofty promises or you like what they’re doing, you like what they have to say? I have a news flash, here, for Donald Trump Jr., go back and study world history, last 100, 150, years. There really has never been a cult that has ended well for anyone. Look back and perhaps read the book The True Believer: Inside The Nature of Mass Movements. It’s a phenomenal book. It helps explain why people are so easily duped and they develop this cult like mentality towards people like Donald Trump, because that is exactly what this is.

In their eyes, their cult leader, Donald Trump, can do no wrong. Everything he does is glorious, spectacular, better than anyone ever, and it’s always the right thing. That’s not a normal way of thinking. Trump Jr. just went on Fox and Friends and admitted that, yeah, maybe it is a cult, because everybody likes what he is doing here.

This is dangerous for the United States. It’s dangerous for Fox and Friends to have somebody as stupid as Donald Trump Jr. come on that couch and try to wax intellectual about the subjects of the day. This kid doesn’t know a damn thing about American politics. He barely knows anything about business, and he doesn’t know anything about psychological manipulation, which is what is happening with our public today. It’s all happening under Donald Trump, and he and his family happen to think that this is the greatest thing in the world. They don’t even realize what they’re doing to this country. More importantly, the irreversible damage that they have inflicted on the Republican Party.