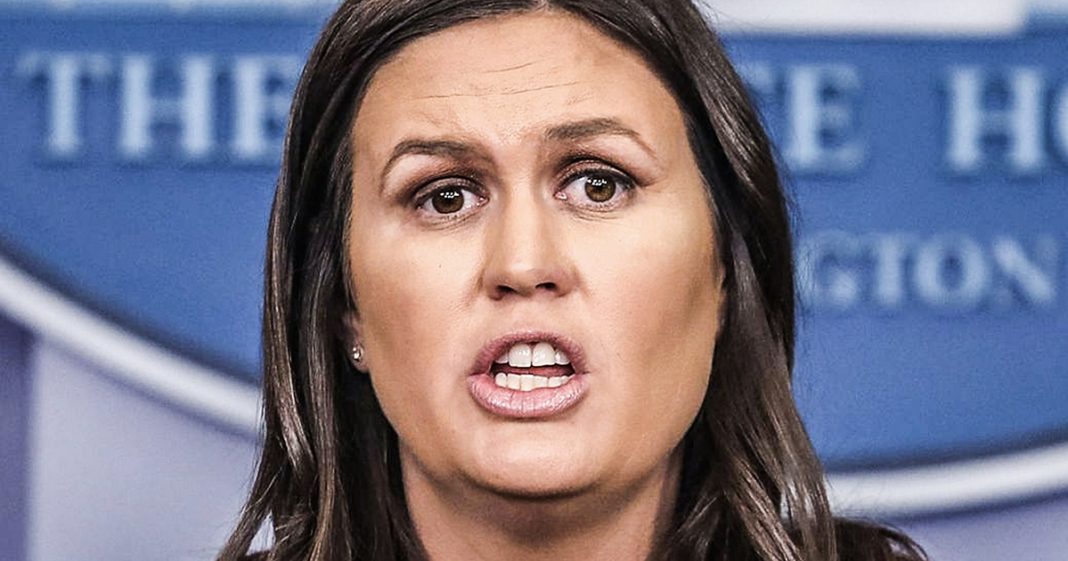 According to a new CBS report, both Sarah Huckabee Sanders and Raj Shah are planning on quitting their jobs at the White House before the end of the year. But according to Sanders herself, nothing could be further from the truth. While the denial from Sanders seems plausible, her history of lies makes it hard to believe anything she says, as Ring of Fire’s Farron Cousins explains.

According to a CBS report that came out Wednesday evening, both Sarah Huckabee Sanders and Deputy Press Secretary Raj Shah are planning on leaving the White House by the end of this year.

Now, according to the report, they reached out numerous times to both Huckabee Sanders and Shah and never once got a response from either one of them, including a last minute effort to contact them before they published this story. But then immediately after the story came out, Sarah Huckabee Sanders tweeted the following:

“Does CBS News know something I don’t about my plans and my future? I was at my daughter’s year end kindergarten event and they ran a story about my plans to leave the White House without even talking to me. I love my job and am honored to work for POTUS.”

Here’s the thing, though: They did try to contact you several times, even right before they published it, and you refused to give them an answer. And I have a theory about why Sarah Huckabee Sanders and Raj Shah refuse to give them an answer. Because that way, they could go ahead, run the story, then whatever they had to say … Huckabee Sanders, Shah, whoever it is … Had the clearance to come out and say “I never once spoke to them. They didn’t ask me this question.” It’s all a ruse to misdirect the public.

But the issue at hand is whether or not Sarah Huckabee Sanders is actually going to be quitting the White House by the end of this year. I would like to think that she is. I would like for her to quit. She has been horrible. She lies constantly to the American public, and that’s not the kind of person we want in the White House.

The flip side of that is that obviously we’re not going to get anyone better than Sarah Huckabee Sanders, so whoever comes in is either going to be on her level, or much, much worse than she actually is.

But here’s the overall thing. CBS spoke to friends of Sarah Huckabee Sanders, who claimed that she has told them this. They spoke to people inside the White House who say that this is true, along with other people who are close to the administration. Given Huckabee Sanders’s history of lying, as she did in her tweeted response to the story, I’m going to err on the side and say that CBS is probably a lot more trustworthy than Sarah Huckabee Sanders.

So what would this mean if Sarah Huckabee Sanders left? Again, it’s going to mean we’re going to get somebody just as bad as her as our press secretary, but it also shows that this White House is still in complete chaos 17, 18 months after it began. They have had more turnover in these first 18 months than any other administration has at least in modern history, possibly going as far back to the 1800s.

This is not how any administration should operate. Think of it this way. If you were working at a corporation and you kept seeing the management, the high level officials quitting, resigning, getting fired, wouldn’t you think that there was something wrong with that company? Would you the shareholders think that something was wrong? Yes, they would, and that’s actually what Kathryn Tenpas from Brookings Institute pointed out in this CBS report. If this were happening at a private company, people would automatically assume that the leadership is bad, that nobody there knows what they’re doing, and that the company was going to eventually tank. And that is exactly what we’re seeing with the White House.

In just the last few months, here are some of the people who have left this administration: Hope Hicks; Josh Raffel; Tom Bossert; Michael Anton; John McEntee; Cliff Sims; Steven Cheung; [Kaylen Dord 00:03:48]; Natalie Strom; Tyler Ross; and possibly, by the end of this year, we may be adding both Raj Shah and Sarah Huckabee Sanders to this list that is only going to grow in the meantime.