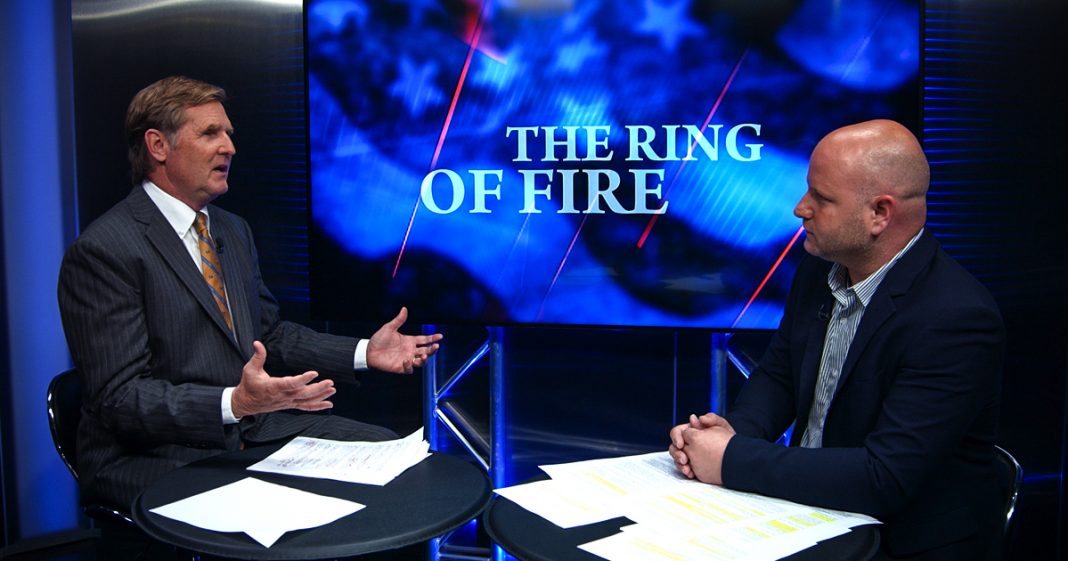 Drug giant Pfizer has been fined $24 million dollars in a Medicare fraud kickback scheme – a tiny amount for the multi-billion dollar company. Ring of Fire’s Mike Papantonio and Farron Cousins discuss this.

Mike Papantonio: I’m Mike Papantonio back with Farron Cousins on Ring of Fire. Farron of course is the editor of the National Trial Lawyer magazine. Drug giant Pfizer has been fined another $24 million in a Medicare fraud kickback scheme. It’s a tiny amount for, it’s really a tiny amount for a multi-billion dollar corporation, especially in light of the fact that it happens so routinely with this company.

At some point, you go, okay, you’ve been fined a billion dollars, you’ve been fined $300 million. You’ve been fined $500 million. Whatever it is. Pfizer if you list the companies, okay, top of the list of course is Bayer, Johnson and Johnson, Merck, Pfizer. It’s like the same five or six companies that for some reason we won’t put them in handcuffs. We just refuse to put them in handcuffs. This is nothing short of theft, okay? They started the … What they do is they start these foundations. Foundation to improve your kidneys or foundation for kidney disease or foundation for heart disease, and then they get those foundations to run a kickback program through their foundation.

Farron Cousins: Yeah because it’s illegal for any drug company to actively get Medicare to try to prescribe their medication. They set up these foundations, and then the foundation, their job is to work with Medicare and work with doctors to, in this instance, only prescribe Pfizer medications for this group of patients with, whether it’s kidney, whether it’s liver. Whatever it is, you’re only going to work with Pfizer. Technically if this were an independent institution, charitable institution, that would be perfectly legal, and that’s also part of the problem here.

Mike Papantonio: Right. Yeah, it is. It is.

Farron Cousins: Because it was a front group for Pfizer and they were funneling money back through, Medicare patients get ripped off. The taxpayers who fund Medicare, we get ripped off.

Mike Papantonio: Because, here’s why they get ripped off. Because it’s a kickback scheme. It removes competitiveness when they’re going after a drug that will create the same kind of relief for the patient, you see. That’s really where the … In other words, you may have a Pfizer drug and they give a kickback to the foundation and the patient, but even with that kickback, you could buy a cheaper drug that does the same thing. You could buy a generic drug that does the same thing.

These companies, this whole new foundation scheme is huge right now. You know, you got, there’s a foundation virtually for everything and this goes on very, very often. Most of the time, it’s a foundation that’s … They need the money. These foundations really try to do good work. I mean they really try to get out there and do good work, but they got to have the money. These corporate pigs say, “Well we’re only going to give you the money if you do what we want you to do.” That’s what happens, and there’s nothing benevolent about it. It’s all about can we increase our cash? Can we increase the money flow here?

Farron Cousins: $24 million is such, that is nothing. They don’t even notice that $24 million is gone when they have to pay that out because they’ve made hundreds of millions from Medicare and from taxpayers, because again, we’re the ones who pay for that, and there could very easily be a different generic available to this patient.

Farron Cousins: But because the doctor can easily write on there no generic substitutes or Medicare can say we’re not going to cover generics. We cover only what the script is written for.

Mike Papantonio: Or inappropriate rules. Inappropriate generic. There’s all kinds of things they can get away with.

Mike Papantonio: But it’s a cheaper drug. It does the same thing. Pfizer here had it, oh no. We’re going to give kickbacks so they have to use our drug and that charges more money to Medicare, in effect to taxpayers. This goes on all the time, and the problem is, I don’t know what it takes for the DOJ and for leadership, I mean for the White House sorry. I thought our best hope was Obama, that he was going to understand that we don’t change culture. You can’t change a cultural train wreck that we have here with these big corporations. You don’t change the way they think by making them pay money.

You change the way they think by putting them in prison, and then years later, somebody’s in MBA school and they use this case, they use the story behind this case to teach a class, and they say, “Yeah, half a dozen people actually went to prison for doing this. Don’t do this.” But we’re unwilling to do that. We want culture to, this criminal culture that exists, especially in the pharmaceutical industry, we want that criminal culture to exist the same way it exists on Wall Street, that criminal culture. So what we do is we perpetuate because we don’t have a Department of Justice that has enough guts to do their job.

Farron Cousins: Part of the reason for that is because we end up with these attorney generals like we had under Obama, under Bush, under Clinton, who represented these people and they think, when they get appointed, Obama thought, well Eric Holder knows those guys so he knows how the business works, so he’ll be able to hold them accountable, but that’s never how it works. They always come back to their defense and then you end up with somebody like Jeff Sessions who has no business whatsoever being an attorney general, so he doesn’t even know what he’s doing. If we had somebody that came from a plaintiff’s law firm, that spent their career representing the victims of any of these corporations, Wall Street, Big Pharma, Big Oil, Big Tobacco, any of them, somebody like that as Attorney General, we’d get some changes.

Mike Papantonio: Police officers in Illinois, they’re warning that if the state legalizes marijuana, they’re going to have to kill all of their police dogs. They really said that. Okay. Let’s take a look at this. We have plenty of states, 10 states where we have legalized marijuana. I have heard no stories where they’ve been having to go murder police dogs. You know, it’s such a, but you see this is, what we ran into in Florida … In full disclosure, I’m in that business. I’m in the medical marijuana business. I own one of the distributors here in the state of Florida. I want to put that out there, just so, my bias is really here because I saw the pharmaceutical industry do everything they could to prevent medical marijuana from taking place in the state of Florida. Same kind of thing here, right? Don’t you know that’s who’s behind this crazy thing?

Farron Cousins: It is absolutely. We have seen, well we’ve also seen the beer industry, the tobacco industry. They’re all trying to fight legalizing marijuana and legalizing medical marijuana and now this is the most extreme of saying, well, Illinois voters, if you pass this and legalize it, we’re going to shoot this dog. Like that old National Lampoon magazine cover. By this magazine or we’ll shoot your dog.

Mike Papantonio: I will shoot …

Farron Cousins: That is exactly what they’re using here. That’s their argument.

Mike Papantonio: Real quickly. The sheriff is Sheriff Buffett, who by the way, is the son of the billionaire Warren Buffett and he’s the guy, that he’s buying all these things for the sheriff’s department. He wants to build the sheriff’s SWAT team and the big drug SWAT team. This is going to interfere with that. I’m Mike Papantonio here with Farron Cousins. You’re watching Ring of Fire and we’ll be right back.