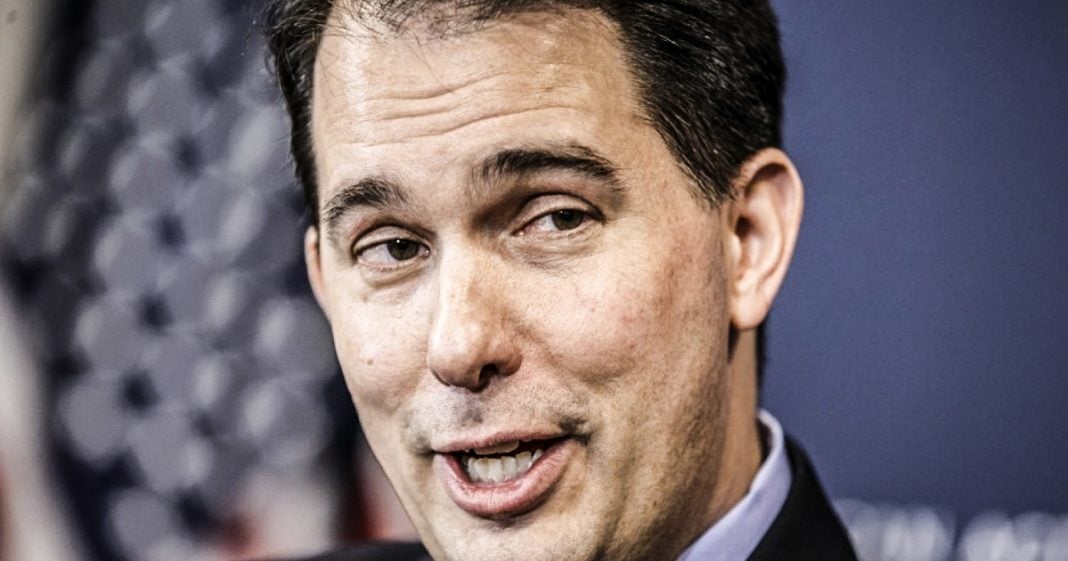 Republican Wisconsin governor Scott Walker worked tirelessly to cancel a special election for vacated seats in the state legislature, and after three separate courts ordered him to hold the elections, Democrats prevailed. The seat in a district that Trump won by 17 points – a seat that had previously been held by a Republican – is now in the hands of a Democrat, the 43rd state legislature seat that has flipped from Red to Blue since Trump took office. Ring of Fire’s Farron Cousins discusses this.

For months, Wisconsin Governor Scott Walker had been trying to not have the special elections that his state required, to fill two vacant state legislature seats. Now both those seats had previously been held by Republicans. One of them left, the other was promoted into Scott Walker’s administration. So Scott Walker didn’t want to have these special elections because he was afraid Democrats were going to take those seats. And he had good reason to be afraid.

On Tuesday of this week, Democrat Caleb Frostman won one of those seats, which was in a district that went for Donald Trump by 17 points. His margin of victory of four points makes it a 21 point flip for that district in voting in a Democrat. And that’s why Scott Walker was terrified of these elections, Republicans won the other seat.

But here’s the thing, three separate courts had already ordered Scott Walker to hold these elections because the man had been trying for months to not have them. And even though these people have to go now run for reelection again this November, they at least get these seats for the time being from June to November. But again, Scott Walker was trying to subvert his state’s Democratic processes. He did not want to hold these elections.

And three separate courts, the first one where the case was initially heard, then two upon appeal told him, “You have to hold these elections. You cannot just cancel the state’s democracy because you’re afraid of losing these seats.” But that is exactly what Scott Walker attempted to do, and it’s something that Republican governors all over this country are actually trying to do.

Alabama passed a resolution not that long ago after the Doug Jones-Roy Moore election that said, “That they’re not going to do special elections anymore. The governor is just going to fill empty seats if they have them.” So Alabama did away with their Democratic processes. Wisconsin tried to do away with theirs, and once they finally had to do it, their worst fears were confirmed.

They understand right now that voters are really angry with the Republican party. They know that they’re not getting raises from those tax cuts. They understand that companies are shipping jobs overseas at an alarming rate, even though Trump and the Republicans promised them those jobs were all going to come back, we weren’t going to see jobs leaving the country, we were going to see jobs coming into the country. And more importantly, they’re losing hundreds of millions of dollars from the tariffs that Donald Trump has already put in place, and other countries have retaliated against the United States, hundreds of millions of dollars.

So when you take areas that have been hit by this, hit hardest by Republican policies, it’s no surprise that these people would end up flipping to Democrats. So far, 43 state legislature seats have flipped from red to blue since Donald Trump took office. That number is going to increase as we continue moving further down the line, and hopefully, it’s going to translate into this blue wave that everyone is predicting could happen this November.

That’s what we need. We need a party in power in D. C., that’s going to put the checks on Donald Trump, that desperately need to be put in place. But as for Scott Walker, as for his attempt to subvert democracy, that not only was shot down by three separate courts, but then the voters decided to stick it to him on Tuesday, as well.