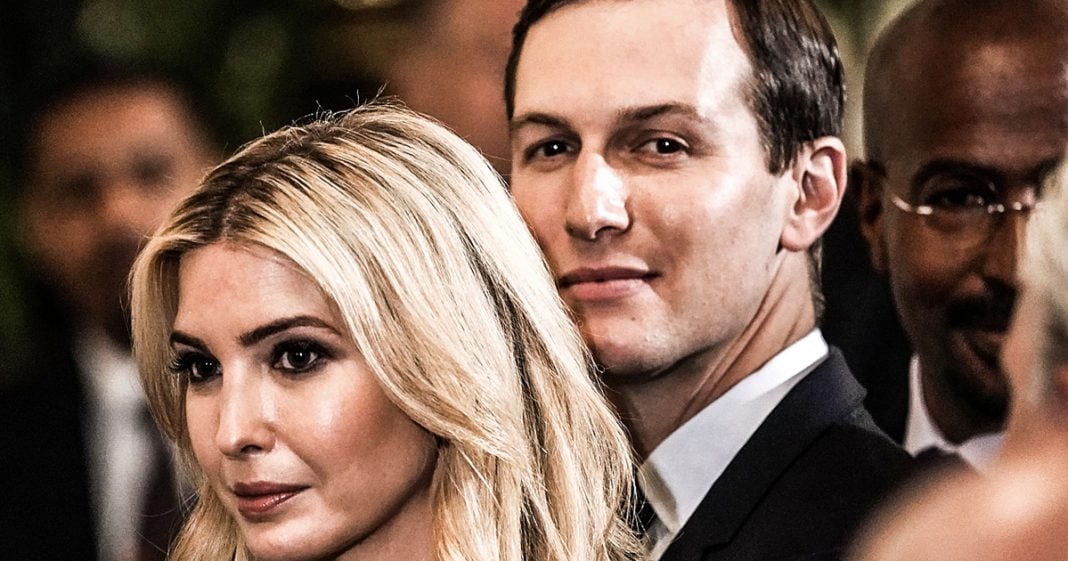 Jared Kushner and Ivanka Trump made a combined $82 million in 2017, according to their recently-released financial disclosure forms. The two masquerade as White House advisers, but what they are really doing is helping to enrich themselves through their lofty political connections. Ring of Fire’s Farron Cousins discusses this.

Jared Kushner and Ivanka Trump, the son-in-law and daughter of the President of the United States respectively, said that going to work in the White House was a big sacrifice. Right? They’re giving up millions upon millions of dollars in profits. They were sacrificing their own companies to go work for Donald Trump as unpaid advisors. They were not going to take a dime of taxpayer money, which, hey that’s great. You don’t need the money. Right?

Well, as it turns out, in the first year and a half of Donald Trump being President of the United States, these two combined, Jared and Ivanka, pulled in $82 million according to financial disclosure reports. $82 million for being unpaid advisors through your businesses that you are still both very much involved in. Now here’s the thing. Back when Jimmy Carter was elected president, the man owned a peanut farm, peanut farm that made a little bit of money. Republicans made him sell it so that he couldn’t somehow use the office of the presidency to profit off his peanut farm.

Jared and Ivanka are both very much involved in their current businesses while also serving within the White House. Ivanka Trump has won, at least, what? 13 new trademarks from China that she is now profiting from. Jared Kushner got massive financial deals from several different people after meeting with them in the White House. They’re using their positions of power within the Trump administration and Trump family to enrich themselves. Yes, this is illegal. But no, nobody’s going to do a damn thing about it. Why? Because nobody ever does a thing about anything illegal that has happened during this administration. And I’m not talking about the collusion, all that crap.

I’m talking about the average, everyday crimes that this administration seems to be committing. Scott Pruitt has broken the law at least four separate times in the last month, at least that’s when they were revealed. Four times, illegal activity, one month, nothing, nothing. Jared and Ivanka, very clear legal violations here, nothing. Donald Trump, emoluments clause, nothing. There is a lawsuit on that. God only knows where it’s going to go. But seriously, folks, every single week we are hearing a new story about somebody in this administration using their office to enrich themselves, or bolster their connections, or abuse the power of their office, and nothing.

Here are just a few of the areas where Jared and Ivanka were making millions of dollars in the last 18 months here. $5 million from Jared Kushner properties in Jersey, $3.9 million for Ivanka from her stake in the Trump International Hotel in DC, where diplomats stay and people like that. They don’t have to, but they do because they want to make Donald Trump happy, and so they all get a profit from that. $5 million for Ivanka from her clothing and accessories lines, which no doubt have seen a boost ever since she became, whatever it is, the unpaid advisor. I think she was actually going to be First Lady at one point. And $2 million to Ivanka from some kind of weird payroll corporation that Donald Trump, the Trump organization, whatever, owns because she was listed as a consultant for the last year.

So right here, and those are just a handful, it goes up to $82 million. We know that Ivanka Trump was at least listed as a consultant while she was also a White House advisor, and that’s not how things work. How much more is it going to take? How much more criminal activity with the evidence is it going to take for someone in this government to stand up and say, “I demand your resignation right now. Not later, now”? Because that’s the point we’re at, if we let this behavior go, if we continue to normalize it, or even just act like it’s not happening, it’s going to get so much worse.

And yeah, we’ve had Democrats calling for investigations, but at this point we don’t even necessarily need them. We need this corrupt jackasses in the federal government to step down immediately before they continue or further destroy these institutions that were once seen as respectable positions of power and influence here in the United States. Today, they’re nothing more than just some positions where Trump and his closest allies can make a quick buck by bolstering their own business and screwing over everybody else.