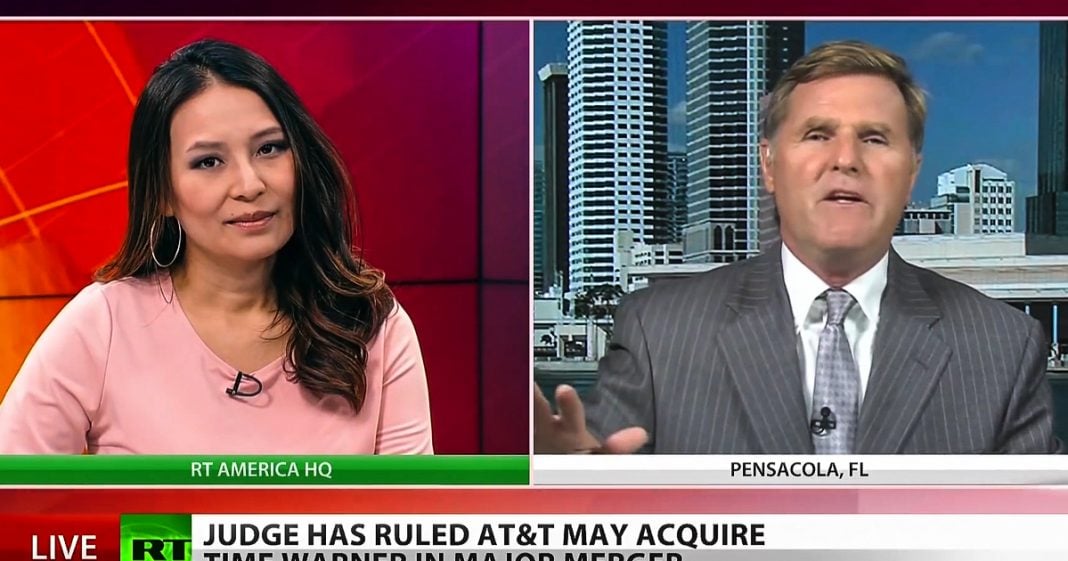 Via RT America: A judge has just ruled that AT&T can acquire Time Warner. The Trump administration opposed the merger while the justice department has sued to block it. The merger unites one of the nation’s largest telecom providers with a media giant. Mike Papantonio, host of America’s Lawyer, breaks down the threat to Americans with RT America’s Manila Chan.

Manila Chan: We’ll go now to Mike Papantonio, host of America’s Lawyer, right here on our team. Mike, great to see you. The AT&T-Time Warner deal has been on the docket since 2016. What is the danger to consumers? Should the DOJ allow this merger to happen? If you can explain anti-trust in a nutshell, if you can.

Mike Papantonio: Well, anti-trust law in the United States is designed to prevent the formation of monopolies that drive out competition, and that’s exactly what this AT&T-Time Warner merger is gonna do. With this merger comes two major threats to Americans. The first and most obvious is it leads to a limited number of viewpoints that are expressed in the media. Now we already had that when Bill Clinton gave us this train wreck that we have right now. This is part of the train wreck, when he signed the Telecommunications Act. So, a limited number of viewpoints is what we live with already. Which then leads to this … and by the way, the only good news is because of this concept of limited viewpoints, is Zucker probably needs to go get another job. That’s the only good thing that comes out of this. They’ve got to get rid of the guys. AT&T has enough sense to know that. But other than that, there’s nothing good that comes out of this. It leads to dumbed down public.

The second issue is that it could lead to a major spike in prices that consumers have to pay when competition is pushed out of the market, and the choice factor is taken out of the equation. But again, the bigger issue isn’t just the dollars and cents of all of it. It’s about the consolidation of media and what that’s done to the American public. Understand, around 1940’s and the ’50’s, then all the way to the 1980’s, there were 80 to 85 independent organizations that owned everything. Now it’s down to four. This potentially could make it even worse than that. This comes out of this brain child that Bill Clinton had. We can’t forget that. We can’t not be historians here. When he signed the Telecommunications Act, he knew exactly what he was doing. He thought that he was gonna be the darling of the media, and in fact, what we’re faced with now.

This is a train wreck. I’ve got to tell you. It’s an absolute train wreck for the American public.

Manila Chan: Now Pap, we all know that in a court of law, precedence is everything. It can have lasting impacts on all future cases that follow. How might this ruling, whatever it may be, out of the DOJ, how will it affect other similar mega mergers, like Comcast and Disney, heading into a potential bidding war over some Fox properties?

Mike Papantonio: The horse is out of the stall, man. It’s at a full run. We see Bayer and Monsanto. We see DuPont and Dow. We see one merger after another because we don’t really have any regulators that understand how dangerous it is, or at least they don’t care. Interesting thing, as these mergers take place, take a look at the regulators, people from the DOJ for example, regulators with the FCC, regulators that should be stopping all of this. Take a look, you’re gonna be fascinated by this, at the number of those regulators that all of a sudden are leaving their job with the government and going to work with the AT&Ts and the Time Warners in the midst of this merger.

The worst thing about it is we’re also looking at the problem of net neutrality. Now the net neutrality problem is on us. These same people, AT&T, is gonna be able to make a decision … Well, let’s throttle back independents. Let’s throttle them back and let’s only have our word out there, and there’s no cost to them. The cost is gonna be coming to the independents who have to pay more to get their material out there. Now you have AT&T. They own your phones. They own your internet service.

Mike Papantonio: And now, they own the media. This is a train wreck, and of course, corporate media won’t say a word about it because corporate media wants this to happen. Corporate media thinks bigger is better, and the people at the top of the food chain, like this cat who’s gonna sell all of his interests after this is done, become a gazillionaire. He’s gonna move on, and the public is going to be left with this toxic disaster because we have a DOJ asleep at the wheel. I don’t even know if they’re asleep at the wheel. I think they know what they’re doing. They really don’t care anymore. It’s well beyond simply not understanding the facts. They understand what a monopoly is. That’s what we have here.

Manila Chan: You hit the nail on the head there, Mike. As we know, the guys that retire from Capitol Hill, they go right into private corporation and do the same thing, and profit off the laws that they just passed the year before. As always, thanks for chiming in with your expertise on this. Mike Papantonio, host of America’s Lawyer.