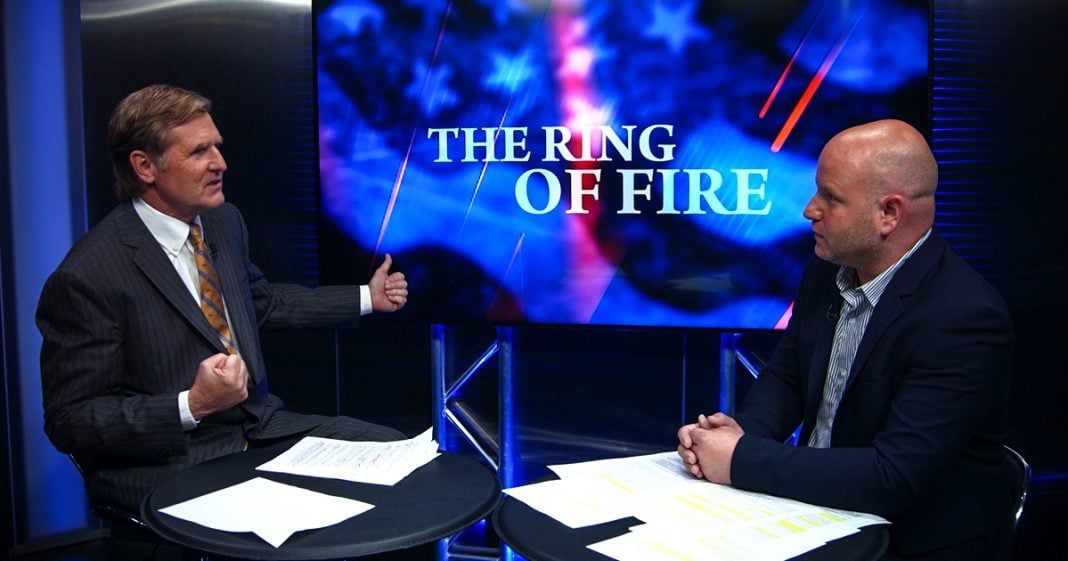 President Trump has signed a bipartisan “Right To Try” bill into law that will give dying patients the chance to try experimental drugs that haven’t been approved by the FDA. Ring of Fire’s Mike Papantonio and Farron Cousins discuss this.

Are Your Prescription Drugs Safe? Find out by clicking here.

Mike Papantonio: President Trump has signed a bipartisan right to try bill into law that will give dying patients the chance to try experimental drugs that haven’t been approved by the FDA. Farron, the other side of this is it also allows the pharmaceutical industry to make most consumers into guinea pigs. This the threshold, this is what we’ve always been waiting for as the pharmaceutical industry has gotten more and more powerful. This is like the big drop. What I mean here is in the past we’ve always joked or really kidded ourselves in believing the FDA was there to protect us. The FDA, I got to tell you, you know how many these national pharmaceutical case I’ve handled. I can’t even count them. There’s been so many projects that I’ve handled with the pharmaceutical industry. Every time we’ve look at it, it has been the FDA doing a dysfunctional job where it comes to looking out for the consumers. Here it’s even worse. Because right now this law gives a pharmaceutical company a chance to bypass the regular experimental process. We go right into clinicals where we’re actually using human beings as guinea pigs because we’re saying we’re going to save your life.

You know what? The problem is the expansion of it. Obviously somebody who’s dying, they have no other chances, this is not a bad idea. The problem develops when we take the next step. How did you read this? What’s your take on it?

Farron Cousins: It’s interesting because this is one of those things that it looks great on paper because yes, if somebody is dying, they have no other options and pharmaceutical comes up says, “Hey, you want to try this? It may work. It may not, but what do you have to lose,” basically. So yes, it seems like that would be a good idea. But there is such a slippery slope and this pushes this right up to that very thin line. Because at the same time it may save their life, it may cure whatever is killing them. It can also cause 10 different other things that will also kill them.

Mike Papantonio: It is really nothing less than saying, “Look, you don’t have any choice. So we’re going to use you as a human guinea pig. You may only have a year left, but if you take this medication, you need to know this can happen, this can happen, and this can happen.” They don’t even know what’s going to happen. You understand what I’m saying? At this point, they’re saying that that individual who opts to do this, they don’t even know what to tell them might happen because they’re actually experimenting in real time with that human being. That’s what this is about. This is just allows the drug industry … Now, the other part of it is they get to do … Take a look at other uses for the drug.

Mike Papantonio: You see what I’m saying? They may say we’re treating this for … You’re taking this for cancer. All of a sudden they’re finding that they can also use the drug for other uses. The patient doesn’t know that. The patient says, “Look, I just want to be cured.” This is a pretty ugly story.

Farron Cousins: When you also think about it too, this is a great way for big pharma, they don’t have to spend as much on research and development now. They can go out and actually openly, actively solicit anyone that is suffering from any kind of terminal disease and say, “Hey, we’ve got this hugely experimental lung cancer drug. You’re going to die in the next six months anyway, so why don’t you just take this.”

If it was in a situation where the FDA was already so dysfunctional, I don’t think my reaction would be quite so bad. But I know how dysfunctional they are. They’re basically useless is …

Farron Cousins: When you think about it too, suppose they give a dying patient this medication and it actually does save them. What’s going to happen now because the FDA is dysfunctional, they may go ahead and put them on a fast track for approval. Not require as extraneous testing as they may have because hey, it worked in the field on a human being. But again that can also, as we’ve seen, that can be the fluke. The side effects may be the real thing that happens, but curing that one person might be the fluke.

Farron Cousins: So it’s a dangerous thing all around. But again on paper, it looks great. It looks like you’re giving patients a possibility of living but it’s a huge giveaway to big pharma.

Mike Papantonio: They should call this the human guinea pig law because that’s really what it is.

The lawsuits against Harvey Weinstein have taken an interesting turn. Now they involved RICO claims against the people in the groups and the companies that helped cover up abuse for a long, long time. If you look at this lawsuit, I’m very familiar with a law firm that brought this suit. We’ve worked with them on a good many projects over the years. They’ve worked on the same projects that we have. This is a serious firm and this is a serious lawsuit. They’re actually alleging a RICO case. They’re saying that what’s happening here is racketeering. They’re tying those elements of racketeering into everything that Walt Disney Company, for example. They’re saying, “Look, you knew what was going on. You participated that.” Miramax participated in that. You weren’t living in a cave. You clearly understood what was going on. Or how about the board of directors, Weinstein’s board of directors. Or how about just the agents and the people who knew exactly what was happening. This is a really smart lawsuit because what it does is it brings in everybody, it holds everybody responsible here. Okay? Let them sort it out. Let them get in a room and say, “I didn’t do this.” Let them sort it out. That’s the wisdom of this kind of case.

What do you think?

Farron Cousins: Well, Weinstein to me is almost like a termite. Yes, it’s very bad, very dangerous, did some horrible things, but you have to take out the whole colony. You can’t just squish that one termite and think you solved your problem. That is exactly what happened here. It’s what we saw at USC. It’s what we saw at Penn State. There was cover up at every level. You can’t operate and harass or assault as many women as Weinstein is accused of doing without other people knowing it.

Mike Papantonio: Yeah, the Southern Cal case, as you know, we’re working on that case. It’s the same kind of deal. Southern Cal even took place after there had already been the Cosby case, after there had been the Weinstein case, after there had been dozens of cases where we saw that the institution itself was … They were part of the program. They actually helped promote the program. Penn State, great example. I mean, this were the institution is involved. So the Southern Cal case, we’re going to find the institution was very, very involved because they were already on notice that there was a problem here and did nothing. These folks when you look at the producers, when you look at the agents, when you look at this list of people who had every reason to know what Weinstein was doing, but they were so terrified that they were going to lose money.