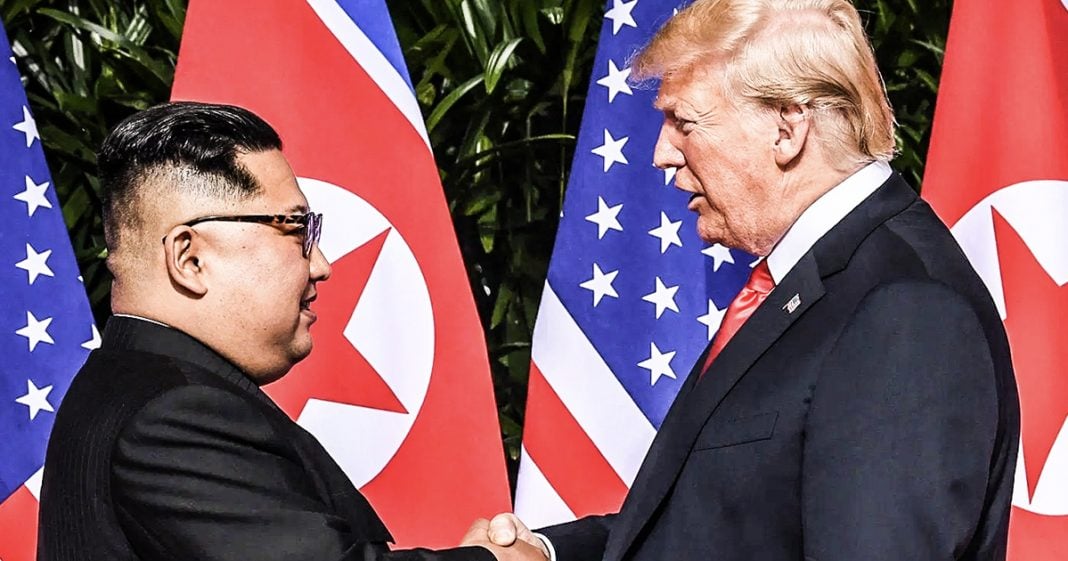 One of the first things that Donald Trump and Kim Jong Un discussed during their meetings was all of the “beautiful” real estate that the country has on the water, with Trump even mentioning that Kim could have some of the best hotels in the world built there. We all know what that means, and it helps us to understand why Trump was so eager to legitimize this dictator. Ring of Fire’s Farron Cousins discusses this.

Well, Donald Trump has talked to Kim Jong-un. They’ve come to some kind of agreement that really never actually finalized any details on if or when North Korea’s going to denuclearize, but that was never the purpose of Donald Trump’s talks with Kim Jong-un. No, see the real purpose, the real reason Donald Trump wanted to meet with Kim, the leader of North Korea, is because Donald Trump wants to start sucking up all of that valuable real estate available in North Korea, and if you don’t believe me then all you have to do is watch what Donald Trump told reporters on Tuesday morning. He specifically said that while he was talking with Kim Jong-un, he said the following, “You could have the best hotels in the world right here. Think of it from a real estate perspective.”

That is what Donald Trump told reporters that he told Kim Jong-un. “Don’t worry about everything else. Think of the real estate opportunities here.” And we know that North Korea is well aware of how much money Donald Trump wants to make, because about a week ago they announced as one of their concessions, as far as negotiations go, they may open up the country to outside real estate investors. Donald Trump wanted this entire meeting to take place, wanted to forge this friendship with a brutal dictator, because he wants to open hotels and buy up real estate in North Korea. If you think that this deal, that this meeting, that these negotiations are about anything other than Donald Trump trying to make some more money then you’re lying to yourself. Look, I would love for these talks to result in a lasting peace between North and South Korea and North Korea and everyone else on the planet, but it won’t. I do not have any faith in Donald Trump, and do you know why I don’t? Because I pay attention to the words that he says. I watch what he does.

It doesn’t take a lot of real brain power to kind of figure out the pattern that Donald Trump has been living his entire life. “How can I make money on this? How can this further my ego?” Well, guess what? This little summit with Kim Jong-un has done both of those. He’s getting all kinds of praise right now, even from some on the left saying that “Wow, this is great that he did this. Wow, look at him. Maybe he’ll do something.” Maybe he will do something like open a hotel in North Korea, or just go ahead and maybe have Jared Kushner go over there and suck up all the available real estate for them to sell at a higher profit later, because that’s what’s going to happen from this. North Korea made few, if any, concessions in this negotiation that they’ve made. The United States gave up everything, and it’s because Donald Trump wants to use that country to get a little bit richer.