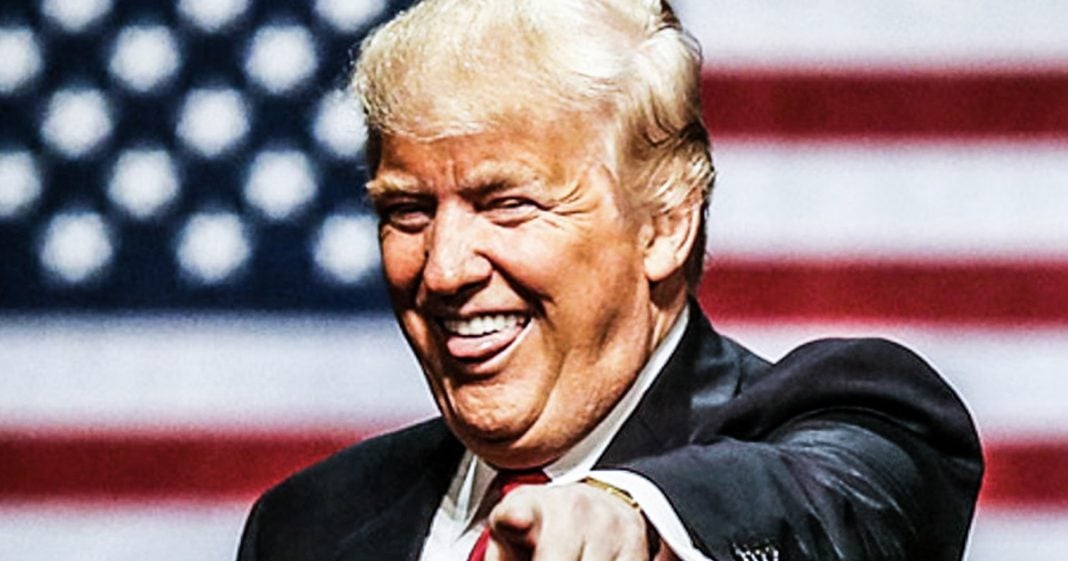 Donald Trump took time out of his North Korean summit this week to tweet out a note of thanks to the Supreme Court for deciding that it is perfectly fine for the state of Ohio to purge eligible voters from their voting rolls if they didn’t vote in recent elections. This is just taking us one step closer to being an actual banana republic, and Trump thinks this is great news. Ring of Fire’s Farron Cousins discusses this.

On Monday of this week, the Supreme Court handed down a 5 to 4 decision which was voted on along party lines which said that Ohio is 100% in the right by kicking people off the voting rolls in their state if they haven’t voted in more than two years.

Donald Trump, shortly after the Supreme Court announced this decision, which will effectively disenfranchise hundreds of thousands of voters, tweeted out the following. He said, “Just won big Supreme Court decision on voting! Great news!” No, Mr. President, it’s not great news. What this is is subversion of our democracy, of our very basic right as American citizens, which is the right to vote. And you’re celebrating the fact that the state of Ohio is taking away from people, not because they broke the law and lost the right to vote, not because they committed voter fraud, but just because they didn’t vote in the last two years! Maybe they had to miss the midterms because they were sick or in the hospital or couldn’t get off work that day, or were out of town visiting relatives.

Who cares what the reason is. If you didn’t vote in the midterms, you just lost your right to vote in the state of Ohio and the president of the United States and Republicans around this country are celebrating it. Why?

Because according to statistics, the majority of people that had already been kicked off the voting rolls in the state of Ohio for not voting in the last two years, majority of them were African-Americans! 144,000 people kicked off the rolls so far in Ohio for the crime of not voting in two years? And most of them are African-Americans, who tend to vote with Democrats. That’s why Republicans are so happy.

That’s why Donald Trump is so happy because if you can’t beat ’em, cheat ’em! That’s the GOP mantra. They know that they’re facing a hell of a fight in this year’s mid-terms, they know the Democrats are energized and ready to go vote. So, in order to stave off that blue wave, you have to just kick ’em off the voting rolls. And this Supreme Court decision could very easily open the door to other states doing the exact same thing.

Other states already looking at this: Oklahoma, Montana, Oregon, Pennsylvania and West Virginia. Right now. God only knows what’s gonna happen in the next month or two as other states see, “Oh, we can kick people off the voting rolls? And we’re a swing state?” Or we’ve got a lot of vulnerable conservatives that we want to get re-elected to Congress? Maybe we’ll do the same thing.

Because again, the statute on here is two years. If you didn’t vote in two years, you’re off the roll. They did it in Ohio. The Supreme Court says it’s okay, even though technically it is a violation of federal law, so the Supreme Court justices actually had to twist the law, which was very clear, in order to give this the okay. But you know what?

This is what happens when Republicans steal a Supreme Court seat, as they did for Neil Gorsuch. He shouldn’t be on that court. This decision would have gone the other way, and we would have preserved the right to vote for hundreds of thousands if not potentially millions of American citizens.

But Republicans fought. Republicans won, and now Democrats are the one paying the price by being kicked off the voting rolls and losing any voice that they may have had in this country.