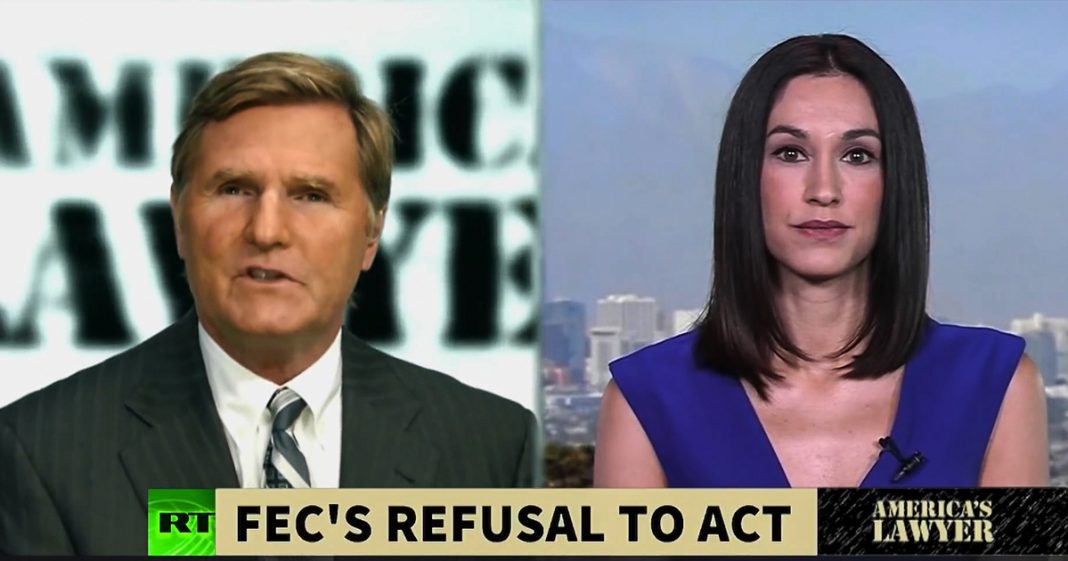 Via America’s Lawyer: The FEC is under fire for allowing campaign “dark money” to go uninvestigated by the watchdog group known as CREW. Mike Papantonio and Brigida Santos explain.

Mike Papantonio: The Federal Election Commission, the regulatory agency tasked with enforcing campaign finance laws is under fire for allowing campaign dark money to go un-investigated. The watchdog group known as CREW says this shady cash was funneled through super PACs to help finance democratic and republican candidates. Despite having raised concerns to the FEC, the watchdog claims that they were ignored, and now they want the agency to be held accountable.

Joining me to talk about this is our team correspondent Brigida Santos.

Brigida, so what do they mean by dark money? We’ve heard the terms, but there’s all new iterations of what dark money actually means now because the laws, the FEC seems to be ignore everything having to do with illegal campaign donations. What is your take on that?

Brigida Santos: Dark money is political cash that is donated to a candidate from a hidden or undisclosed source. Now, money can be hidden on its way to a candidate either by passing through a non-profit, also known as a social welfare organization, or through an LLC. LLCs are sometimes set up with the sole intention of hiding a donor’s identity.

Mike Papantonio: The FEC has become so apparent that it’s just nothing more than a political vehicle. The democrats are involved; they use it as a political vehicle against republicans, and vice versa. And you have to wonder, is it really even an agency that we need nowadays? It’s become such a wild west out there with Citizens United, and with all the iterations, the interpretations after Citizens United. You even wonder if the FEC is even relevant anymore because it really is nothing more than a political extension for the party who happens to be in office at the time.

Who is CREW, and can you tell us about the cases they say that FEC dropped the ball on?

Brigida Santos: The watchdog CREW is an organization that stands for Citizens for Responsibility and Ethics in Washington. Now, they have filed two lawsuits against the Federal Election Commission for failing to investigate two complaints that CREW made, the first one back in 2015, and the other in 2016. The FEC was supposed to investigate within 120 days. That was the deadline. They have yet to do that, so that’s why they have filed these two lawsuits.

Now, the first lawsuit involves a $1 million donation that was made by the trust D.E. First Holdings to a super PAC called Coalition For Progress that was supporting a New Jersey City Mayor who was planning to run for governor, but never actually ran. Now, this donation was, again, by D.E. First Holdings, which was set up the night before it actually made that donation. So it had never been in business before. It didn’t make enough money to have income to actually justify that donation, which indicates that it was a sham company set up to illegally launder this political donation. So CREW is now accusing the Coalition for Progress super PAC of violating Federal Election Commission regulations that prohibit knowingly accepting a contribution from one person in the name of another.

Now, the second lawsuit involves two $100,000 donations that were going to Jeb Bush’s 2016 presidential campaign. Again, these look like companies that were set up just to illegally launder this money.

Mike Papantonio: Interesting thing about the FEC … Right now, Trump has not figured out … He hasn’t packed the FEC yet. I don’t know. It’s almost like he’s been asleep. The numbers don’t really add up real well for what he needs to accomplish there, because I said FEC is nothing more than a political extension. And when you really take a look at what they’ve accomplished the last couple decades, it’s almost zero.

Brigida Santos: No, they have not responded, and they haven’t said why other than the fact that they are not allowed to comment on active litigation. That is their official policy. The one thing that CREW really wants them to investigate here is why is this money being hidden, because super PACs are already allowed to accept unlimited amounts of cash as long as they disclose where that money is coming from. And one of the main reasons why a donor might want to hide their identity is because they could potentially be a foreign entity donating money into our American elections, which is illegal.

There are many articles about how the mysterious surge of dark money took down an Ohio candidate after she was doing well. What do you know about that case, and what happened there? It kind of gives us some more insight into the FEC, doesn’t it?

Brigida Santos: Yes, absolutely. Ohio State Representative Christina Hagan lost a congressional run after failing to support a bill that would benefit a utility called First Energy. Now, after lobbyists tried to get her to vote in favor of the bill, she said that she would not support it because it would raise utility rates for constituents in her district, and it would also be unfair to constituents that use electric energy. Afterward, a non-profit group called The Conservative Leadership Alliance, whose treasurer has also worked as a lobbyist for First Energy, took out $56,000 and spent it on political attack ads against her, and also spent the same amount of money to support her competitor.

Brigida Santos: Outside spending on television ads in this year’s midterms are up 90% in comparison to midterms in 2014, and that means that two out of every three ads in House and Senate races have been funded by dark money, and since 2010 when Citizens United versus the FEC ruling came out from the Supreme Court, dark money groups have spent over $800 million on federal elections.