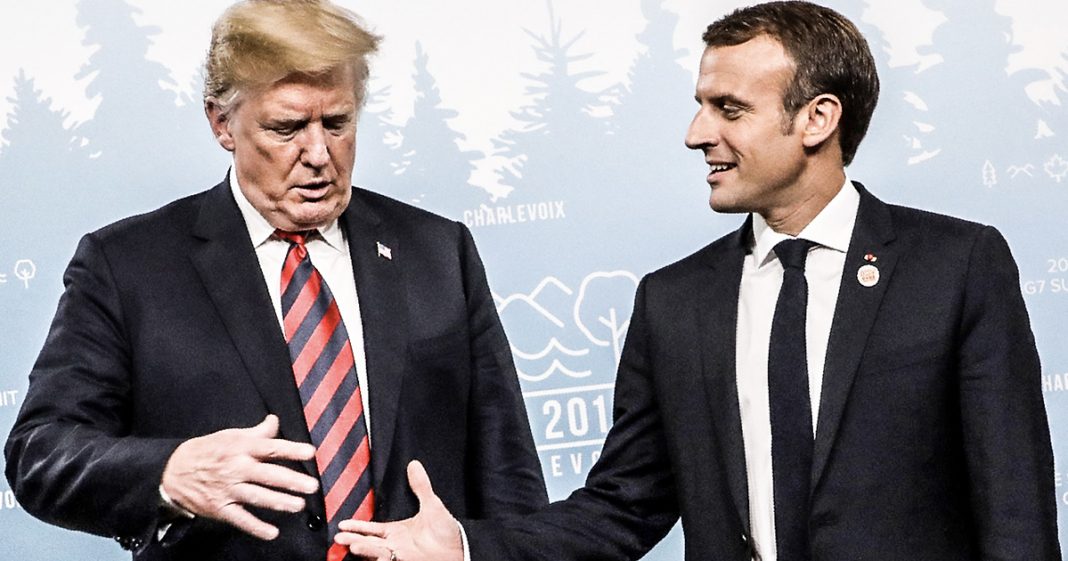 Donald Trump spent most of the last few days in Canada, visiting with powerful leaders from around the globe at the G-7 Summit. And as everyone had predicted, Trump made a complete ass of himself, and by extension, the entire United States. He’s threatening our closest allies with massive tariffs, calling them “dishonest” and attacking their credibility, and threatening to plunge the US into a full on recession. Ring of Fire’s Farron Cousins discusses this.

This past weekend, Donald Trump attended the G7 summit in Canada, and as everyone predicted, it was an absolute disaster for the United States. From the moment Donald Trump walked into the Canada, things went downhill. First and foremost, the man was late for the overall meeting. He was late for the first gathering. He left early, decided to walk out of a couple of meetings because he didn’t agree with what they had to say, did not attend the discussions on climate change or women’s rights, which again, came to no one’s surprise, and then of course, he left the entire thing early after getting pissed off at Canadian Prime Minister, Justin Trudeau.

He then got on Twitter and attacked Justin Trudeau as being meek and mild and someone who’s taking advantage of the United States. Larry Kudlow, Trump’s economic advisor, went on TV and attacked Justin Trudeau. Emmanuel Macron, the president of France, came out and attacked Donald Trump because he used small words and was just kind of incoherent throughout the entire meeting. Trudeau, to his credit, has remained a little more diplomatic about it. But overall, the takeaway was that Donald Trump was the child in the room. The grownups were trying to conduct business. Donald Trump didn’t want to listen, so he makes an ass out of himself, and by extension, every one of us here in the United States.

Oh, and of course, we cannot forget that one of the first things Donald Trump did was ask them to reinstate Russia and go from the G7 to the G8, because he no idea why Russia wasn’t even there. Then, when he found out, he actually blamed Barack Obama for letting Russia annex Crimea and not doing enough to stop that, as if it was somehow Barack Obama’s fault. Donald Trump is far more comfortable around totalitarian leaders like Vladimir Putin or like Kim Jong-unfortunately than he is those leaders there at the G7.

Here’s the thing. Donald Trump, as I mentioned, he got on Twitter. He’s attacking Justin Trudeau. He’s throwing out all these numbers and facts and statistics that according to his own Labor Department and Economics Departments, they’re wrong. He is flat out lying about trade between the United States and some of these countries, specifically Canada. We actually do have a surplus over there.

But furthermore, Donald Trump doesn’t seem to understand what tariffs are all about, which is why he was getting so pissy and throwing his little childish temper tantrums at the G7 summit. Tariffs are in place to make domestic goods more competitive. That’s why we have them. That’s why other countries have them. He wants these other countries to drop their tariffs on US goods completely. Zero percent tax, right? That can never happen for the good of their own economies. You can’t do that, just like we could never end tariffs on goods coming in to the United States. It would kill domestic production, but Donald Trump doesn’t understand that because he’s a businessman, not a politician, not an economist, not a lawyer, not anyone with a brain.

He is a guy that has had everything handed to him in his life, and he expected to walk into that G7 summit and have everything handed over to him, and that’s not how it works and this is what happens when you put a businessman in the White House rather than someone who actually understands how politics work, how diplomacy works, and more importantly, how the global economy works.