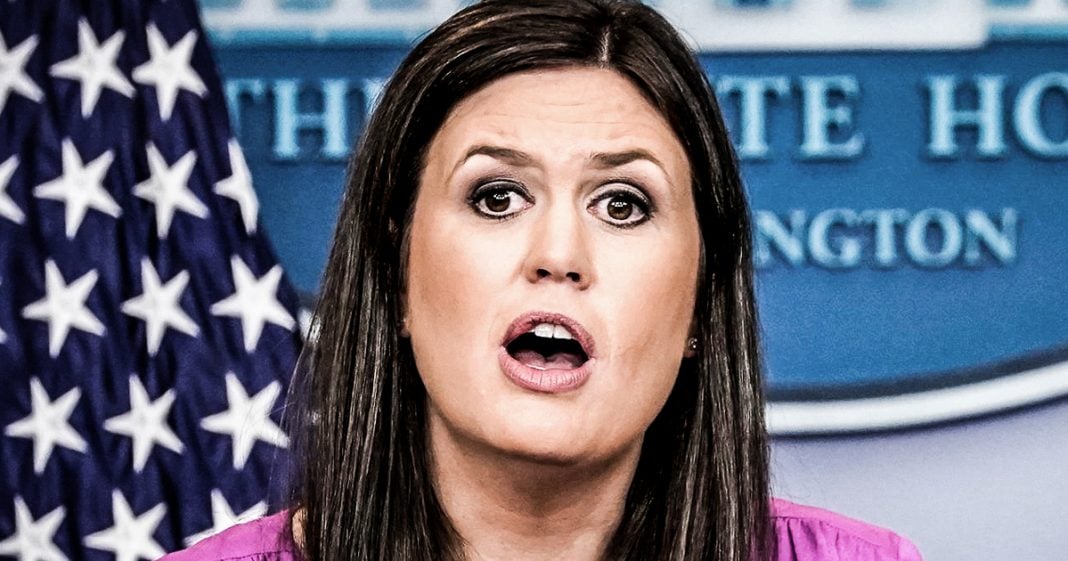 Over the weekend, a panel on Fox News decided to tackle an issue that once seemed impossible for them to address: The issue of Sarah Huckabee Sanders lying to the American public. The panel seemed to agree that Huckabee Sanders needs to own up to her falsehoods if she wants to maintain any shred of credibility. Ring of Fire’s Farron Cousins discusses this.

This past weekend, I guess that’s the time when Fox News figures their hardcore viewers aren’t actually tuning in, because the network did something that I never thought we’d see them do. They actually went after Sarah Huckabee Sanders for her constant lying. Take a look.

Molly: Right, last year she specifically said that Trump didn’t dictate this letter. The attorney’s letter says he did. That is something that needs to be dealt with. No one begrudges her for having had false information, and it’s not even a big deal whether the president dictated this letter or not, but something needs to be done to restore credibility when you have said something that’s not true. I’m surprised that they don’t have a better way of cleaning that up.

Speaker 4: There’s a lot of focus on the letter because the feeling was it minimized what actually happened at the Trump Tower meeting one. We just heard Sarah Sanders say to reporters are trying to tear her down. She used that phrase that her credibility is higher than the media. Was this her way of deflecting the question about why can’t you own up to the fact that you either made a mistake or were given inaccurate information?

Speaker 2: I think it’s very combative. I think it’s reflective of her boss, who I think is a huge leaker according to everybody in the press core himself. The idea is that she’s protecting her boss or somebody very close to her boss who gave her the bad information. She’s being a good soldier for the administration, but in the context of the combative relationship between the American press and the Trump administration it takes on a different hue and that Sarah Sanders is saying, “I’m going to punch back,” just like Donald Trump says, “I’m a good counter puncher,” that was Sarah at her best.

That was from a show called Media Buzz. It’s a weekend Fox News program that discusses the media and they are even tired of hearing the lies coming out of Sarah Huckabee Sanders mouth, but it’s not just the lies is they’re talking about. It’s the fact that she won’t even acknowledge when she gets busted on one that she had lied. She won’t own up to it. If you don’t own up to it there is not chance in hell that you can ever have any kind of credibility, and that is what we’re dealing with right now with Press Secretary Sarah Huckabee Sanders.

She has zero credibility. Nobody should believe something that this woman tells them. If she tells you that the sky is blue it’s probably worth a chance to go outside and verify for yourself because that’s how dishonest and untrustworthy she truly is. Even Fox News felt it necessary to call her out on this. That’s bad for Sarah. That’s bad for the White House.

I don’t think that Fox News has turned a corner and they’re going to start going after Huckabee Sanders or the Trump administration for all of these lies. What I’m saying is that there are cracks in the façade because it starts with calling out one and getting annoyed with one. Once you’ve kind of broken that seal maybe you do it again in a couple weeks, and then maybe again the next week, and so on and so forth.

This administration is not untouchable. As these scandals mount, as the investigations heat up, and as Sarah Huckabee Sanders continues lying to us on a daily basis, I think we’re going to see, slowly at first, but possibly more after that, people on Fox News becoming more and more willing to call this administration out for their nonstop lying.