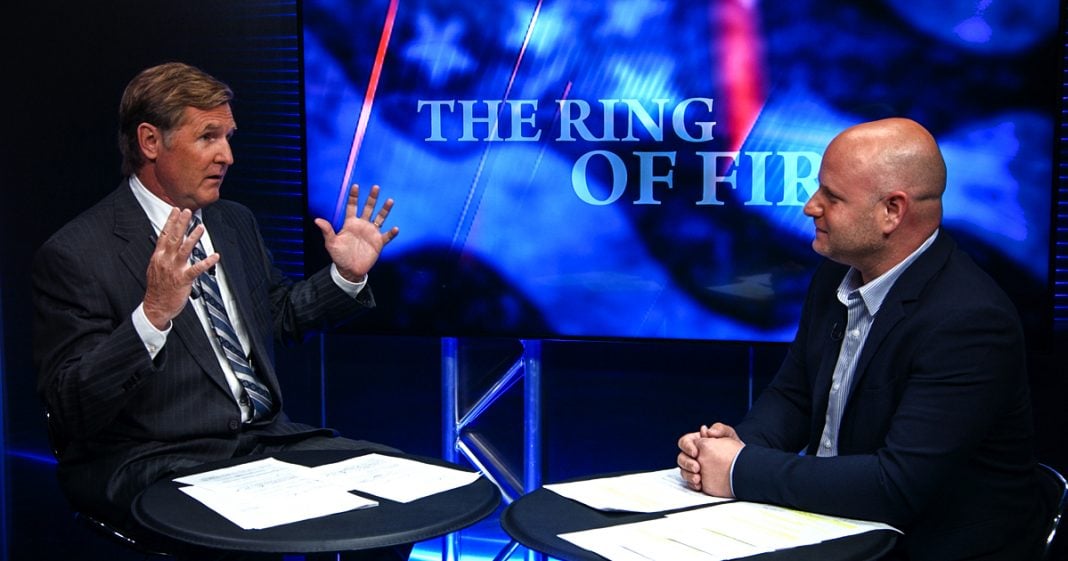 The state of California is considering a new law that would help protect your privacy while online. This move would make California the leader in online privacy in the United States. Ring of Fire’s Mike Papantonio and Farron Cousins discuss this.

Mike Papantonio: The state of California’s considering a new law that would help protect your privacy while online. This move would make California the leader in US online privacy rights. Go California.

Farron Cousins: This is a phenomenal piece of legislation, it really is. This California Consumer Privacy at of 2018 is what they’re calling it, and the reason this even came about is because a wealthy Californian was at a party where he met a Google employee. I think he was higher up in the ladder but they were talking about online privacy and he said, “do you guys really know that much about people?” And the Google employee said, “if you knew how much we knew about you, you would faint.”

So he started this big movement to get this law in there. The law makers listened, they’ve drafted it, and basically what it does is, it says, if you go to a website they have to expressly say on there, we’re going to sell your data unless you click this button to say no we can’t. And that is huge because people don’t realize any website you go to, that’s pulling your data and then it can be sold. The US is one of the worst countries in the world right now for online privacy.

Mike Papantonio: Europe is so far ahead on this, they’re saying look, why are going to put our citizenry at risk? I mean, we’re talking about at risk. Why are we going to put them at risk so Facebook, or whoever, can make more money on that information. Information is power right? The more information that you have the theory is, the more power you hold. So there’s everybody looking to hold that power. They want to know, what car you want to drive? They want to know all these details about you so they can pop up ads all over the place. They know it’s a money issue.

So California has made a policy decision. This is a public policy decision. They’ve said that people’s private rights are more important than the economic benefit to corporations. Now what we’re going to see in that argument, that’s the dichotomy, it’s very clear, the lines set in the sand. The argument that we’re going to hear from the Facebook types is, oh golly gee, A, we’re not abusing this, we’re using it to make our system better. Which is a lie. But we’re also going to hear what we call the commerce clause argument aren’t we?

So they’re going to say that this is going to be commerce clause issue. That California’s decision to do this is interfering with national commerce.

Farron Cousins: Well yeah absolutely, and that’s one of the things that’s scary about this, that could get it struck down, is that as you said they don’t know necessarily where you’re at, and they can’t redirect an IP to a different version of a website because they can’t make those kind of calculations and algorithms that quickly.

So if I’m in Florida and I go to this website, it’s going to have that disclaimer there because California law requires it, and they don’t know where I’m accessing this from. So the best we can really hope for is that not only does this go through and pass because it’s going to be on the ballot this year in California, but that when challenged it survives. Because if it survives which I don’t know that it will, then we’re looking at maybe some national action on it.

Mike Papantonio: It’s a tough road. They’re going to face some really steep constitutional arguments. Facebook is being sued yet again, this time for allowing employers … Facebook, go away Mark Zuckerberg. They’re using Facebook’s tools to engage in age discrimination with job postings. In other words if you’re over 50, they don’t even put your picture up there that’s … they don’t make any effort to have you in the process of maybe getting a job, and they don’t even deny it. They say yeah, we’re doing that. Some old guy needs a job, we’re going to treat them different like we’ve never heard of equal protection in this country. Like we’ve never heard of age discrimination. Zuckerberg has turned in to a Frankenstein, and he doesn’t have enough self awareness to even understand that he’s Frankenstein. This is a great example of how out of control they’ve become.

Farron Cousins: It really is because you know this lawsuit, Communication Workers of America, great union, great organization, representing these people because they were excluded, not even allowed to see job postings because these employers using Facebook’s algorithms and tools were able to go in there, and target say, yeah I want 18-24, or 25-35 only. If their age is over that, which Facebook knows because we’ve put it in there, do not show them this ad.

You know what sometimes corporations, they may not want to hire the 55 year old but everybody has a right to apply for that job, to see the job posting, and yes you can not discriminate based on age.

Mike Papantonio: Can I tell you something, I’ve looked at several of the many, many lawsuits being filed against Facebook. This is a strong one. This is one that if I’m calling they’ve got a problem, this is probably it.

Got a couple of minutes. Several states are suing the EPA for eliminating their safety training requirements for workers handling pesticides. Used to be a law to where if you had workers that were working around pesticides that maybe wouldn’t kill them that day, that would kill them 10 years from now, you had a duty to have a training program, and to say look, this is Roundup for example. You may think Roundup is safe, Roundup is not safe. Roundup will cause cancer, it will cause neurological disease and you need to know that. They had the requirement of giving the whole story, good and bad, and now of course, this idiot, Scott Pruitt. The idiot of all idiots working as somebody in control of our government says, no we’re going to do away with that.

Farron Cousins: See this was actually a great rule put in place by HW Bush back in ’92, and like you said it was basically just hey, if you’re going to handle these pesticides or herbicides, or other industrial farm chemicals you have to, one, we tell you the whole story but two, we show you and provide training on how to properly do it, and get it off of whatever clothing you’re wearing so that you don’t take it home and poison your kids, or your wife or husband or whoever. And Scott Pruitt came along and said, huh, you know I don’t think we need to teach these people who most of them obviously didn’t go to college, they don’t speak English hardly all, here’s a container that you wear on your back of toxic pesticides go have at it.

Mike Papantonio: And it will be 10 years, 15 years before you die, by then Scott Pruitt will be gone.

Mike Papantonio: You’re deported, living in Cantina Mexico. You have no idea really what’s going to happen to your family. I’m Mike Papantonio here with Farron Cousins, watching Ring of Fire, and we’ll be right back.