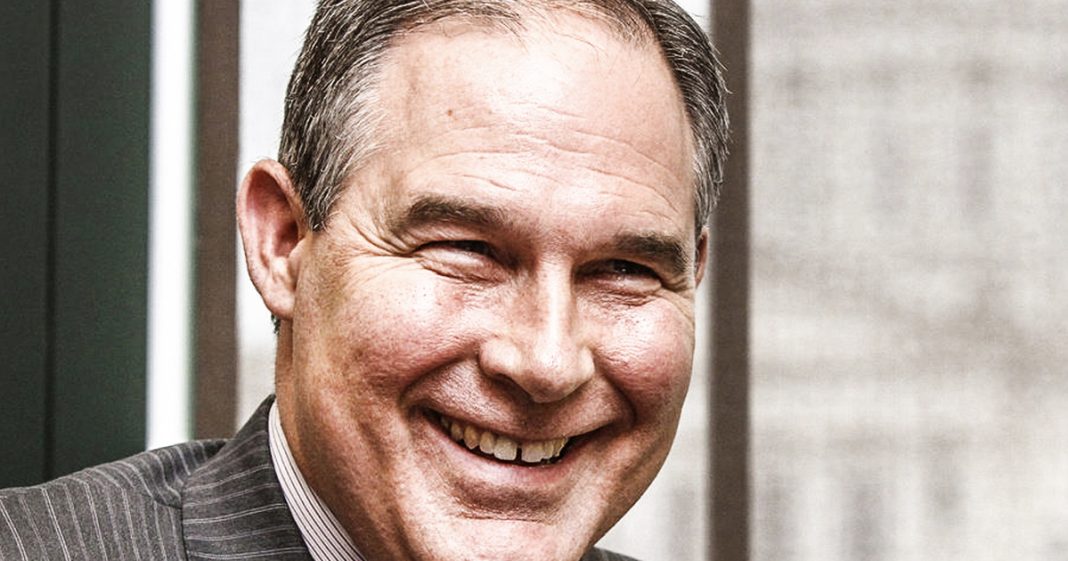 EPA Director Scott Pruitt is embroiled in scandal after scandal, prompting many in the public – from both the right and the left – to question why this man is still in office. The answer is simple: Republicans in Congress are protecting him by crippling the agencies that should be investigating him. As long as Pruitt delivers for Republican donors, they’ll sell their souls to protect him. Ring of Fire’s Farron Cousins discusses this.

Both Republicans and Democrats right now are asking the question, “How in the hell does Scott Pruitt still have a job?” On Thursday morning, Fox News research, their Twitter account, actually put out a tweet listing all of the new Scott Pruitt scandals that have emerged in just the last two weeks. So even Fox News is telling us how bad Scott Pruitt is. And when it gets to that point, it really makes you wonder how in the world anyone can stand up for this guy. Yet, that is exactly what Republicans in the US House of Representatives did this week. On Wednesday afternoon, Democrats in the House of Representatives, tried to put forth an amendment to a piece of legislation to increase the budget for the Office of Inspector General of the US Environmental Protection Agency. The reason they did that is because the OIG is the office that actually investigates the scandals that Scott Pruitt has been involved in. And, according to recent reports, they’re already out of money.

They don’t have enough money to not only not investigate all of the new scandals that have come out from Scott Pruitt, but they can’t even fully investigate the old scandals that erupted last year. So, the Democrats wanted to give them an extra $12 million. That’s it. $12 million. Small amount for a government that pulls in billions, right? Well, Republicans on the committee where this amendment was put forward, they, every single one of the Republicans on that committee, voted against it. They have sold out the American public, and even their own supporters, in order to protect Scott Pruitt. They said, “No. The EPA OIG cannot have anymore money to investigate this man’s scandals. Yes, we know that Democrats, Republicans, and everybody in between including Fox News is pissed off about the fact that this man has a job, and he is embroiled in scandal after scandal after scandal, but we don’t care.”

Why? Because Scott Pruitt is handing over the keys to the kingdom, to the top Republican donors in this country. Oil companies. Chemical companies. Other polluters out there. Refineries. Everybody who gives a ton of money to Republicans. Even pharmaceutical companies, actually. Everybody who gives a ton of money to Republicans is getting every thing they wanted from Scott Pruitt. So why would Republicans risk, you know, hurting their own donors? Here’s the thing though. Even if we get rid of Scott Pruitt, what’s that going to do? It’s going to get rid of the scandals maybe. Maybe. But, we’re going to get somebody who’s just as bad on economic policy. I mean, it’s not like we’re going to get a Leonardo DiCaprio or an Al Gore type coming in there at the EPA, saying, “Okay. We’re going to clean up the environment. Act on climate change, because it is real. We’re going to make things right for the environment.”

No. We’re going to get another corporate shill who’s going to come out, help destroy the environment, hand over everything that he can, or she can, to corporations, wealthy Republican donors, to make sure that they keep giving money to Republicans, and that Americans do not have a clean environment, so that they can’t trust the air that they breathe or the water they drink. But, Scott Pruitt still has to go. He is blowing through our tax dollars on things like pens, and used mattresses, and a soundproof phone booth. Three and a half million on private security guards 24/7.

When it gets to the point when you have groups, including Fox News, calling you out for your massive nonstop scandals, then it’s time for the Republicans in Congress to wake up and stop protecting this jackass. Because trust me, every single Republican that just voted to protect Scott Pruitt, a man universally hated by both sides, are up for reelection this year. I hope that their Democratic opponents make sure that every one of the voters in their districts understand that Republicans are more willing to protect Scott Pruitt than they are to protect the will, the ideas, and the desires of the American public.