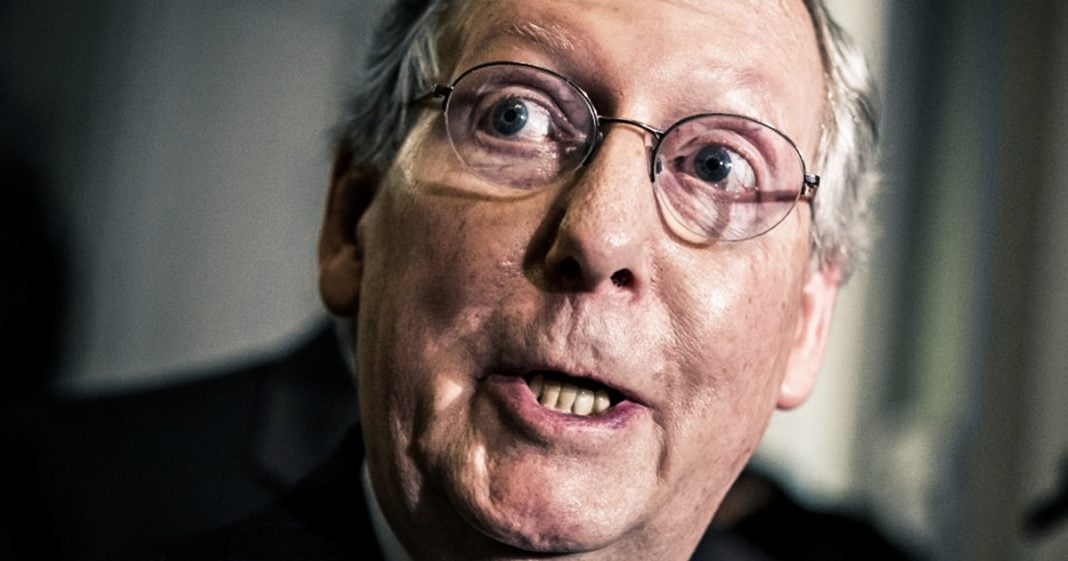 Mitch McConnell has cancelled the Senate’s August recess because he says that they just have too much work to do to make up for the obstruction by the Democrats. But the truth is far more sinister: McConnell understands that there are some vulnerable Democrats in the Senate who could use that August time for campaigning and he doesn’t want to risk losing his Senate majority. Ring of Fire’s Farron Cousins discusses this.

Mitch McConnell recently announced that playtime is over and the Senate will not be taking an August recess. He says that the reason for this is because the Senate, they just have so much work to do. They have so many Trump nominees to confirm because of those darn obstructionist Democrats that he’s not going to let these people take their August vacation. You’re staying here and you’re going to work. Well, first thing’s first. He never did that when the Republicans were obstructing everything from Obama. He thought taking a month off was just fine back then. So, it’s curious as to why he thinks that now, suddenly obstruction is a bad thing when he made it his entire goal during the Obama Administration.

But nonetheless, he wants everybody to stay and he claims it’s because they have so much work to do, and that is a complete and total lie. The reason Senate Majority Leader Mitch McConnell does not want people to go on an August recess is because he is afraid of what is going to happen in the midterms this year. He understands that there are some Democrats in the Senate who are vulnerable. Democrats who needed to use that August recess to go out there, meet with constituents, maybe hold town halls, but otherwise campaign for their lives so that the Democrats may have a very slim chance of regaining control of the U.S. Senate. Mitch McConnell knows that. Mitch McConnell understands that Republicans are in better shape in the Senate so they don’t have to campaign as much, and that is the real reason why he has canceled this August recess.

This has nothing to do with fulfilling Donald Trump’s wish list. After all, some of the appointments, not all, but some of them that Donald Trump has made that are still pending before the Senate, could actually benefit from nobody being in the Senate because Trump could just issue a recess appointment. Then boom, it’s done, like a lot of the judges who will be horrible, by the way, for a generation on the bench. But nonetheless, he could do that. Mitch McConnell knows he has that power for some of these nominees, but he’s making up lies for the American public just so that he can prevent Democrats from going back home to their states and campaigning for this year’s midterms. It’s a very sinister move.

But on another note, I don’t think the Senate, or the House for that matter, or anybody in politics should be able to take an entire month off, okay? The American public doesn’t get a month off of work. We don’t get to take four weeks at Christmastime or over the holidays, or two weeks during Easter and Lent and all that, no. We have to work our butts off. I mean, there’s a very real problem in this country of people not being able to use their vacation days. The U.S. workers lost billions of dollars worth of vacation days last year because they simply couldn’t take it.

So, on the one hand, I have no problem with Mitch McConnell saying, “You guys are going to stay here and you’re going to work.” The rest of the public has to do the same thing, so we should hold them to the same standards that we hold ourselves. But at the same time, he’s doing it for all the wrong reasons. He’s doing it to be evil and he’s doing it because he’s afraid of the potential blue wave that could be coming in the midterms. But, I got news for you, McConnell. This little move isn’t fooling anybody, and furthermore, it’s not going to help your chances of hanging on to the Senate after November.