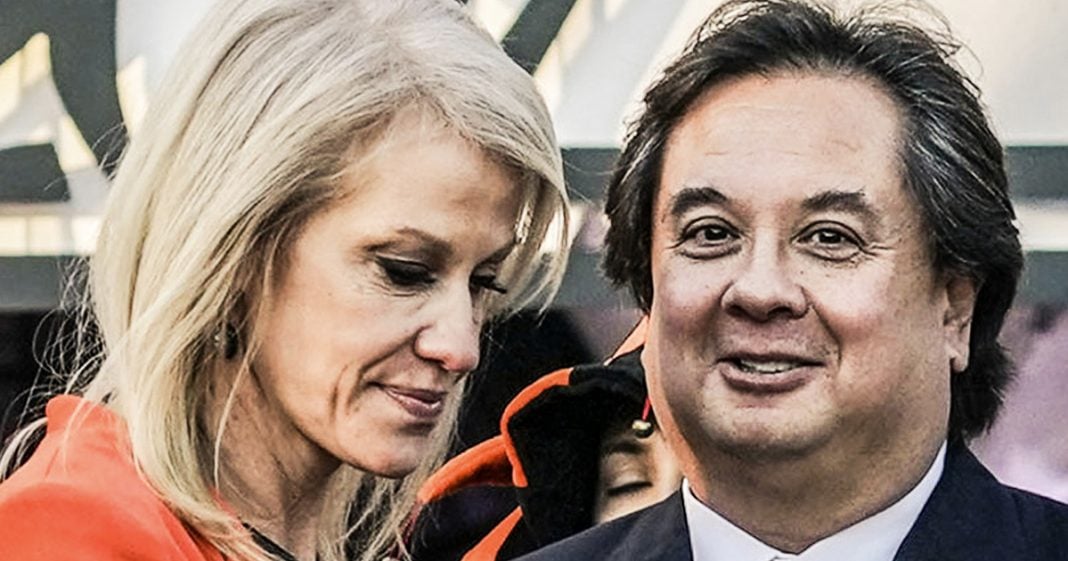 Kellyanne Conway may be one of Donald Trump’s most loyal servants, but her husband, George Conway, doesn’t appear to be a huge fan of the President. George has taken it upon himself to call the President out for his bogus legal claims on Twitter, likely creating a few rifts in the Conway household as he does. Ring of Fire’s Farron Cousins discusses this.

Kellyanne Conway is absolutely one of Donald Trump’s most loyal minions in the White House. In fact, she might actually be the most loyal person to Donald Trump. She is always willing to go out there in the media and repeat some of the lies that Donald Trump tells every day, double down on them, misdirect the public, project her insecurities, and the president’s insecurities on his political enemies. But Kellyanne Conway has a problem, and that problem is her husband, George Conway. You see, George apparently isn’t a huge fan of Donald Trump, and he has spent the last few months expertly and appropriately trolling Donald Trump on Twitter.

This past week, when Donald Trump announced that he had the absolute power to pardon himself, and everybody jumped on and attacked him, George Conway chimed in as well. He decided to respond to a tweet from a Politico reporter, who was responding to the Trump tweet, and George said this: “If this were true, you’d think this conservative Republican-controlled Department of Justice would revoke or decline to utilize the special counsel regulations, but it hasn’t.” See, this was in response to part of the tweet where Trump was talking about the special prosecutor Robert Mueller, and the special counsel being completely unconstitutional.

That’s what George Conway has actually spent several months doing. He loves to get on Twitter and just rile the president up about the false legal claims that he is making. George Conway is an attorney. I don’t know anything about his career, to be perfectly honest with you, but he does seem like he knows a little bit about the law, which is a lot more than what Trump himself, or even his wife, Kellyanne, seem to know. So Conway is always out there correcting the president in a way that shows that he’s not really a full-on Trump supporter.

I’m sure that’s probably caused many awkward conversations in the Conway household between George and Kellyanne, but at least it shows that maybe there is a member of the Conway family who is not just an absolute blind-to-reality Donald Trump supporter, so bravo, George. We appreciate your work out there holding Donald Trump accountable and correcting his many, many, many false legal statements. I just hope that it’s not causing too many marital problems for you there at home, because Kellyanne, as we know, will always be the most loyal Trump apologist and the most willing to tell lies on behalf of the president of the United States. Hopefully she doesn’t follow you on Twitter and can’t see these things that you’re saying, but if she can, might be time to pack up a bag and go stay at a hotel for a couple of weeks.