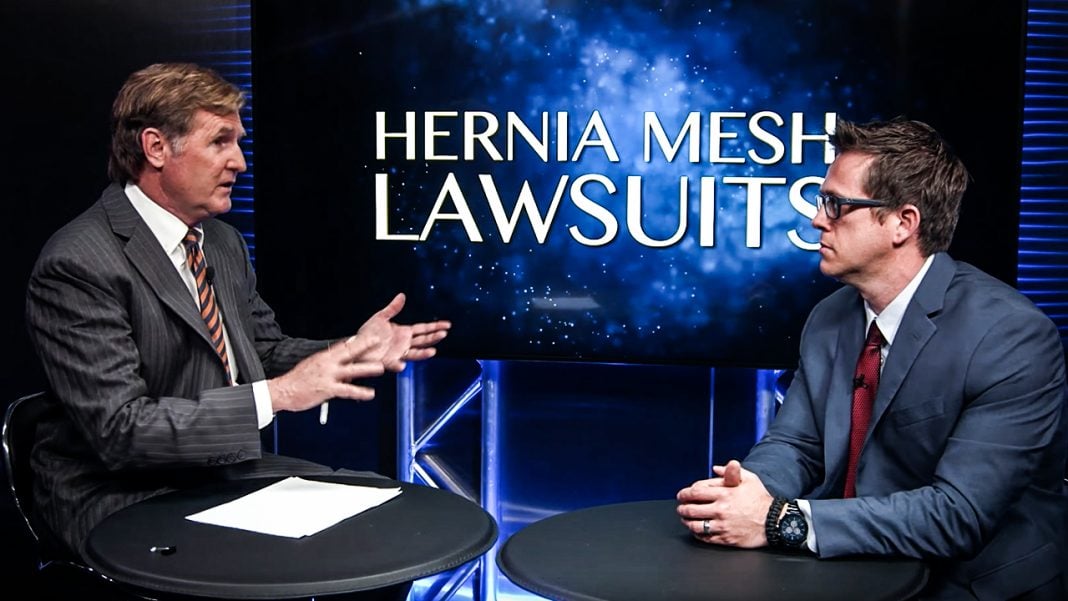 The story about surgical mesh that is being implanted in the bodies of thousands of people every day is not a story the corporate media would ever tell you.

In fact, they can’t tell you because their corporate advertisers the people who make this product won’t allow them to do investigative exposés about how dangerous surgical mesh really is. The advertising dollars are just too big for them.

Mike Papantonio: We’re about to un-ring a fire on Mike Papantonio here with Robert Price. Robert of course does, you’ve seen him on the show before. He does complex litigation all over the country, mostly with medical devices. So I want to talk to it right now. The story about surgical mesh, this being implanted in the bodies of thousands of people every day, is not a story that corporate media can tell you, because their advertisers won’t let them tell you this story. In fact, they can’t tell you because their advertisers, the people who make this product, not only won’t tell them, won’t allow them to do it, they’ll actually dry up advertising money if they tell stories like this.

So they can’t really do an investigative expose about this. The advertising dollars are just too big. So with me right now is Attorney Robert Price. He’s handling hernia mesh cases, and he’s going to tell us the story that you won’t hear anywhere else. Robert, first of all, has it, hernia mesh, it’s been around forever, we think it’s something that’s fairly innocuous they’re putting in human bodies all over the country. Give me your take on how bad this actually is, this hernia mesh story.

Robert Price: It’s really bad, Mike, especially in the past 10 years or so, because you’re right. Surgical mesh, and polypropylene, which is a plastic based mesh, has been used for decades in the surgical community. But what we’re seeing here is that these manufacturers are now making these, I kind of call them these easy kits for doctors, with these different meshes with these designs. There are experimental designs that they each use to try to jump ahead of one another in this market share race.

Mike Papantonio: In other words, somebody comes in with a hernia operation.

Mike Papantonio: It used to be that you had to have a special surgeon that could do that.

Mike Papantonio: And so the industry says, “Oh no, we’re going to make something where any doctor can do this. They don’t have to have special training. They don’t have to be a special surgeon. Just give them the kit, and let them go.” Isn’t that kind of what this industry is?

Robert Price: Absolutely correct. If you’ve got a really skilled surgeon, that surgeon doesn’t necessarily need mesh. Or if that surgeon does need to use mesh, it’s a small piece of mesh, or it’s a more complex procedure. So absolutely. It’s this sort of sales mentality, it’s like, “Well, anybody can do this. Here’s this special mesh. It’s easy to use. It’s got this coding, or it’s got this ring, or it’s got this special feature that makes it great.” And the special feature is completely bogus, and it’s unstudied, and it’s causing infections, and all sorts of massive, massive debilitating injuries.

Mike Papantonio: Okay. You saw this same thing. You kind of led the charge on the vaginal mesh. They were putting this mesh inside women’s vaginas, and inside they’re trying to hold up the kidney, and the urinary system. Explain that case, because this is just an extension of that, isn’t it?

Mike Papantonio: It’s the same garbage they were putting in women’s bodies.

Mike Papantonio: First of all, it was nothing different than just pure fishing line, that you could buy at a fishing store. Isn’t that kind of what this story developed into?

Robert Price: Right. Absolutely. So some years back, you’ve seen the Kugel Mesh litigation. This was years ago, where lawyers were bringing claims based on this defective ring. Then years went by, and we did the transvaginal mesh litigation, and we started learning about the behavior of these manufacturers, who are the same manufacturers essentially, just the hernia mesh manufacturers. You see a broad spectrum behavior of using mesh that’s not cleared for medical grade use. In fact, some of these manufacturers use polypropylene that actually says on the material sheet, “Do not use this in the human body.”

Mike Papantonio: Yeah, there’s a material data sheet, and the material data sheet shows how the product can be used, or how it should be used. The manufacturers understood because the document said, “Don’t use this to put in a human body.” But they did it anyway.

Robert Price: Exactly. And that’s just one component of the story. The other component of the story is on top of this bad mesh, you have these coatings, these chemicals. One company even uses fish oil. Just all of these things. An idea here is that they go to surgeons and they say, “Use this mesh laparoscopically. It’s real easy to do. You can place it right up against the bowel, and this fish oil coating, or this special chemical coating, is going to help keep it safe from the bowel.”

Mike Papantonio: So what’s the truth of the matter?

Robert Price: The truth is the coating either causes infections, or it just literally just wicks right away, and the mesh actually eats into the bowel causing bowel obstructions, massive surgeries. People even have to live in a colostomy bag because of damages caused by this stuff. All because of this kind of marketing transcendence that we see. Cheap mesh, no studies, slap it out to doctors-

Robert Price: … yeah. There are two types of studies you see. So you see the animal studies. Probably half the animal studies I’ve read are the animal studies show, “Oh crap, this stuff is killing these animals. Put those studies aside.” And then the other studies that they think are favorable, they parse out those studies and show those to doctors. No human studies. The only human studies, if you want to say, are the adverse event reports that we see after they’ve been implanted in thousands of people, thanks to our FDA, who doesn’t required studies to be done in the first place, on humans. I know you’re very well familiar with the 510(k) process, right?

Mike Papantonio: Well the 510(k) is where you have a company that says, “We have an item. We have a mesh that’s similar to the one that you want to put in the human body.” And so the FDA says, “Oh sure. Go ahead and do it. Have you done any longterm studies to figure out how humans are affected?” “No, not really, but it’s already out there, so we get to do it too.” Isn’t that kind of how that works?

Robert Price: Absolutely, it’s like you said. A lot of these products that are on the market are based on meshes 10 years ago. What’s not funny, but what is crazy about this stuff, is that when you have these experimental designs, the 510(k) application actually looks like this. It says, “This mesh is just like this mesh, this mesh, this mesh, and this mesh.” Well, say have you ever studied what would happen if you put all these properties together?” “No, it’s just like these meshes.”

Mike Papantonio: And again, the FDA says, “Oh yeah. That sounds like good science.” Here’s the truth of the matter. We don’t spend enough time as patients asking doctors A, “Could you do this without the mesh? Could you actually perform the surgery without the mesh?” The doctor’s going to say, “Probably not” Okay. “So get me the guy who can do this without mesh.” That’s the first thing. The second thing we don’t ask them is, “How much do you know about the studies that were done on this product that you want to put in my body.” All the doctor’s really confronted with is what we call the detail, or that’s the salesperson comes by their office, has cupcakes for them, says, “Doc, we’re so glad you’re buying our product.” They take them out to lunch. They’ll take them on these exorbitant trips, places like Hawaii, and have what they call a seminar, where they talk about their product. It’s just the biggest scam, and unfortunately, patients are too often too afraid to confront the doctor, and ask questions about the pill that they’re taking, or about what’s being put in their body.